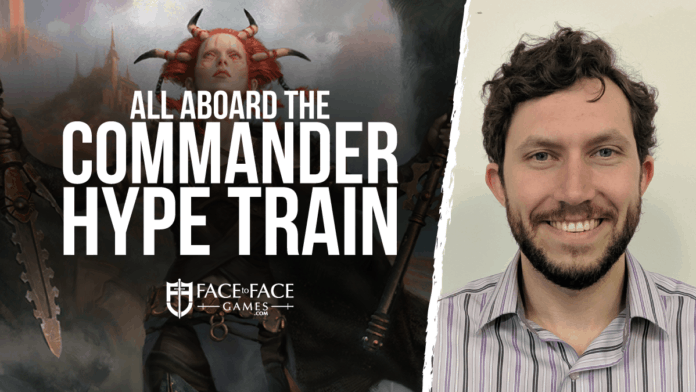 When I first caught wind of the HUGE Commander announcement from last week I was hoping for a few different things — gold-bordered reprints for Commander play, tiered budget Commander formats or official support for proxying duplicates of cards you own. But all of those would require Wizards to admit there’s a secondary market so I knew there was no chance. What I didn’t expect though, was what we actually got. Here’s the coles notes if you didn’t get a chance to catch this video:

Nine pre-constructed decks, 153 new cards, a dedicated Commander set (well explicitly at least, I’m looking at you Battlebond and Ultimate Masters) and “tonnes of reprints”. On the surface this seems great, but given my recent take on Wizard’s approach to Commander, I’m cautiously optimistic.

My largest point of contention with WotC as it relates to Commander has been their approach. There have been known problems in the format, and over the past few years the response was top-down. Boros needs to do something other than turn sideways? Here’s a commander that doesn’t do that, but it doesn’t do anything else. Need to get new players into the format? Here’s a Commander deck you can build from all the cards you draft, but the best cards for the deck are from the block. Is this a legendary creature for Commander? Let’s make it draw cards. All of these examples are covered in more detail in my article linked above, but ultimately, they net out with two negatives: reducing the room for creative deck expression and setting a high price expectation.

So why is this important for talking about this announcement? Well, WotC takes a long time to do things, especially when it comes to R&D. If you break it down, building a set (or product) involves hundreds of people: planning the story arc, developing the mechanics that tie to the arc, designing the cards, commissioning the artwork, play-testing the cards, revising designs based on play-testing and finally moving into manufacturing and shipping. In the announcement, Gavin explicitly stated that he’s been working on Commander Legends for years and that it’s been tough to keep his lips shut on it. If we take this at face value of a minimum of two years, this puts us in 2017, when the philosophical approach started to change.

If all of these Commander products have a similar design philosophy as some of the recent approaches, we could see a lot more blunders, and on a very large scale. I truly hope that the recent strategies employed were dropped before these product cycles started. But given what we saw with Brawl Commanders, I’m holding my breath. Keep an eye on the Legends in Theros: Beyond Death, as that’ll be a good indicator of what we can expect from this product.