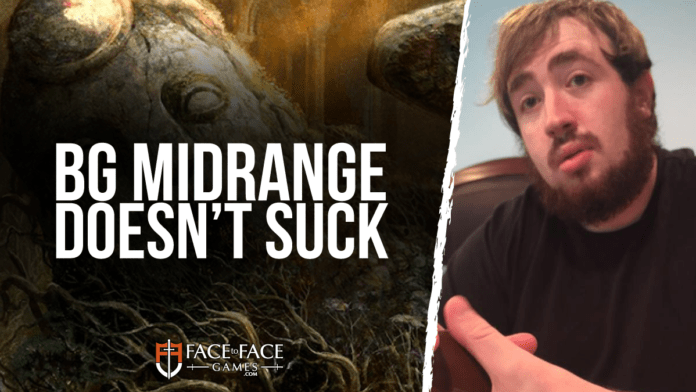 I was 11-2-1 going into the last round of the tournament, where I was paired against my Team FacetoFaceGames.com teammate, Edgar Magalhaes, in the last round and since I was mathematically locked out of Top 8, we played. He won in a close 3 games coming in 9th and I came in 32nd.

Prior to Jersey, Golgari was thought of as the format’s front runner by a lot of the community. That said, zero copies showed up in the Top 8, so in the wake of Jersey the community has begun to doubt this midrange strategy.

I’m here to tell you why it’s still good.

My plan for this deck was pretty simple: ramp into Carnage Tyrant. I had gone through a lot of iterations of the deck. I ended up cutting Vraska, Relic Seeker the day before the GP to lower the curve and lean-out my draws. Carnage Tyrant is extremely important in both the mirror match and against Jeskai Control — which was a breakout deck in Jersey.

You’ll also find zero copies of Golgari Findbroker in my list. This could be a mistake and while I wouldn’t run more than one, the card gives a lot of depth to your gameplan by giving you the option to recur planeswalkers. The reason I ended up cutting it was twofold: first, I ultimately I felt like the body was largely irrelevant. Second, the cost of taking a turn off to re-buy a permanent from your graveyard was too large.

In other words, I wasn’t sure if it was worth spending a bunch of time spinning your tires with Findbroker. I wanted to beat down my opponents with Carnage Tyrant.

Like I said , there was a lot of hype around Golgari Midrange headed into the double Grand Prix weekend in Jersey and France. While Golgari Midrange did put two copies into the GP Lille Top 8, the deck that really came out as the front runner in Standard was Jeskai Control. Let’s take a look at the full breakdown of both Top 32’s betweenGrand Prix Lille and Grand Prix New Jersey:

So what happened to the “dominant force” that was Golgari Midrange?

Izzet Phoenix rose to prominence this weekend as a way to beat Golgari and my guess is that the surge in popularity of that strategy really inhibited the full success of Golgari. On top of that fact, I believe that while the matchup is certainly close, Jeskai Control is a slight favourite against Golgari.

Izzet preys on Golgari’s weakness to flyers by leaning on Arclight Phoenix and Crackling Drake as threats that provide a long term advantage and also attack in the air.

Along with this, I also believe that many players have outdated technology when it comes to approaching the control matchup. Last format a great card that black decks could turn to was Arguel’s Blood Fast. However, now that Jeskai Control decks are packing Expansion // Explosion, Crackling Drakes and other sideboard creatures such as Rekindling Phoenix the life loss that you incur from drawing extra cards in that matchup is too severe. A great option to turn to instead of Blood Fast is Treasure Map. Map is a cheap way to sculpt your draws before turning into a nice source of card advantage and doesn’t further your weakness to these flyers.

Duress is another card that has gotten worse against the control decks. Don’t get me wrong, I still believe that it is a good card against them and one that you should have in your sideboard, but the Jeskai Control decks have multiple Rekindling Phoenix post-board and sometimes even Siege-Gang Commander. For that reason, I wouldn’t maximize Duress in the sideboard. Instead you can use Sorcerous Spyglass as a “fourth” Duress that can shut off things like Teferi, Hero of Dominaria.

To deal with Izzet Phoenix, there are a few options you can turn to. Necrotic Wound is a cheap tool that is useful against Arclight Phoenix, but it can be a bit unreliable. Jonathan Sukenik had a pretty nice piece of technology in his sideboard in Reaver Ambush. This card is good against a variety of threats in Standard and is one that I think should be in more sideboards going forward. It even answers another problematic creature that rose to prominence this past weekend: Tocatli Honor Guard.

Learning to tackle these problem permanents is going to be essential to Golgari’s success moving forward.

I played against Tocatli Honor Guard a bunch this past weekend, and while I emerged unscathed for the most part, if unanswered it can be a huge problem for Golgari. This was something the Brad Nelson discovered being the Standard master he is, and he sported four copies in his main deck! I’ve typically found Boros Angels to be a good matchup for Golgari Midrange, but his list seems like it has more game against it than most others I have seen.

Another problematic card that cropped up in response to Golgari this past weekend was The Immortal Sun, which is a nice piece of technology in Brad’s sideboard. Golgari can start sideboarding things like Reclamation Sage or Thrashing Brontodon to help answer this. I’ve found Thrashing Brontodon to be very underwhelming in the sideboard of Golgari, but it does dodge Tocatli Honor Guard, which Reclamation Sage does not.

There have also been Golgari lists that have forgone planeswalkers and play their own copies of The Immortal Sun. I’m not a big fan of this approach mainly due to Carnage Tyrant being a much more impactful card for six mana, but it is a tool that Golgari can use.

Going forward with Golgari, I definitely think it will maintain its spot as a top contender in this format. The archetype has a lot of room to adapt and I think that finding those correct adaptations will prove to be what ends up being successful in this format. I’ll be trying to find the best Golgari Midrange deck out there for the Pro Tour and I still think the deck is great!