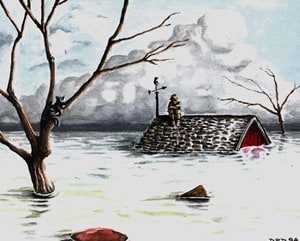 Whether you are a person new to the game, just coming back to it, a long time grinder or a kitchen table, most can agree that Magic is a big social engine. It opens paths for friendships between people that would never interact otherwise (like watching a 10-12 year old chat with a 30+ family man about their latest Commander game) and forges local and regional communities that complement one’s lifestyle as much as you like to.

While this happens in many other social circles, the Magic community is unique in the sense it always expands and encourages everyone to add to its greatness, the advent of Twitter lets us hear praises about our community all the time and observe how with every passing day there might be a new podcast, site or blog made by players that love the game and want to share their experience with it (one day we might see a rant blog about #banJace, the next day a podcast for cube, and later a site for Magic design, and I could go on all day!)

Just remember your content has to be entertaining to avoid this:

With so much content getting on the Internet everyday, people will get overwhelmed with ease and may never get to see it, seeing we are used to checking our pet sites (mostly SCG, CFB, the mothership, MTGCast, and 1 or 2 friends’ sites), that’s when this experiment was born!

As we know, most new Magic independent content doesn’t get enough exposure unless they manage to be mentioned on a popular podcast, SCG/CFB/Mtg.com or have a big Pro on their side.

Why not change that?

I’ve been breaking my head wondering what I could give back to the Magic community, and after a long time (and obviously KYT’s enthusiasm) I decided to take a cue from GatheringMagic’s This Week in Magic/Twitter series and copy their concept (brilliant right?) to put on the spotlight one source of Magic goodness each time! (not sure how often I may get to do this but aiming for biweekly probably).

As strange as promoting other sites/blogs/etc sounds, it’s the spirit of our community that allows this (because unless you’re SCG or CFB, you don’t aim to be the main/only Magic source of content for your readers), most of us want to be heard, get input on our ideas, make connections for a future playtesting group or just make more friendships with people that love the game as much as you do.

And maybe adding things I think they could improve upon, among all this hugfest 😛

One example could be 60cards.com and ManaD latest joint article by @Smi77y, which you want to check 😛 (you can even choose which version is prettier to look and read, lol)

Today’s focus falls on a recent blog that has been churning good content and is not getting enough exposure in my opinion, you may have heard of some of the blog’s team on other sites but all of them share something: their love of the game.

Now, while some of you may get immediately discouraged by the lack of pros (yes, not every site can have star power backing them, shocking I know D: ), do not be. They are constantly churning quality content on most aspects of the game and in various forms (1st article and I already cheated on the spotlight for one element thing seeing they also have a podcast!).

Let’s give them a brief intro in case you’re lazy to check their author bios:

Amanda Stevens (@Sagegnosis) : Long time player, mostly focusing on the casual side and formats of the game, which normally involves multiplayer. As of this writing, she also has done interviews with our CEO and #mtgrockstar KYT and Patrick Chapin, the Innovator.

Joseph La Dow (@pureval) : A mostly casual player. While he may not get to play as much as he wants, he follows most of the happening of the game and has an interesting style and perspective in his articles.

Sean T. Patchen (@SwordsToPlow) : Resident Commander expert and also an alter artist. He has a good grasp on most of Commander’s basic concepts and deckbuilding process and every once in a while holds contests to encourage creativity and feedback. Good showcase of the Commander spirit if you ask me.

Stijn Lamers (@Stidjen): What one would consider a casual Spike (I love how ironic that sounds). Showcasing the process a kitchen table player goes about building and tuning their decks to win, highlighting the card selection process and deck techs while also having fun.

Bradley Rose (@bradleyrose) : Magic designer, participant on the GDS2 and among the top 101. For anyone that followed the GDS2 I’m glad to tell them Bradley’s articles promote collaboration in the creation of a Magic set and design principles, allowing practice on your design skillset, interaction and constant feedback.

Brook Gardner-Durbin (@BGardnerDurbin) : The writer that most closely fits the Spike grinder mold some people are used to, also has written for other sites. His content so far covers theory and ways to improve your play, cementing a strong base before you end focusing on the deck lists and tuning.

Luis Acosta (@AuranAlchemist) : In charge of giving us lots of video content with commentary across various formats. Seeing the love people have for the video format, he’s a consistent source of new content and it’s refreshing to see his progress as a player in the videos.

There are a couple other writers and also guest writers on the site, but the ones above are the ones I wanted to highlight due consistency (still recommend to read every article there though! :P)

The blog has a simple design (and obviously his colors match the name :P) and its slowly growing and finding its place on the community, giving diversity in content and fledging writers that are easy to talk to, seeing most of them can be find on twitter and are always friendly and helpful.

As an appetizer for you readers, some of the authors took the time to choose an article that showcases their article’s focus and gives you a taste of what you should expect from them:

Here Amanda takes a deviation from her usual articles regarding casual formats to touch a bit on players’ etiquette when playing, how perception on certain words greatly varies and affects different player circles. It’s an article to read with an open mind and from the beginning to end to appreciate its value, showing not everything has to be EV+ to be worth checking.

While Luis is most of the time the author that pumps videos on the site, on this article he decides to shares his insight on one of the most loved/hated birds from recent times and their role in non-Standard formats. Despite how silly the title of the concept may sounds, give it a read and check the related videos to decide for yourself.

Unlike the previous authors who decided to highlight articles where they went out of their main element, here we can see one of the best examples of Sean’s writing style and approach to the Commander format. It’s hard to describe it without spoiling you details, but it’s mostly assured if your mind is not blown after reading it, you nonetheless would have a new insight on how to build for Commander (I dare say you can even take that lesson for most formats too!).

Back to out of the norm articles with Stidjen’s featured article it seems, even makes you think most authors only like their own work when they do something completely different than what they do normally! Only thing I can say is it’s a really refreshing and fun approach Stidjen chose for this article, may even inspire others to try it in the future seeing its really creative.

Joe La Dow (@pureval) From Outside the Game #2: Dial Legacy for Murder

Joe might be an author you might miss while skimming on the site due his style and focus, but once you get into it you can’t help but appreciate the angle he takes to show his feelings regarding the game from his unique perspective (spoiler: It’s the column’s name)

Overall, you may think the site may not have a heavy focus on the spikes out there, but it’s not until you start seriously reading the articles that you may see it’s focused for any kind of Magic player, whether it’s the modo grinder looking for his dose of videos to the Commander player everyone hates for aiming for the win (seriously? trying to win a game? shame on you people).

Red Site Wins is a perfect example of the current emerging sites, trying to find a niche and/or loyal fanbase so it can expand and help the community grow due their love of the game. They even got SCG Open Grinder Chris Van Meter (@Chris_VanMeter) to join them with an articles! Check this sample one 🙂

Overall, I think Red SIte Wins sets a good standard for this experiment, so…

With this I would want to close this 1st attempt to do something new (maybe not so new, but fresh?) but just adding a small bonus:

Apparently Canadian Magic players have lots of problems to get to their local events, so Luis would love if you could give the following link a view:

Help a Bro to get to GP Montreal

For the lazy ones, Luis needs some help to get to GP Montreal and is asking help from us, seeing we’re so awesome and helpful 🙂 Obviously, he is not expecting help without giving something in exchange so click the link to see current prize pool and more details. #freedual says anything to you? What about #freeBob? #freeFow perhaps? I’m actually curious why so little support with such an awesome prize pool.. you can donate and then gimme your spoils if you don’t want ’em 😉

Hopefully you like this idea enough to have another article soon, if you have any ideas/suggestions/postulations for next focus/shameless promoting of this idea, you can always contact me via twitter @OreoCorp.