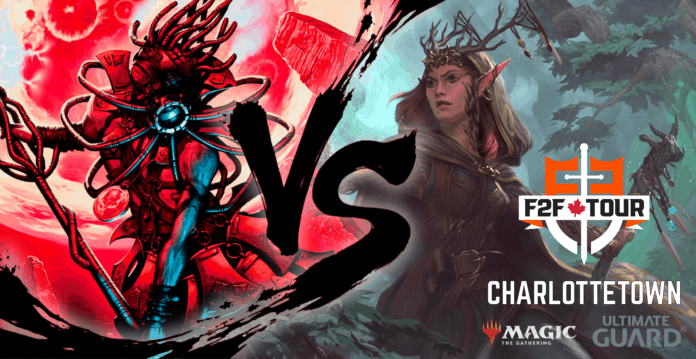 Even in a format with turn-two Primeval Titans, lightning fast Ad Nauseum kills and powerful finishers like Jace, the Mind Sculptor, every now and then the little green creatures get the job done.

And that’s what happened this past weekend when the F2F Tour stopped in Charlottetown, Prince Edward Island for a Modern event. Sebastian Steffe and his Devoted Druid combo deck conquered the entire event.

Steffe was able to take down Adam Joyce and his Ponza deck in the finals.

Druid is in an interesting spot in Modern these days. It feels like each and every set provides new toys to battle with and Theros Beyond Death was no exception. The addition of Heliod, Sun-Crowned gave the deck even more explosive combo potential with Walking Ballista and Spike Feeder offering you infinite damage and infinite life as early as turn three. It’s as easy as casting one Collected Company finding a Heliod and a Feeder and boom, infinite life.

And this strange collection of combo enablers and value engines was everything Steffe needed to come out on top last weekend.

Joining them in the Top 8 was Chris Brennan playing the Snowblade deck that’s been picking up in popularity lately after the printing of Uro, Titan of Nature’s Wrath, Jean-Francois Lamothe playing an old classic in Skred Red, Greg Mahen  and Cole Clarke on Jund, Gavin Grant on Mono-Green Tron and Matthew McGee-Herritt combo-killing with Ad Nauseum.

Now, with the banning of Once Upon a Time on Monday, Steffe’s deck certainly took a big hit right after he brought home the trophy. Granted, Heliod Company remains an extremely explosive deck that can really exploit a metagame that isn’t filled with Lightning Bolts and Fatal Pushs. It’s not like this banning is going to completely remove the big mana decks that are making it hard to play spot-removal, so Druid might be here to stay at the top of the metagame.

With that said, the clear next step to me is the exploration of these Uro midrange decks like the one that Chris Brennan piloted all the way to the Top 4 on Saturday. These Stoneforge decks, the Urza, Lord High Artificer versions and the Cryptic Command control decks all featuring the three mana titan as their finisher are all primed to blow up in Modern from where I’m sitting. So, if you’ve got a Modern event coming up I’d give Brennan’s deck a shot.

Congratulations to Sebastian Steffe and to the rest of the Top 8 on their outstanding performances this past weekend. Before I leave you for the week, I’d like to also extend a special thank you to both our judge staff and our sponsor Ultimate Guard for helping us put on a great event.

Now, normally before I give you the decklists you came here for, I’d let you know what’s next on the docket for the F2F Tour in the coming weeks. But in an effort to reduce the spread of the COVID-19 virus, Face to Face Games has decided to cancel a number of events in accordance with the recommendations made by Health Canada. If you’d like further information on how the Tour has been impacted, please see our article on the subject here.

In the coming weeks we’ll be closely monitoring the situation and if anything changes, you’ll be the first to know. We hope to see you on the F2F Tour soon!