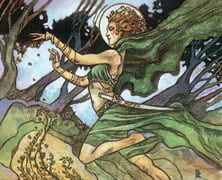 Why do we play Magic?

The reason I ask is this, is that recently there has been a fair amount of discussion in regards to a certain date and article that was posted on Gizmodo. If you are one of the very few who has yet to read it, it can be found here.

There was upset and outrage over the fact that someone, especially a writer for Gizmodo, would form an opinion of a person based solely on one of their hobbies. For my part, neither the original judgment nor the response came as much of a surprise and to share my point of view let me offer a story.

I’ve been playing Magic for almost fourteen years. When I started I was in elementary school and pretty much any guy at our school was playing cards as well. It was the thing to do in elementary school; first it was marbles, then it was Pogs and finally it was Magic.

High school is where there was a dynamic. Let’s say I was a “closet” Magic player in high school. I played at the store but the only times I brought cards to school was when I had detention and to casually play against some kids who were hiding out in the same teacher’s class during lunch hour. Playing sports and having a decent knowledge of music let me escape the “Nerd” or “Geek” label even though I still read comic books and played Magic.

I realise no one figured they would be reading about the O.C. on a Magic site but bear with me. The lesson I learned was this: While “Geek Culture” may be cool, geeks are not. See on the show was a character Seth who was into comic books and geek stuff. All of a sudden every girl in school seemed to be in love with Seth and being a geek appeared to be cool. It was not.

I remember one conversation I had with a couple girls who were going on about miscellaneous things related to geek culture and how that was so cool. When I explained to them that I had comic books and knew actual content about the subject, I learned a very interesting lesson. The cool people who watch the show and pretend to act “Geeky” are cool whereas, again, geeks are not.

To this very day that has not changed for a moment, when I explain to people I am an editor and writer for a website I use the phrase, “Hobby Site For Cards”, which they misinterpret as poker and the conversation moves on. The reason I do this is simple- Magic is a hobby that I enjoy very much but, outside of the local players, no one else has any interest in the game. As such, I do not feel the need to burden someone with details. If only people who played golf could get the hint, things would be better!

This brings us back to the Gizmodo article.

Geek culture will never be accepted. Yes, some celebrities will sometimes wear T-Shirts with the Batman emblem or they may go and see the new comic book adaptation movie but you won’t find someone going on about the new Magic set on Entertainment Tonight. As stated before, brief forays into “Geek Culture” may be cool and accepted, but immersing yourself in “Geek Culture” is not.

So the author’s reaction did not come as a shock in any way. Before you jump on me that is not me saying it was okay to do what she did, because it wasn’t. While each person is allowed to have such opinions, to be expressed in such a manner is very distasteful and honestly disgraceful. So while many jumped on her for “attacking” the Magic culture and “Geek Culture” to an extent, honestly they should have been attacking her because she clearly is missing some basic human decency. I will say this though, you have to give her some credit for actually going to see a play about Jeffrey Dahmer’s life instead of just running away right then and there. I mean even I wouldn’t go and see that so I can only imagine no girl really wants to go see that.

So why do we play Magic?

While I may have started playing Magic initially because it what my friends were doing, I continued till today because it’s fun. I never played in hopes of being accepted by people or to be the greatest there ever was, instead it’s because I’ve enjoyed doing so. Yes winning is nice and yeah it’s fun being able to talk to people about your hobby but simply I enjoy the time spent playing Magic. Even if the “Cool Kids” don’t think it’s cool.

There will be those who disagree but for the most part they will be the same people who aren’t truthfully honest when answering that one question.

Last week I mentioned I would give you a tournament report of the weekend’s Standard and Legacy portion and it will be short. For Standard, I faced two Pyromancer Ascension decks in a row which is a terrible matchup for me. I did win one of the games, but I lost both matches knocking me out of Top 8 contention.

As for Sunday, I was offered tickets to go see the Alouettes play (Canadian Football, for those who don’t know) though I did test out Volrath’s Stronghold in Aggro Loam and it was fantastic the entire time. In the future rather than doing a full-fledged deck tech like I had originally done, I’ll add in some foot notes about where the deck is heading and the changes that I’ve tested. If you have any suggestions pass them along.

So we covered very short tournament report and topic that superficially deals with Magic, what is missing? Oh that’s right something that is actually Magic. I do have three deck ideas currently brewing for the next Standard, environment but I also want to wait a little bit until Innistrad has been revealed in full. At the time I am writing this, Salvation has 164 cards that have been spoiled, so there is still unknown information I am waiting on before any new brews come out.

Speaking of rotation, here is a quick farewell to all the cards of note, that will be rotating.

Now there were so other cards that saw play like Emeria Angel or Ember Hauler that I skipped over but I didn’t want to include every card. What’s interesting when seeing this list is one’s initial reaction is something in line with, “Wait, that’s pretty much all of the good cards.” It’s not but it is a lot of them!

As you are reading this, the festivities for GP Montreal will be underway so I suggest everyone come down to the Palais Des Congres if you have the chance, even if you can’t play in the main event. There will be a large contingency of Mana Deprived players around as well as a bunch of events so come check it out, it will be a blast.

Also our sponsor, Face To Face Games, will be vending and to celebrate the GP they have a promotion going on where all singles are 10% off on the website, so check it out, if you’ve been waiting a while to pick up some key cards now is the time to do so.

Finally a quick shoutout to Buy More Cards, I placed an order with them for Modern stuff before the massive price hike and rather than trying to screw me over, they shipped me everything as ordered, even paying the shipping because they made a small mistake. They have a smaller store but check them out, you can always find a hidden gem.

So with that, hope to see you at the GP. I will be wearing the shirt with my last name one the back and till next time, Have Fun Playing Magic!