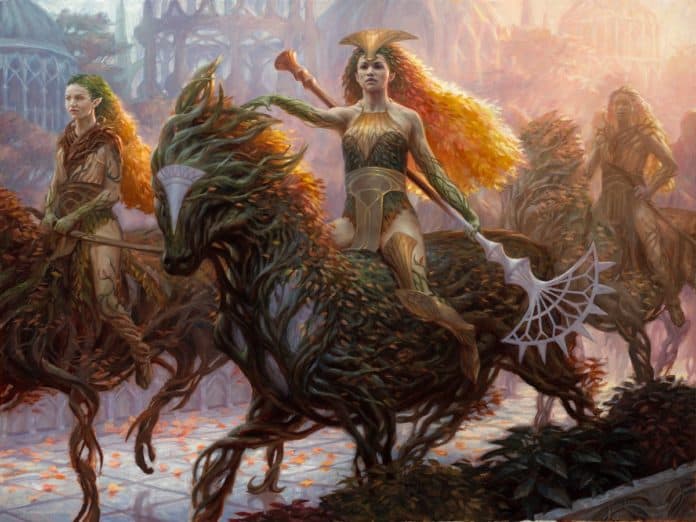 It’s been a while since I last wrote an article on my preferred archetype in Legacy. In fact, last time I wrote on Legacy Maverick in general, Deathrite Shaman was legal! However, lately, I had the opportunity to attend and play my beloved deck at Magicfest Niagara Falls, to a 11-4 finish. After the tournament, it turned out that I was alone with the deck to have a good finish, and I got a lot of messages and questions on Facebook. After realizing that I was answering a ton of different questions here and there, I thought that it was time to write an article with my thoughts on the deck, and what I see moving forward.

First things first, here’s what I played in Niagara Falls.

I tested a lot online and in paper. Eventually, this is what I converged to. It changes a lot from the days of Deathtrite Shaman, when I would even run Leovold in my maindeck, as a testament to how greedy you could be with a few shamans in your deck.The list used to be with a heavy black splash, but eventually the only real black card left is Zealous Persecution, that I could not replace in order to cut the whole splash (I even tried to play Walking Ballistas just to see if they could let me cut Zealous Persecution!). I tried to play a lot with the numbers, eventually this was the list I was able to reach the most consistency. As you can see, the list by itself doesn’t change a lot, as the core of the deck is still very good. the trick is always to find an adapted sideboard, and the right support cards for that core.

Why did you cut your thoughtseizes? And what about Abrupt Decay?

At that point, I started to look for something else that could help me. It brought me to Chalice of the void, after seeing Phil Gallagher using it in Death and Taxes. The theory was that on turn 1, Chalice on 0 gives you more chance to survive through your opponent’s turn and untap safely, while on turn 2 you get to stick it on 1, and then it’s a real problem for those cantrip filled combo decks. It also turned out that Chalice is really good against Miracles, a problematic matchup. I was cutting a lot of my 1 drops after sideboard, and so Chalice on 1 was not hindering me that much, but powering down their cantrips and Swords to Plowshares was big game. And so, the Thoughtseizes were cut. A bit later, the green black removal cards were also cut for Council’s Judgment, that I preferred with so many True-Name Nemesis running around at the moment. After all that, the only black card left in the deck was Zealous Persecution, but it turned out that it was too good to cut, especially when it deals with True-Name Nemesis efficiently.

It’s the newest addition to the deck. what the deck primarily lacked was a way to have a source of card advantage that can actually bury your opponent. Palace Jailer fills that bill nicely. When it lands, the monarch helps you have a free Howling Mine, or so to speak, and even better, it forces your opponent to do some very shady attacks in order to gain the monarch back. Sometimes their attacks can be so bad that they have to leave themselves open to a brutal crackback (thanks to a giant Knight of the Reliquary). Just remember that it might be dangerous to play him if you don’t have a decent board against True-Name Nemesis, however creature light decks can get eaten alive by the monarch, namely Miracles and 4 Colour Loam. Those are matchups where being the monarch can turn the game around in a heartbeat. The Journey to Nowhere effect is often gravy on top, I usually slam my Jailers even without targets. I am strongly considering cutting Gideon from my sideboard to play a second Jailer.

Your sideboard has 3 Chokes? Do you hate blue decks that much?

YES. But more seriously, it’s your best card against a lot of decks, and seeing one early is often key in post sided games. Grixis decks can’t even take it out of the field at all. Against Delver variants, it’s the final nail in the coffin. Some opponents will even apply the age old logic of siding out their Force of Will because they are historically bad against decks like Maverick, and those you can punish even harder. A quick word of advice, I would not try to wait for my opponent to be completely tapped out before playing it. If you see an opportunity, and if you feel like your plays are well mapped out, slam it, and force them to answer it. The usual blue decks that can answer it (read: blue white decks) usually have 4 cards post board that can kill it, most of the time 2 Disenchants and 2 Council’s Judgments. Your job is to overload those removals. 2 Chokes in your sideboard was the norm in the past, I think you need 3 nowadays, and I would not skip on those.

How do you fare against Combo decks?

Your combo matchups are actually very fine, at the sole exception of Sneak and Show. I actually took the decision to abandon this matchup because the new lists running Omniscience along with Sneak Attack were too hard to combat, and I ended up playing against it twice on day two of Niagara Falls. I lost both these matches and they were my only losses on day 2. At the time I took the decision of packing more graveyard hate because I was more concerned about facing turn 1 Griselbrands as a whole, which I expected in greater number in a Grand Prix. You can make the Show and Tell matchup sightly better if you cut some of the graveyard hate and play hatebears like Containment Priest or if you play Thoughtseize to make them discard their enchantments, but in my experience, it’s still not a great matchup.

Speaking of Reanimator, your greatest fear is turn 1 Griselbrand. You can actually beat their slower draws, even without graveyard hate. Sometimes it requires you to do some very weird stuff, such as having a Mother of Runes and a flyer to block Griselbrand forever, but the games you lose for sure are the ones where Griselbrand shows up before your turn 1.

Finally, Thalia and Gaddock Teeg to a lot of work against the critical mass combo decks (namely TES and ANT), so you want to use Chalice of the Void as a supplement to those. I like putting it on 0 in order to block Lion’s Eye Diamond and Lotus Petals (or other form of moxen if you play against TES).

How do you think the deck rates nowadays?

I think it’s easily one of the most underrated deck in the format. If you look at the top decks of the format right now, you actually have an even to good matchup to a lot of those decks. Your worst ones are Miracles and Sneak Attack, and out of those, only Sneak Attack is the very unfavoured one. As such, the deck, on paper, is a very reasonable choice. The deck does have a problem however, and it’s that tendency to be bad against the other strategies in Legacy. You are very good at combating the Delvers and the GB Depths decks of this world, but you are terrible at playing against the less common strategies you get to see, such as Nic Fit, or even burn. It makes it that for long tournaments, you can pick up losses easily because of how varied Legacy is, and you don’t have a get-out-of-jail free card like blue decks often have with permission spells. If you want to play this deck in a GP, I would strongly advise having byes. You have a much better chance to play against a deck that you are geared to fight against.

How do you change the deck if the London Mulligan gets adopted?

I would expect an uptick in Stoneforge decks, in Reanimator, in Show and Tell decks and in Chalice decks. That’s the kind of metagame I would think we would be heading for, in the long run. I would probably go back to running more Stoneforge Mystic, and play Batterskull again first, as a way to fight the uptick in Chalice of the Void decks. I would probably lock in at least 4 graveyard hate cards in my sideboard, and you might want to play a bunch of Thoughtseize again as a way to fight Show and Tell decks. My starting point would probably be this: