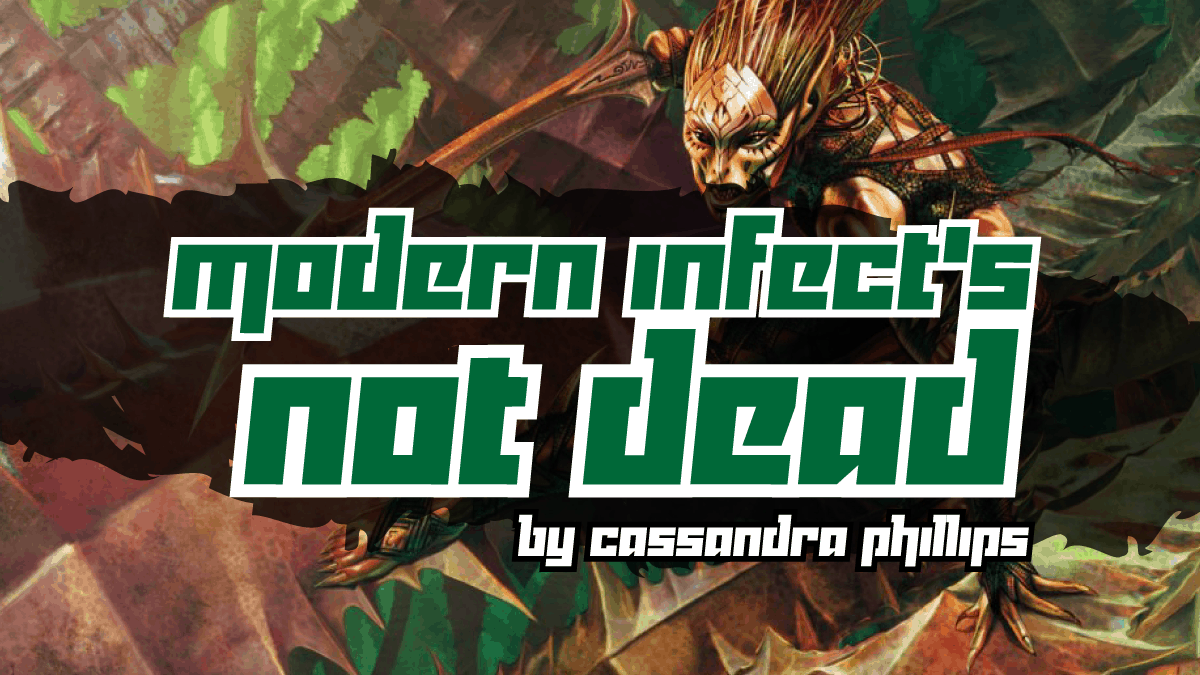 Now, you might be asking, “Cass, should I windmill slam Infect at the next event I am playing at?” That depends. I know that is probably not the answer you are looking for but hear me out. This weekend really changed my experiences playing Modern and showcased the art of playing a powerful off-meta deck like Infect.

I play a lot of Modern around Toronto and have historically almost exclusively played Affinity. I’ve been playing the deck for almost three years now and am very comfortable working through even the most complicated situations. In my experience the best thing you can do in Modern is become very experienced with a deck and play it well. Don’t worry too much about positioning; the field is so broad that you can’t ever account for everything, and you might just get unlucky and hit bad match-ups anyway.

Everyone was so afraid of Lantern after Pro Tour Rivals of Ixalan that people stocked up on extra artifact hate in their sideboards. My opponents curved [Card]Ancient Grudge[/Card]s into [Card]Reclamation Sage[/Card]s into [Card]Hornet Queen[/Card]s and I sank into a 4-3 drop. It did not feel great.

This experience lead me to totally rethink the way I approached Modern and in particular how I decided to choose decks. As GP Hartford crept up, I opted to make a meta call instead.

The decks that I thought were best positioned going into GP Hartford were Humans, Affinity, Hollow One, Bogles and Mardu Pyromancer. Four out of five of these happen to be linear decks with very little disruption and can kill around turn four. Four of those five decks also struggle to interact while advancing plans of their own, and Infect, being a turn-three deck, demanded copious interaction. So I felt being one turn faster was where I wanted to be.

Mardu is rough and [Card]Collective Brutality[/Card] is absolutely disgusting, but I liked my odds. I also liked my newfound apathy for [Card]Stony Silence[/Card], a feeling I never enjoyed before but could really get used to going forward.

Infect is also very good against any deck that requires set-up time. Decks like Tron, [Card]Ad Nauseum[/Card] and [Card]Scapeshift[/Card] cannot proactively initiate their game plan or they will just lose on turn 2 or 3, so they have to slow down to be disruptive, and Infect can win those purposeful games, too. The deck mostly struggles against the more midrange decks as well as Burn, but it turns out, decks like Jund and Burn are on the downswing due to their poor Humans and Hollow One match-ups.

The more I looked at it the more Infect stood out to me. It is faster than the fast decks. It does not care about large amounts of lifegain like in Bogles or Affinity. It easily beats the slower decks, and its worst matchups, with the exception of Mardu, would be underrepresented. With all of this, it felt like a good time to play Infect.

All said and done, I went into Hartford with the feeling that Infect was solidly positioned and unsuspected. Provided I could dodge Mardu Pyromancer, I would do well. This is the decklist I ended up registering for GP Hartford.

The main deck is a fairly stock list, with one [Card]Dismember[/Card] to deal with problem creatures and two [Card]Spell Pierce[/Card]s to hedge against everything else. Some of my more interesting choices came in the sideboard.

[Card]Spellskite[/Card], a former champion of Modern during the days of [Card]Splinter Twin[/Card] that was hard for Infect to beat, now languishes in trade binders allowing me to free up valuable sideboard space by cutting [Card]Twisted Image[/Card]. With that I could spend all of my extra space focusing on Mardu. [Card]Echoing Truth[/Card] is the truth, a versatile solution to how they clog the battlefield with tokens from Pyromancer, Souls or Rabblemaster. This card also serves as a great catch-all to deal with Bogles and [Card]Collected Company[/Card] decks and offers additional outs to [Card]Chalice of the Void[/Card].

[Card]Kitchen Finks[/Card] is in there to grind against Jund and to gain life and stall the board against Burn. [Card]Pulse of Murasa[/Card] fills a similar role, letting you regrow Infect threats binned by discard and spot removal. [Card]Grafdigger’s Cage[/Card] is a good answer to [Card]Collected Company[/Card] decks and is a cheap, mana efficient piece of interaction against [Card]Hollow One[/Card]. I expected not to face Dredge and Living End is favourable for Infect, so I opted for the mana efficiency of Grafdigger’s Cage over [Card]Relic of Progenitus[/Card] as my token graveyard hate-piece.

Briefly on sideboarding: I cut cards in the flex slots that are not relevant in the match-up first. Those being the Blessing, Pierces, [Card]Dismember[/Card] and [Card]Distortion Strike[/Card]. Next, I typically go for some number of [Card]Mutagenic Growth[/Card]s against match-ups that pressure your life total and [Card]Might of Old Krosa[/Card]s against decks that have a lot of spot removal. Finally I shave either a Hierarch or [Card]Dryad Arbor[/Card] for the last spell. In general, like all linear strategies, less is more in sideboarding; I try to disrupt my gameplan as little as possible after board with the exception of midrange match-ups, where you have to do a lot more to salvage the post-sideboard games for Infect.

My plan worked very well and I beat decks like Affinity and Elves by being a turn faster than them, and decks like Scapeshift and Tron by not letting them initiate their game plan at all. All the while, unsurprisingly, I never faced a dedicated hate card.

Playing rogue or off-meta strategies offers the benefit of catching sideboards off guard in a format like Modern, where hard hateful answers reign supreme games two and three. Matches of Modern are won or lost through their sideboards, and throughout the weekend I heard again and again from opponents that they had “no good sideboard cards for Infect.” Since [Card]Gitaxian Probe[/Card] was banned and [Card]Fatal Push[/Card] was printed, the strategy has largely fallen off people’s radar; cards like [Card]Spellskite[/Card] that used to be in almost every board are now in none. I set myself up to not have to worry about any hate cards coming in against me post-board, which allowed me to keep to my main game plan intact and keep consistent turn three kills.

My only losses were to Mardu Pyromancer, Grixis Death’s Shadow and G/R Tron. Mardu and Grixis went about as well as anyone would have expected: they put pressure on me and interacted favourably with all my cards. The Tron match, well, [Card]Walking Ballista[/Card] is a hell of a Magic card.

Would I recommend you play Infect? I’d recommend you think about your meta. If you expect midrange to be underrepresented and aggro and combo to be overrepresented, then Infect is an excellent strategy to punish those decks and show them the glory of Phyrexia.

Want to try out Cassandra’s Infect list at a local event? Come out to Face to Face Games Toronto on May 6 for our Modern 1k Sunday Showdown!