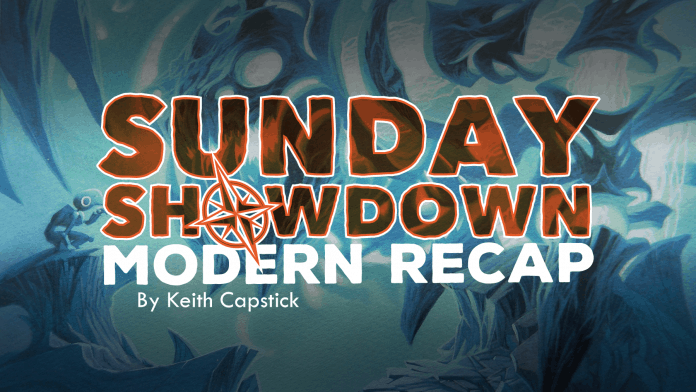 Welcome to another weekly Showdown Recap, where we take a look at what happened at Face to Face Games Toronto’s weekly Sunday Showdown, a series of 1k events feeding into the Ultimate Showdown 5k Invitational. This week players battled in Modern, and let me tell you, it was an aggressive Top 8.

If there’s one thing that you can count on in Modern it’s that every once and a while everyone will sleep on Affinity — and it will crush a tournament. Sunday was that tournament.

Our Top 8 on Sunday was filled with aggro decks. There were three copies of Affinity, two copies of Humans and a copy of B/R Hollow One. The last two decks were a copy of Amulet and a copy of Ad Nauseum, two linear combo decks.

Turns out, if you don’t bring your Ancient Grudges and removal spells in this format, you’re going to get punished.

As of late Humans has been the deck to beat in the format and that was the story here as well. Affinity has recently become a way to thwart the Humans menace and I think that’s why we saw the Top 8 that showed up on Sunday.

Recent GP champion Edgar Magalhaes has made his impact on the greater Toronto area and I can only assume that his galaxy brain was all over this Amulet decklist from Adrian Lau in Top 8.

As for the Ad Nauseum deck, well it was Chris Flink. The guy just doesn’t miss Modern Showdown Top 8s with that deck.

Another shout out goes to Quinn Graham, who’s been a staple at our Showdown series and cracked his first Top 8 on Sunday.

Modern is always going to be the kind of format where decks can have “their weekend.” Some times the fair decks like Jeskai and Jund will come out and pray on the likes of Humans and Affinity. Other times, Affinity is going to run right through the Trons of the world. This time, the little artifacts won. With his win on Sunday Erik cements his spot in the Face to Face Games Ultimate Showdown. Congratulations Erik!