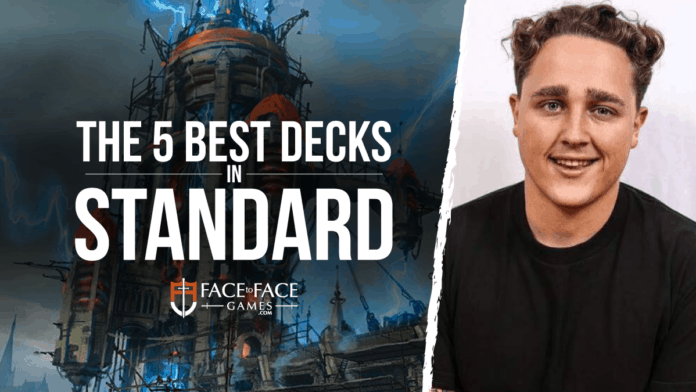 As someone whose favourite thing about Magic is building decks, there’s nothing quite like a brand new Standard format.

War of the Spark has just released in paper and the ensuing mad-dash to acquire Standard cards that will come with it has begun. Now, you need to know what to play. There are so many new goodies, 36 new planeswalkers, where do you even start? Well, I’ve scoured the corners of the internet, looking for the absolute best of the best decks to make sure that you spend your money wisely (at Face to Face Games of course) and win your upcoming Standard tournaments.

This Standard format is shaping up to be quite the puzzle. The new set has added some midrange muscle to a format that was previously stretched to its poles and there are a ton of viable options. Below are the five decks I’ve distilled from the masses and think will give you the best shot to have success:

Here we’re kicking off with what we know — and of course it’s that Teferi, Hero of Dominaria is still absolutely bonkers in Standard. Esper Control didn’t get that many additions with War of the Spark but its existing powerful shell is still well positioned, and it got some nice little upgrades.

Obviously Dovin’s Veto slots in nicely in the place of Negate, there’s not much to discuss past the fact that this might just be the best Negate ever printed. The real addition from the new set for Esper is Teferi, Time Raveler. You don’t have to be a genius to understand that three mana planeswalkers are always good on-rate and this card has some powerful abilities to boot. Its passive is a house in against other control decks and may be the single most powerful effect in your deck against the format’s Nexus of Fate decks. Nexus has traditionally been a tough matchup for Esper, so this maindeck-able card that helps to thwart that matchup only helped Esper’s already favourable matchup spread. Don’t forget you can minus Teferi with no targets to simply draw a card on an empty board.

William “Huey” Jensen is to thank for the general framework of the new version of this deck, and above I’ve shared the version I’ve been playing on the MTG Arena ladder. This Esper Hero archetype was largely shelved after the beginning of last Standard season but I believe it has legs with some new additions. Jensen seems to also think so and piloted it to the finals of the Fandom Legends tournament that took place this past week.

This deck benefits from the addition of Teferi, Time Raveler even more so then then its control counterpart. The Hero version gains just as much versus Nexus decks, adds a nice hay maker for the control decks and can also capitalize on the inherent tempo advantage that such a cheap threat offers. Hero of Precinct One into Teferi is just a hard draw for any deck to beat.

Enter the God-Eternals also slots in nicely here and in a lot of cases does a nice budget-Glorybringer impression. A card like this is most back-breaking when your deck is able to establish a board presence and then drop this as a hammer and get a big attack in. With Thief of Sanity and Hero in your maindeck, this version of Esper can give you those kinds of draws.

White aggro decks were good before, and let me tell you they’re still just as good. Above is a list that streamer AnnaMae used to make the Top 4 of the same Fandom Legends event in which she splashed black for some disruption and staying power.

Sorin, Vengeful Bloodlord is a card that was not on very many writer’s radars heading into the format but has really shined in the first few days of Arena play in my opinion. For me, the key here is its loyalty. The card is just very hard to remove from play through combat and allows you to grind a little better against all of the various control and midrange decks that have gotten more popular with the new set.

Gideon Blackblade is yet another sticky threat that helps to improve the sometimes-all-in game one gameplan this deck has. Gideon is the kind of threat that really dominates post-board games for these beat down decks and allows them to properly play around the various wrath-effects out of Esper.

Much to the dismay of many, this deck may have gotten the most from War of the Spark.

If this format ends up being a control and midrange slog-fest this deck is absolutely primed for some big performances early on in the format’s shelf-life. Blast Zone is bonkers in this deck due to the obvious synergy with Wilderness Reclamation allowing you to operate at instant speed. It also improves a few of your absolute worst matchups in Mono-Blue and Mono-Red Aggro. That said, if those decks occupy a large portion of the metagame you probably don’t want to be hauling off to tournaments with your Nexus of Fates.

That said, the most impactful card for this deck is absolutely Tamiyo, Collector of Tales. This card allows you to rifle through your deck to find Reclamation and Nexus and also lets you really skimp on your win condition due to its ability to recur cards from your graveyard.

The reality with combo-style decks in Standard is that they often need bread and butter cards like this to enable their powerful engines, and if Nexus is broken in this format it’s going to because of the staying power of Tamiyo.

Here’s a spicy one from a Face to Face Games Toronto local Felix Sloo. The thing about these Gruul Monsters shells traditionally is that they only ever seem to be good when they rely on sticky threats like Planeswalkers to dampen their vulnerability to wraths. Luckily, we just got some new toys in the form of Domri, Anarch of Bolas and Sarkhan the Masterless.

5-0 the first league with Gruul Walkers 🏆 really happy with the list. Maindeck Cindervines and Domri put in a lot of work. Would probably cut 1 Chandra, 1 Sarkhan for the 3rd and 4th Rekindling Phoenix. 2 Karn’s Bastion are bad, should be 1 Forest, 1 Blast Zone. @arenadecklists pic.twitter.com/iDCaww2lLj

I have a hunch that this deck might just have what it takes to vault itself into the upper echelon of Standard given its rare combination of speed and ability to grind. If this deck can beat Esper with consistency then I think it is in a good spot in the metagame.

That said, I think you might want to at least try to fit a play-set of Llanowar Elves into the deck in order to ramp out that sweet turn-two Domri. Felix thinks it might be too hard to pair the Elf with Rekindling Phoenix but it’s definitely worth trying before dismissing.

Alright, now you’ve got all you need. Decks, strategy and all the info on the biggest winners from War of the Spark. I’m going to keep messing around with this Esper Hero deck, but hit me up on Twitter if you have any major breakthroughs in Standard over the next few weeks. Particulary if your brew includes the card Liliana, Dreadhorde General!