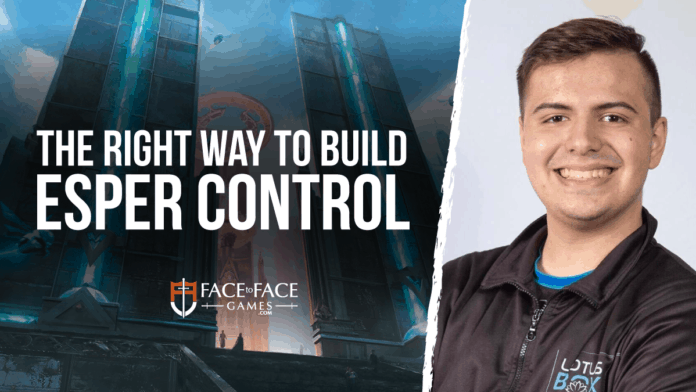 I’m here to tell you that Esper Control is the best deck in Standard.

A couple weeks back at the StarCityGames Open in Richmond I managed to 11-4 the Open with Esper, good enough for Top 16. Going forward, Esper can adjust to beat anything and it’s for that reason I think it is, and will remain to be on top of the metagame.

During the previous Standard format, I wasn’t high on Esper Control. I honestly just thought it wasn’t good, and it certainly wasn’t positioned well. But, War of the Spark has added some great tools for Esper, and it starts with these busted three mana planeswalkers: Narset, Parter of Veils and Teferi, Time Raveler. Last format your game plan against the Simic Nexus deck was atrocious and the format was incredibly hostile towards Esper (Nexus, White Aggro, Gruul Aggro). Then, your few good matchups became a lot worse when everybody had a plan post-board for Thief of Sanity and Hostage Taker.

Teferi and Narset have given the deck an actual plan versus the deck people were claiming was broken for Week 1 Standard — Simic Nexus, while also being a useful tool against the rest of the format. Both walkers have incredible static effects that render the instant speed Nexus game plan obsolete. Teferi, Hero of Dominaria is once again on top.

Narset, Parter of Veils: I was incredibly high on this card going into the weekend and let me tell you that Narset did NOT disappoint. In testing, I often referred to her in jest as Dig Through Time and although that may be a little hyperbolic, the similarities are hard to ignore in practice. The only issue with the card is that you don’t always have the luxury of slamming it on an empty board like you do with Teferi. That said, in testing I’ve found that even an Impulse that gains you three life is good enough a lot of the time. And the upside in slower matchups is just so powerful.

Narset’s static ability is best in the Esper Control mirror and against Simic Nexus where it just completely bricks opposing Chemister’s Insights and Teferis. Sultai and Bant decks will probably continue to rise in popularity and as these decks get more and more popular, you’ll notice that their primary catch up mechanic in Hydroid Krasis is just absolutely COLDED by Narset.

Teferi, Time Raveler: Teferi, Time Raveler did not make the cut in my maindeck this weekend but that doesn’t mean that this planeswalker doesn’t do stupid-powerful things. Teferi was a three-of in my sideboard and was an absolute nightmare for all my Esper Control and Simic Nexus opponents to deal with. Turns out, forcing your opponent to jam at sorcery speed is pretty powerful. Teferi lines up very well with your game plan of “answer everything to safely deploy Teferi, Hero of Dominaria” and it is just absolutely backbreaking in the blue matchups. 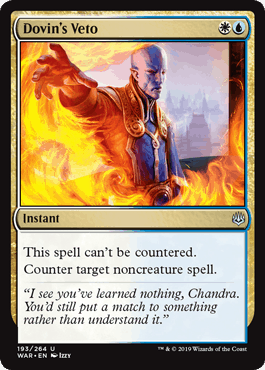 Dovin’s Veto: This is the biggest upgrade this archetype got — Negate with upside. It doesn’t look flashy, but it most certainly has changed how games are played both with and against Esper Control. The threat of Dovin’s Veto basically makes it impossible for decks to be able to just resolve their problematic non-creature threat against open mana. They can’t just add blue to their deck and force through their spells like Sultai used to. We now have a “say no” button, and that’s always something control decks are in the market for.

Now I know what you all want me to talk about, and I think I saved the most interesting point about my deck list from the Open for last, and that is my decision to play ZERO Thief of Sanity. I’ve always had a love and hate relationship with Thief and the reason it’s now cuttable is due to the printing of both Narset and Teferi. These two are the new card advantage engine you need post-board and I think it’s time to move past the 2/2 flier for more stable threats.

In testing, I found that Narset and Teferi did most of the heavy lifting in the blue matchups and that getting Thief going post-board was a high variance plan. With these new sticky cheap walkers, we no longer have to rely on the snowbally-yet-vulnerable three mana flyer.

With Richmond behind me and the Standard Open in Syracuse just days away, where does Esper Control go from here? There are several changes that I want to address from the list that I played this past weekend:

Liliana, Dreadhorde General: Sadly Liliana, Dreadhorde General was the biggest SLOP of my Top 16 weekend. Liliana is a very powerful threat and it has been compared to Elspeth, Sun’s Champion even in the eyes of strong players like my friends Oliver Tomajko and Kazu Negri. But, the sad truth of the matter is that the format is currently in a spot where there are effectively no Sultai, Bant, or Gruul creature decks where she shines. In their place, stand a field full of decks that make it impossible to tap-out for her.

Vona, Butcher of Magan: I’ve registered this card in the past in Esper Control and been happy with it. But, it’s something that I just shelved completely after the printing of Hallowed Fountain allowed the deck to reliably cast Lyra Dawnbringer. Vona in current Esper is an inspiration from Edgar Magalhães and I believe it was a great inclusion in Week 1 of the format. The prevalence of Teferi, Time Raveler currently makes me very skeptical of playing Vona against Esper or Bant Midrange so I think that I will be moving to Lyra Dawnbringer to have the best threat against Mono-Red and White Weenie.

Dreadhorde Invasion: This is my new post-board win condition that I’ve loved in testing this week. This card is inspired by Arne Huscenbeth and Oliver Tomajko who were both off the Thief of Sanity plan in Richmond in favour of this two-mana enchantment. It’s important to note just how lean this card is. It gets under a lot of the interaction (Cast Down, Oath of Kaya, Kraul Harpooner, Arboreal Grazer) that people leave in out of respect for Thief in the Esper Control mirror and against Simic Nexus which I love. It’s more or less a brick against green decks, but if the midrange matchups remain flavours of Esper, this card is nice.

With all the changes that I just mentioned, here is what my current Esper Control list looks like right now:

I sideboard a lot differently in this matchup than other Esper Control players. Basically, I often find Kaya’s Wrath to be a trap and I just want to try and make my post-board configuration as lean as possible. I think Wrath is a lot worse in this matchup then both Cry of the Carnarium and Lyra Dawnbringer is a nice upgrade from the Vona I registered in Richmond.

Be careful with the ratio of card draw to discard spells you leave in your deck. Having six discard and zero Chemister’s is a really easy way to run out of gas.

Sideboarding in this matchup can be quite tricky if you don’t know your opponents 75. Team Lotus Box brought a Simic Nexus list to SCG Richmond that sideboarded several copies of Carnage Tyrant which is why leave in one copy of Kaya’s Wrath as a hedge. Dreadhorde Invasion is a hard hitter in this matchup along with Narset, Parter of Veils and the third copy of Teferi, Time Raveler.

With the addition of Oath of Kaya, we can cut Cast Down in this matchup comfortably while respecting Thief of Sanity and the three mana walkers. This is the second matchup where Dreadhorde Invasion is the nuts. Mortify is an odd cut but I have been respecting Thief, Teferi and Narset more than I’m respecting the one or two copies of Search for Azcanta. 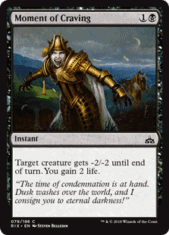 In this matchup you want to cut all your Thought Erasures, Absorbs and Dovin’s Vetos and just turn into a tap-out control deck that leverages the power of your sideboard. The sideboard for this matchup conveniently is quite nice and you have a ton of bombs that are quite hard for White Weenie to beat. Teferi, Time Raveler is the most interesting card in this matchup, and I found that it is quite nice to just blink a History of Benalia token while also just shutting off their relevant interaction post-board. Hostage Taker and Lyra Dawnbringer are both game winners in this matchup. 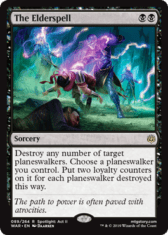 Once again I’m trying to become a tap-out deck as much as possible with just the three Dovin’s Veto because Teferi shuts off your counter magic so well. The Elderspell is quite nice in this matchup as their deck is comprised of 7-11 planeswalkers and it can just be an absolute blowout that climbs you back into the game. 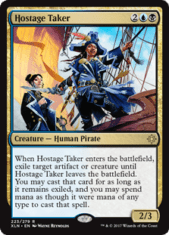 Pretty similar sideboarding to how it was last format in the classic fight of Esper Control versus Sultai Midrange. Sultai and Bant Midrange are the two matchups where you miss Thief of Sanity the most, but I do think that Hostage Taker mitigates the loss well. Oath of Kaya isn’t the flashiest card to leave in, but it can be used to finish off a low Vivien Reid while also just padding your life total if they have an aggressive Merfolk Branchwalker into Jadelight Ranger draws. It is important to note that Narset, Parter of Veils is quite good in this matchup as it shuts off their best grinding mechanism, Hydroid Krasis. 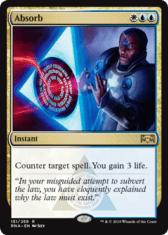 I know that cutting Absorb in this matchup makes us weaker to God-Eternal Oketra. That said, Absorb is a huge liability against their Teferi, Time Raveler, Vivien, Champion of Justice draws. The difference between this matchup and Sultai is that our own small Teferis just completely blank their flash game and I’ve found that Esper Control is much better at operating on the tap-out axis than they are.

Esper Control is the best deck in current Standard. Teferi, Hero of Dominaria just is an incredibly powerful Magic card and the supporting cast around Teferi is also quite stellar. If you’ve got a Standard tournament this weekend there is not doubt in my mind that this is what you should be playing!