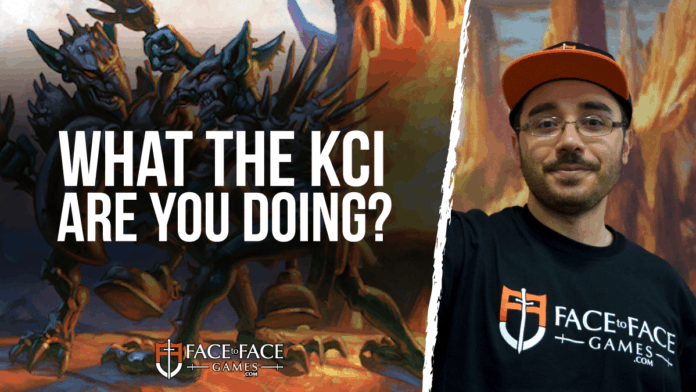 It’s funny to think that an uncommon from Mirrodin block that wasn’t worth picking up tenth pick in draft is now a $15 card. Now it’s the engine for possibly the best deck in Modern — Krark-Clan Ironworks Combo. Scrap Trawler brought it to life, and now it’s creating havoc at Modern tournaments everywhere.

KCI can rarely win on turn two, reliably wins on turn three without being disrupted and turn four is pretty consistent. This is pretty uncommon for a deck full of cards that are meant to cycle for cheap. It’s just so redundant. Matt Nass has piloted the deck to much success, crushing a few Grand Prix’s. I myself have a GP Top 8 with it at the last GP Vegas… while vending the GP (work work work work).

Before I tell you what I think people are doing wrong with the deck let’s talk about it’s evolution. It started out primarily as a Gruul mana-base that would shoot out an Emrakul, the Aeons Torn using KCI. My fellow Face to Face Games teammate Shaheen Soorani tells me he’s the first one to come up with the Myr Retriever angle that added infinite loops to the deck as your primary win condition. At PT25 we saw a few pros turn the deck into Temur utilizing Sai, Master Thopterist in post-board games to battle disruption.

Funny enough, I also played KCI at that Pro Tour and I also arrived on Temur. I was splashing The Antiquities War instead of Sai. I lost round one to a close mirror match and then didn’t lose another match for the rest of the event. I would have rightfully lost my match to fellow teammate Gabriel Nassif I believe, but the other two matches decided our fate before it could go to the end.

This is me saying the deck is powerful and not that I am right in my build and the others are wrong. Clearly there was a Top 4 list that had Sai and even I have adapted my build to include him. But with this in mind, there is room to iterate and just like Sai worked for them, my testing landed me with a great record.

Before I get into my deckbuilding, I’d like to take you through a lot of the cards people seem to be playing that I DO NOT think belong in the deck.

In deckbuilding, I try to recall the cards I am sideboarding out most often to determine where I should consider adding things. This strategy can sometimes be effective at determining where your weakest links are. Trimming Mind Stone happens so frequently I determined it had to be right to cut one copy from the deck. I have been playing three for awhile and have not looked back. The second copy of Myr Retriever was frequently boarded-out and does not need to even be in the 75 because you really only need the card to assemble your combo, it doesn’t do much to get you there.

It’s easy to imagine a loop where you keep your Scrap Trawler in play and loop Retriever into retriever over and over, but I’m looking for the best version and not the easiest version. You can do the same trick with any artifact that costs more than two mana and my list even runs an Ensnaring Bridge in the maindeck for you to assemble that loop with! Another thing I’ve done that throws people off is my inclusion of a single Defense Grid in the maindeck. The one card swap has influenced many of my poor control matchups to be solid matchups instead. While comboing, it also cycle’s itself into an egg so as to not be completely useless to draw.

Now if you’re a KCI player I’m sure my list is going to turn your head. A Defense Grid and an Ensnaring Bridge in the main deck! Well yes, and they have specific purposes. This idea was given to me by my teammate Edgar Magalhaes. Ensnaring Bridge can serve to lock out both Spirits and Humans, of course, but also vastly improves your Death’s Shadow matchup. Death’s Shadow may be this deck’s worst matchup so the inclusion is well worth it, especially over the redundant Myr Retriever. There’s just a lot of access in having a bullet like this against these disruptive creature decks, especially with all the tutor-like effects that KCI has to offer.

As for the Defense Grid, we used to have to wait until we had eight mana available to try and resolve two KCI’s in one turn, in hopes that blue control decks wouldn’t be prepared to have double counters at the ready. This inclusion turns that game plan into a much smaller six mana, which happens soon enough that it’s actually a reliable and viable strategy. I have tutored this card up innumerable times with Inventor’s Fairs and has won me the game on the spot. It even serves to disrupt people who are trying to beat you with instant-speed answers like Ancient Grudge. You can play it in the same turn as you plan on going for the win and they are pretty helpless in the face of it. With all the cards you board in against any Azorious strategy, I feel it’s pretty important to utilize an artifact to answer their hate. With so many virtual copies in your deck, I think it’s an auto-include.

The rest of my maindeck is fairly self-explanatory and mundane, the manabase is constructed a little more to support the flexibility of wanting three colors available to you as frequently as possible. As for the sideboard, I am currently playing an Abrade. I haven’t had it in long enough to determine if I like it or not, but I know I’ve wanted another answer to a Spell Queller but also didn’t want to draw too many bolts and not be adaptable. It is nice that it can also snag a Damping Sphere or have an impact in the mirror as well.

Back to Nature is also a recent addition, most notably good against Bogles. Bogles game one is a great matchup. Post-board however it is abysmal, surprisingly. They bring in almost their entire sideboard of Gaddock Teeg’s, Rest in Peace and Stony Silences. It’s important that we have a little extra game in that matchup. It’s kind of nice that Ensnaring Bridge is a powerful spell versus them as well in my version, so we have some extra game. Back to Nature also comes in versus Azorious control strategies and some white-based decks that are known to have a plethora of enchantment-based hate cards in their sideboard.

The Antiquities War is an important piece for combating excessive discard spells or even winning through Stony Silence and other hate cards. It’s great versus any control and all of the Golgari Midrange decks.

Sai comes in almost every matchup and I often have to talk myself out of playing it in the maindeck. For now I’ve left it in the board but I could see a world where you’d play one main and be happy with it.

The only other oddball is Nihil Spellbomb. Strangely dredge has become popular, powerful, and fast thanks to the addition of Creeping Chill. Spellbomb buys you enough time to overcome the enormous amount of hate their sideboard contains for us, but also has usefulness in other matchups. Against decks leaning too hard on Snapcaster Mage, Spellbomb fits nicely into the one-drop egg slot post-board. Additionally, if your opponent’s strategy is to Thoughtseize plus Surgical you, this turn one egg disrupts that plan nicely. You can just leave it on the table and have your opponent play around it endlessly.

Now that we’ve discussed the reasons for all the strange cards in the deck, I’ll give you sideboarding notes for the most popular decks in the format. Do keep in mind you’ll have to be flexible when you’re on the play or draw and use the knowledge you glean from the card choices your opponents make to determine how to adjust.

The Strategy here is to kill the hate bears preventing you from comboing off. However I win most of these games by using Engineered Explosives to gain immense card advantage that a singular Scrap Trawler goes the distance without even needing KCI.

This feels like our second worst matchup behind Death’s Shadow (which thankfully does not see much play anymore). They have Stony Silence, Rest in Peace, Spell Queller and a fast clock. You may be surprised that I’m boarding out combo pieces, but if you do not find a way to slow them down or stabilize your combo will not work and you’ll just have more dead cards clogging you up. It may not seem intuitive to cut an Engineered Explosives, but Spirits unlike Humans has a lot more mana-cost-diversity and killing their cheap spells is not as effective and very slow.

Because you are bringing in two eggs in Spellbomb, we can afford to trim a few eggs. Leyline of the Void is the most popular hate card out of Dredge that we should expect to see. That usually determines if I am cutting a Chromatic Sphere or a Terrarion. Never cut any Chromatic Stars in my opinion.

This matchup is so good I wasn’t sure if 90 per cent was high enough to claim. Just make sure you know what to do against graveyard hate with plenty of practice. Also, if you play a Scrap Trawler or a Myr Retriever into an active Oblivion Stone, you can usually win through it being popped off. Note that you may want to bring in a couple Lightning Bolts on the draw if you’re concerned your opponent will have a quick Karn Liberated — they always minus it on a mana-source right away putting it to three loyalty and they do not always have a decent follow-up for at least a couple turns.

The asterisks are for the situations in which you determine they lean too heavy on their graveyards or are playing a lot of enchantments (I.E. Detention Sphere, Search for Azcanta, Rest in Peace and Stony Silence). The strategy here is to sacrifice your speed for consistency, have answers for their hate and utilize card advantage to slowly gain enough edge to put them away.

As always readers, thanks for tuning in. I hope you found this educational and you do not use it to beat me at any upcoming tournaments . Keep coming back to the best store around at FacetoFaceGames.com and support some of the best store owners in the business.

See you on the circuit!