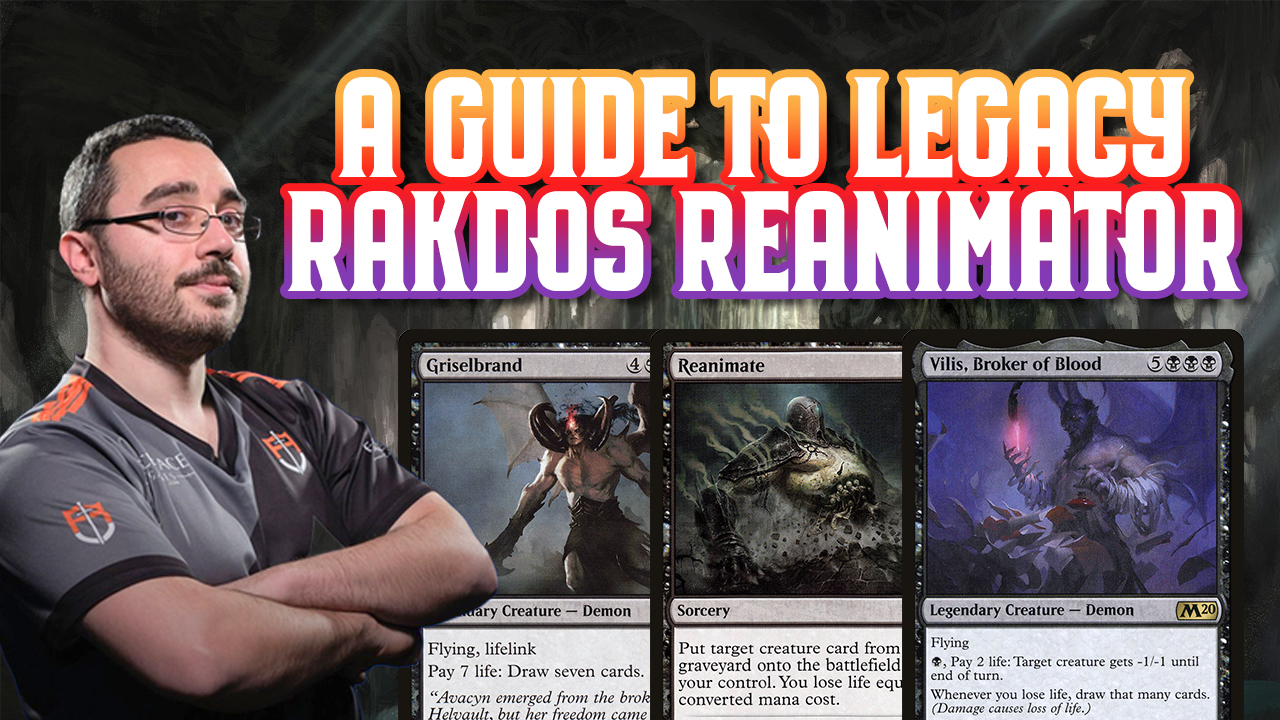 Just in case you tuned in for Modern, this is a Legacy format article! That doesn’t mean you should run away, you should be stoked to learn about one of Magic’s greatest formats! On the heels of Demonic Tutors winning multiple Legacy challenges on Magic Online with Storm the format seems to be rethinking its metagame just a smidge. Delver holding the top spot made everything go wonky with decks having three maindeck copies of Pyroblast for instance.

As decks narrow in on their intended meta, fringe decks like Rakdos Reanimator get better because graveyard hate tends to be narrow and people aren’t built to fight it. I think now is the time for this deck to truly shine. It’s also well-positioned to dismantle Storm strategies.

I’ve seen a lot of people build the deck in many different and bad ways. I’m going to share my list and talk about my spice now for a bit.


Okay for starters let’s explain what the deck is trying to accomplish. Turn 1 Swamp + Dark Ritual + Entomb for Griselbrand + Reanimation Spell – but it doesn’t stop there. Draw 14 cards for 14 life, play a Lotus Petal, cast another Dark Ritual, Unmask them, Entomb for Children of Korlis, Reanimate it, go back up to 20 life, draw 14 more cards, ritual and Tendrils of Agony them for the win!

That’s a nice ideal turn 1 kill and unlike many other decks this deck actually can do it pretty consistently. There are a lot of other openings that any good pilot will want to learn of course. That example was a game on easy mode. It gets even more insane when you do it on the play with a Chancellor of the Annex in hand to prevent a Force of Will.

A choice of contention that is going to be up to the pilot is that I prefer to choose to draw first with this deck. My reasoning is that Reanimator is faster than most decks in the format anyway and the additional card helps. You can choose to draw for the turn and then just move to end step immediately to discard Griselbrand. You also get information on turn one on how the opponent is going to act and what disruption they might have at the ready. I’ve stood by my methodology on this, but I know many will think I am crazy for it.

If you’re thinking about toying with the numbers of different cards in this deck…don’t. Let me tell you a little about each flex spot. Unmask is the best discard option for the following reason: you want to have the discard spell cost nothing to be able to better go off. Unlike Grief, Unmask can target yourself. The illusion some are under is that you can reanimate a Grief and be in a good spot – I disagree with this line of thinking. A 3/2 Menace is nothing to write home about and chipping away will not win you games with this deck.

The 4th Chancellor of the Annex always surprised me. You want to draw one copy. Drawing two copies sort of cancels the second copy out when they throw away a dead spell. It’s a decent reanimation target in some matchups like Storm. One Copy of Vilis, Broker of Blood should amuse some. There will be scenarios where you have Reanimate and you’re up against a fast deck like Delver. If you bring back Griselbrand, you’ll be sub seven life and can’t draw. If you attack, you’ll fly into an 8/8 Murktide Regent. Vilis lets you Reanimate and draw a new hand to start doing bigger things. This also gives you another workaround to Surgical Extraction taking out your Griselbrands.

The two copies of Archon of Cruelty are also solid Griselbrand replacements. They give us just enough copies of big heavy spells for our draw + discard turn one strategy to be consistent. Also Archon can pull the game out of tough spots if our opponent tries the old Show and Tell and put an Emrakul into play strategy. After those flex spots there isn’t room to mess with the rest of the deck.

Now game ones are simple enough so let’s talk post board. People are packing Surgical Extraction, Leyline of the Void, Endurance, and Bojuka Bog. Soul-Guide Lantern and Grafdigger’s Cage have mostly disappeared. This part is tricky because it requires people to have good insight into what others will bring in post-board. We can bring in answers to the hate or we can try to go around it with Stronghold Gambit. There’s actually a third option where we just try to fight through it all.

There are a couple tricks you can learn to play around the hate cards. Exhume is my favorite one because they can use Endurance and then after Endurance resolves you can Entomb a great threat into play. If they play Leyline of the Void and they are a Show and Tell deck there are fun lines where we can Thoughtseize their Griselbrand and then Animate Dead or Reanimate their creature. Last thing to mention is some opponents will Sylvan Library down to 8 life or so. There are lines where you will just naturally Tendrils of Agony them out.

Let’s talk about our sideboard cards now. Massacre is our answer to deal with Thalia, Meddling Mage, Lion Slash, and Containment Priest shenanigans. Faerie Macabre is for the mirror and potentially even Lands. Magus of the Moon is specifically for Lands, but it is also situationally good versus decks like Turbo Depths. Wear//Tear is mostly for Leyline of the Void, but it also really shines versus decks that play Urza’s Saga. Prismatic Ending is the nice versatile answer we need to decks playing singleton copies of Grafdigger’s Cage. Lastly, Coffin Purge is an excellent Entomb target for similar mirror decks.

Next, it’s important to know the in and out swaps for sideboarding. If you are bringing in four copies of Stronghold Gambit, then you want all of your Thoughtseize and Unmask spells. In matchups where Chancellor of the Annex isn’t a good reanimate target, this card will frequently come out. If you know your opponent isn’t playing Force of Will and you have a game three to hedge on, you can always bring Chancellor back in to ensure they can’t Endurance or Surgical and then keep only lightning fast hands on the play.

Faithless Looting and Stronghold Gambit are naturally opposing cards because they get rid of the creatures in your hand where you want to have them to put into play. This is again a judgment call based on what you feel your opponents will do. I tend not to recommend this strategy against Delver because they’re already light on hate and often have creatures they can hold onto. Against Endurance-based decks I’m also hesitant to enact this plan. Stronghold Gambit is usually a good card in exactly one game. Once it’s a known quantity I like boarding them out to catch the opponent playing around a card you no longer have.

Prismatic Ending is your answer in various matchups to not die to your opponent’s threats. I tend to keep around 10 reanimate spells and trim the two that I think are weakest in any matchup. Tendrils of Agony and Children of Korlis can get cut against decks like Delver because they fold to a big creature and that’s just the easiest place to make cuts. If you need to win faster as you are going off though, be sure and keep these two cards in.

If you can get paired against Lands and Storm every round of an event, you will win every round. So really just do that and don’t worry about studying the deck or this article (in too much detail at least). There’s not much more to say about Rakdos Reanimator. The deck is very strong and not incredibly hard to pilot, but be sure to know what your opponent’s might have to counter your plan! Learn the common lines of the deck so you don’t end up punting a winnable game. Best of luck and as always thanks for reading!