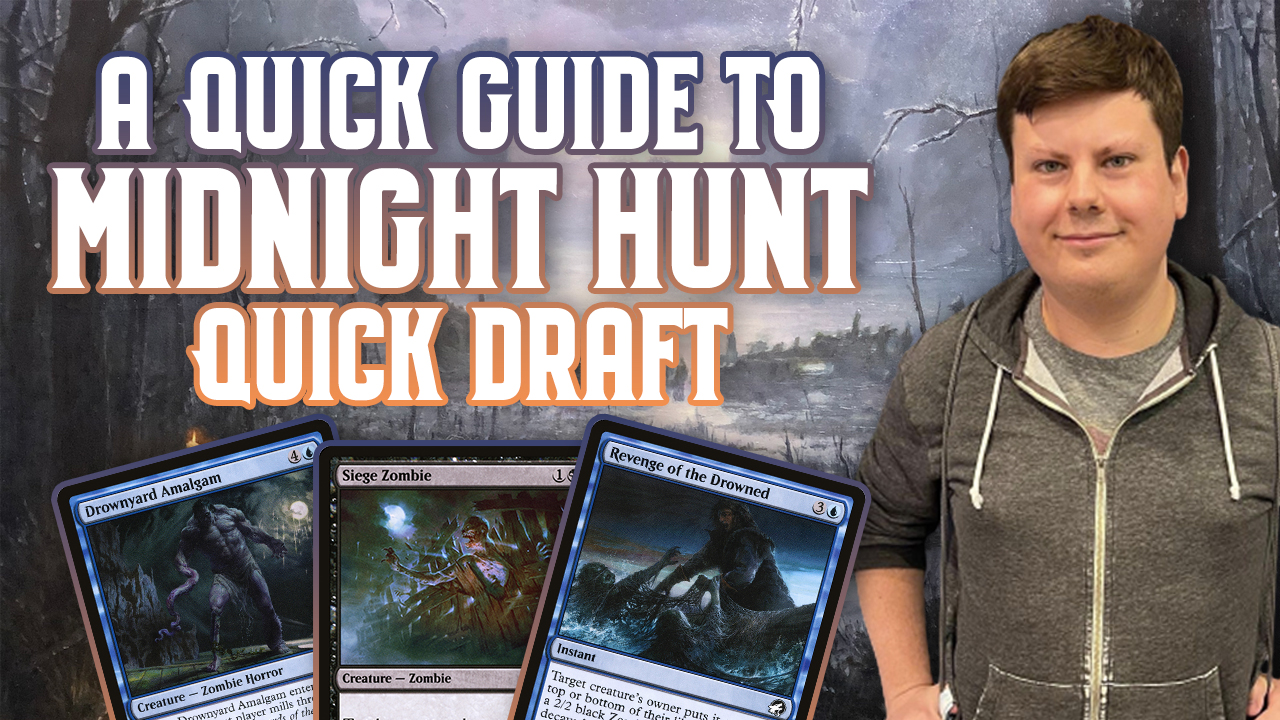 One of my favorite ways to take advantage of MTG Arena Limited events is to play Quick Drafts. Quick Drafts are great ways to rank up quickly, especially when you have a solid understanding of the format you’re playing. You can usually game the AI system to see the cards you want. While this doesn’t work for every single draft, you can find yourself in the more powerful color pairs a vast majority of the time.

With players caught between grinding for Qualifier Play-In points and the various constructed ladders, the Limited ladder is a great place to take advantage of less-experienced players. While you’ll run into good players from time to time, it’s usually easier to hit Mythic and maintain a top rating than in constructed.

Midnight Hunt is the current Quick Draft format on MTG Arena, and it’s one of the easier formats to draft in my opinion. While I could go into detail on what I think the top three or four Limited decks in the format are, it’s probably more useful for me to talk about the top performer: Dimir Zombies.

Why is Dimir Zombies so good you may ask? Dimir makes use of some of the best commons and uncommons at face value, the best removal, and best mechanic in the set, Decay. Dimir Zombies has multiple cards that are good on rate, but have the upside of making a 2/2 Decayed token that can be used in various ways.

You basically want to amass a board that can threaten your opponent with a good attack, making it so they can’t attack you in turn. Larder Zombie can use your Decayed tokens to pull ahead on card advantage, making it so you most likely won’t draw a land as your draw for turn. Siege Zombie and Skaab Wrangler can pressure your opponent, whittling their life total and stifling their attacks respectively.

Let’s take a look at a quick visual breakdown of what cards you should (and shouldn’t) be prioritizing:

By far my favorite card to draft in this archetype is Morbid Opportunist. With so much Decayed tokens being made by both you and possibly your opponent, this card is the perfect draw engine that can pull you far ahead of your opponent.

One of my favorite interactions in this format is Revenge of the Drowned with Drownyard Amalgam. You can Revenge your opponent’s bomb to the top of their deck on their turn and untap and mill it with Amalgam. I’m usually in favor of milling your opponent with Amalgam, even in a format with flashback and disturb creatures. The reason being that it’s easy for you to mill out yourself with so much card draw and potential self-mill. Since you’ll probably be playing the mirror a good amount of the time milling your opponent is a very real way to win the game.

When picking cards during the draft I usually prioritize cards that make use of Decayed tokens pretty highly: Larder Zombie, Siege Zombie, and Skaab Wrangler. Eaten Alive is another top pick that acts as a very cheap terminate. I usually like to have one Drownyard Amalgam, Stormrider Spirit, or Morkrut Behemoth at my top end as an evasive finisher, but I usually prioritize Diregraf Horde over these cards.

Bat Whisperer, while more of a Rakdos Vampires card, is very strong in this deck as it provides two bodies for your “tap three creatures” cards. Falcon Abomination is also one of my higher-picked commons for the same reason.

This is my most recent 7-0 deck in the format. This is definitely one of the stronger decks, even though I’m still playing some filler cards like Rotten Reunion and Stormrider Spirit. The real power in this deck comes in making multiple bodies across one card, which fuel cards like Larder Zombie and Siege Zombie. Amassing a large army of zombies also make your attacks better with Bladestitched Skaab in play.

Overall Dimir Zombies is the hallmark deck of the Midnight Hunt Limited format. With powerful interaction, common cards that can win the game on their own, evasive threats, and inevitability, this deck is too good to pass up drafting in Midnight Hunt Quick Draft. While there is more to be said about the intricacies of what order you should be picking these cards in, following this quick guide will help you go positive with no question. Just make sure you don’t run into the mirror too often.

I’ll be back next time with some insights on how to quick draft Innistrad: Crimson Vow!