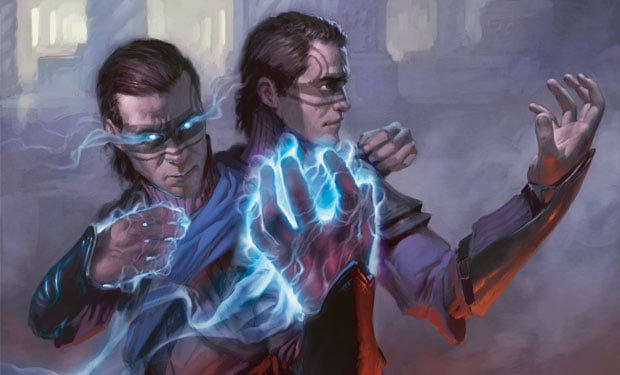 It took a few weeks, but Dragon’s Maze cards have finally caught on in Magic the Gathering Standard. The Block Constructed format of the Pro Tour in San Diego really helped to showcase the new cards and promote their use in Standard. This week, I want to highlight two particular cards and their impact on Standard.

[card]Voice of Resurgence[/card] is probably the hottest card in Standard right now. It seems that Aaron Barich’s SCG Open-winning Naya Aggro list from a few weeks ago is here to stay:

This deck trades off the tribal synergy of Blitz decks and the mana consistency of RG Aggro decks to play all of the most efficient threats together. This deck harkens back to Zoo decks of the past-I have fond memories of casting [card]Savannah Lions[/card], [card]Kird Ape[/card], and [card]Watchwolf[/card] in the Craig Jones Zoo deck of the original Ravnica Block.

[card]Voice of Resurgence[/card] does a lot of different things for the deck. It’s yet another durable threat, teaming up with [card]Experiment One[/card] and [card]Strangleroot Geist[/card] to make [card]Supreme Verdict[/card] look almost embarrassing. It hoses cards like [card]Azorius Charm[/card], counterspells, and creatures with flash. And it can also play defense pretty well against the faster, red aggressive decks.

I don’t think that this type of Zoo deck is necessarily better than a [card]Burning-Tree Emissary[/card] deck, but it does seem advantaged in any sort of aggressive mirror match. Variations of Naya decks featuring [card]Domri Rade[/card] and a higher curve of creatures, such as Willy Edel’s second-place list from Grand Prix Guadalajara, have a lot of merit to them as well. If I were inclined to play an aggro deck, this would be my weapon of choice for the near future.

Brad Nelson certainly has a knack for trailblazing his own way through Standard, winning the Standard Open in Baltimore with a WBG version of The Aristocrats. [card]Varolz, the Scar-Striped[/card], fits right in with the grindy type of games that The Aristocrats can play and also provides another sacrifice outlet in lieu of [card]Falkenrath Aristocrat[/card]. [card]Voice of Resurgence[/card] makes another appearance for all of the same reasons I’ve already listed and serves as another great enabler of [card]Skirsdag High Priest[/card] and [card]Blood Artist[/card]. Voice is really being used to its full potential here, whereas I can see aggro decks opting to go with other cards like Call of the Conclave; Thalia, Guardian of Thraben; Mayor of Avabruck; or [card]Flinthoof Boar[/card].

It’s absent from Brad’s list, but [card]Maw of the Obzedat[/card] can enable an immediate kill with [card]Lingering Souls[/card] and a bunch of cheap creatures, as well as being another sacrifice outlet. A five-mana spell is about as expensive as you want to go, but it might be worthwhile as a one-of or two-of in the deck.

Should Aristocrats players be trading in their [card]Boros Reckoner[/card]s and [card]Blasphemous Act[/card]s for Voices and Young Wolves? It might be worth a try, but what I like about [card]Blasphemous Act[/card] is that it simply threatens to win games at any moment and can pull you back from being behind. [card]Mark of Mutiny[/card] is another strong reason to be red, so I don’t know that I would switch to Junk ‘Crats immediately.

[card]Aetherling[/card] might have been the most dominant card of Pro Tour Dragon’s Maze, and it seems likely that it’ll be the win condition of choice for control decks post-rotation.

Cuneo is a control deck expert, so I look to him for the type of deck that would run [card]Aetherling[/card] as a finisher. UWR always seems to linger around in popularity, but is never quite a tier-one deck. Even with new tools like [card]Warleader’s Helix[/card] and [card]Turn // Burn[/card], Standard is just way too diverse for this deck to handle. Aggro matchups should be favorable, in theory, but RG Aggro and Blitz decks can still present some unbeatable draws. Again, [card]Supreme Verdict[/card] is lackluster against things like The Aristocrats, [card]Voice of Resurgence[/card], and [card]Boros Charm[/card], but the Terminuses in the sideboard help there. [card]Aetherling[/card] is the unkillable win condition that this deck needed, so maybe UWR will get a spark of new life?

This [card]Aetherling[/card] deck gets bonus points for originality. Here, we have a definite tap-out style control deck, with zero counterspells and a large suite of planeswalkers. [card]Mutilate[/card] has been a criminally underplayed card during its time in Standard, and, while it’s only slightly better than [card]Supreme Verdict[/card] when you can meet the [card]Swamp[/card] condition, it gets around things like regeneration and indestructibility.

An SCG Open top eight proves that this deck is somewhat reasonable; there could be something to this list. Like the UWR deck, it gained two new awesome removal spells from Dragon’s Maze and a virtually unkillable win condition in [card]Aetherling[/card]. If I chose to pick up this deck, I would consider cutting some of the cute cards ([card]Progenitor Mimic[/card], [card]Notion Thief[/card], [card]Sepulchral Primordial[/card]) and adding in some [card]Evil Twin[/card]s, [card]Vraska the Unseen[/card], and a couple of counterspells to punish people who think they know your list.

Bottom line: buy your [card]Aetherling[/card]s now. It’s already too late for [card]Voice of Resurgence[/card] and its $45+ price tag. These two will be important cards in Standard for quite some time.

Thanks for reading! I’ve been away from writing for a while, but will be back at full strength this month. Call it a resurgence, if you will.

Alex Bianchi
Gemmanite on MTGO and Twitter
Stream at twitch.tv/gemmanite