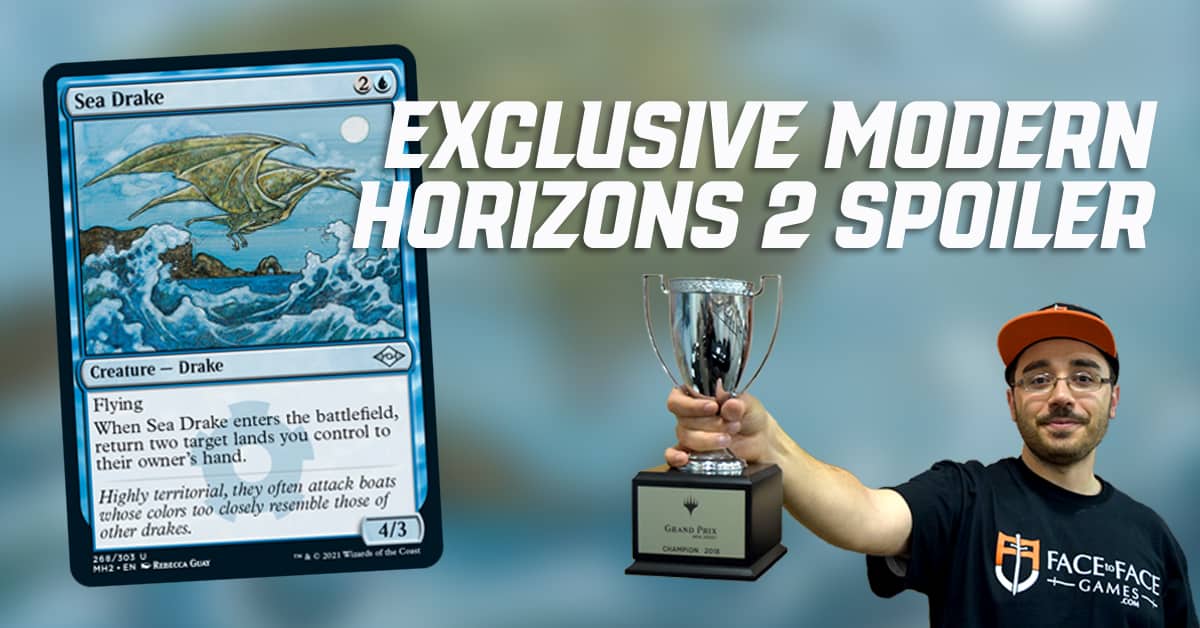 It’s pretty sweet to get to introduce a card that used to be a Legacy staple believe it or not. Now reintroduced into the Modern format. Sea Drake used to be utilized with Ancient Tomb and City of Traitors in a blue stompy type of deck that would try to put out fast, heavy threats and then disrupt you into oblivion. Seen here:

The card has been designated as an uncommon to boot. So while we may not see it in Pauper, it’s sure to be a solid pickup in Limited. If this card is to make an even bigger splash on the Modern stage it will have to involve fast mana and lands with come into play abilities. If Wizards of the Coast decides to print cards like these (they’ve definitely removed a lot of the restraints with the cards they’ve shown thus far), then there could be some sweet interactions on the horizon.

As far as the secondary market is concerned. Sea Drake is likely to drop even more in value. While it used to attain costs of around $20 a pop, it has dropped down to a few dollars as its play and desirability has declined (probably due to an impressive power creep in subsequent years). I would foresee the price dropping even further now into the less than $1.00 column. Now if they print some more ridiculous cards like what I mentioned above, then we could see a price resurgence similar to what Street Wraith did with Death’s Shadow. That is a very optimistic take/outlook however and I certainly wouldn’t want to bank on it.

Sea Drake carries a lot of nostalgia for me. Lots of this card has been slung around back in the day and it certainly brings many players back to happier times when things maybe felt simpler. The tremendous amount of mechanics and rules changes alone are enough to keep many retired players from even thinking about dipping their feet back in the pool. Still Wizards reprinting cool/fun cards like Sea Drake is a good tiding to come in my mind. I know this spoiler season has been even more exciting than many past sets and there’s still so many more goodies to come.

With cards like Lightning Bolt being so prevalent in Modern, I unfortunately think Sea Drake is not likely to fit in well into the format as a beatdown creature. It’ll have to be the card’s setback function of returning two lands to hand that actually makes it playable. Like I was suggesting before it’s possible to turn that function into an advantage with just the right cards being printed.

I could also potentially see more abilities similar to the ones on Barrin, Tolarian Archmage, where you get an advantage for returning a permanent to your hand from the battlefield. I highly doubt just having Barrin, Tolarian Archmage and Sea Drake is enough. So we would have to see other cards with varied mana costs and abilities working together to really get this engine pumping. Personally I would love to see a new angle of attack from magic and the inevitable change it would bring with it to the game. Many of us are here for the complexity so why stop now?