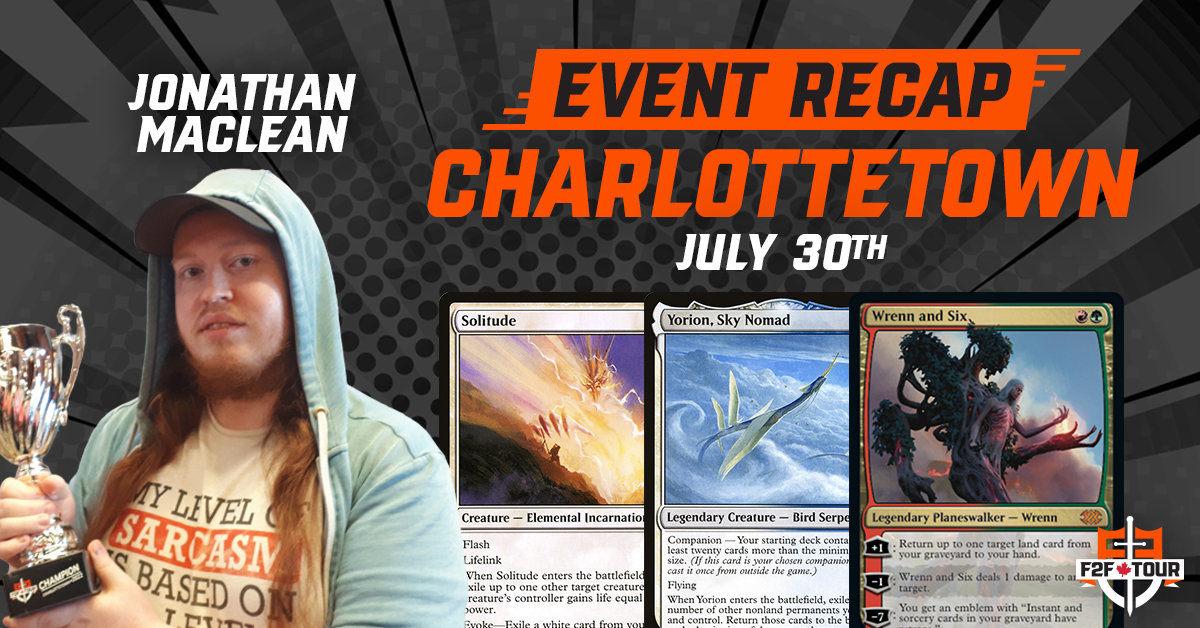 This past weekend, we were excited to be hosting an F2F Tour Stop in the capital city of Prince Edward Island. Tons of players came out to Charlottetown to sling some cardboard!

43 players battled in our Modern Open with Jonathan MacLean taking it down with 4c Elementals.

Felix Sloo finished with a familiar-looking deck in 2nd place.

I asked him how he felt about the deck and it sounded like it has been very close to perfection for him:

“I’ve been playing Murktide a lot on MTGO lately. I’m happy with 59 slots in the maindeck, but strangely everything I’ve tried in the 60th slot – Dragon’s Rage Channeler, Dress Down, Unlicensed Hearse, Spell Snare, the third Archmage’s Charm, the third Spell Pierce, even more bizarre choices like Remand and Fiery Cannonade – feels underwhelming.

For this tournament I played a Subtlety in that slot because it allowed me to fit in an extra sideboard card, and of the sideboard cards I was playing, Subtlety felt like the best fit for the maindeck because it’s very good in certain matchups like Burn and 4c but can also be relevant in some games in other matchups.”

Dan Snider finished 1st after the Swiss portion but unfortunately lose to the eventual winner in the quarterfinals. He sounded very satisfied with his deck:

“Hammer, as a combo deck, has the ability to provide free wins out of nowhere, which is incredibly valuable in large, open tournaments. I felt the deck also has a positive match-up against most others in the meta, except for 4C Yorion piles, but hoped to dodge them due to limited card availability. All-in-all, the deck felt fantastic all day, beating UR Murktide, the mirror, and even 4C Yorion which lead to me finishing 5-1 in the swiss. My run ended when I eventually lost a close game 3 against 4C Yorion Elementals in the quarter-finals.“

It was nice to see Sean Rutledge in the top 8 as he has had multiple F2F Open top 8s in his career. He played something that I haven’t really seen much since we restarted the F2F Tour in 2022.

I had to ask him what it was all about. He told me:

“Been brewing with a hybrid Heliod combo deck for a while now where I felt the Devoted Druid deck and Heliod combo decks were too linear / easy to hate but shared a lot in common so I blended them together into this abomination.

The deck has a hard time with counter heavy matchups like Control and Murktide (the former being largely non-existent these days) hence the inclusion of the old school Boseiju, who Shelters All, though I dodged any match up where it was useful so yet to find out how worthy of the sideboard slot it is.

Murktide being an unfavorable but winnable match up aside, I feel like the deck is even to slightly favored against Rhino’s / 4C Omnath and Living End is a great match up making it fairly safe against a lot of the top decks. And the nature of the deck having infinite life combo gives a lot of free wins against the rest of the super wide format. Online the deck is brutal to pilot but in-person I think the deck still has legs despite people believing it dead post-Modern Horizons 2.“

Lance being Sean’s friend was kind enough to give some insight behind his top 8 finish with Mono-Green Tron:

“A disclaimer, I’m fairly new to post-MH2 Modern, therefore my opinions are purely anecdotal due to my limited experience of the format.

I chose Mono Green Tron as the deck to play due to the generosity of my friend Sean lending me his deck, and my partial affinity to playing a pseudo-combo/ramp deck like Tron. There seems to be an overall downtick in meta decks having dedicated Tron hate within their 75, making it slightly better positioned than if Tron was more popular; though my ability to naturally to draw the missing Tron piece doesn’t hurt either.

There have been established Mono Green Tron lists for a good while now, so I’ll explain the particular card choices I’ve made that deviate from the stock lists and highlighting the cards that are key in the current meta.

As much as my very irrational dislike of the Chromatic Sphere when compared to the Star, my very rational dislike of Ragavan prompted me to make room for 2 copies of Walking Ballista into the main, with an additional in the sideboard for Karn the Great Creator. Ballista has been good to great against creature heavy matchups (which is basically most of the current meta decks), a clean answer to turn 1 Ragavan on the play and a versatile threat post board vs Blood Moon/Magus of the Moon, that can both activate/tutored by Sanctum of Ugin.

The same logic applies for 2 of Thragtusks main. In a world of Solitudes, Thragtusk and his beasty friend shines in comparison to the lonesome Wurmcoil Engine, that’s why I’ve made the swap for more Thragtusks and less Wurmcoils; it is often the best play when opponents disrupt the assemblage of Tron.

A single copy of Emrakul, the Promised End is phenomenal against 4c, it is made easier to cast as well since Warping Wail and Walking Ballista are cheap ways to add additional card types into the graveyard.
Of note, there are certain artifacts that I’ve decided not to include in the sideboard for KGC. Namely Pithing Needle, Torpor Orb and Trinisphere. In my experience these are very timing dependent and their usefulness decline dramatically when the optimal window to deploy them has passed. I didn’t feel they’re as necessary as Tormod’s Crypt vs Living End, Engineered Explosives vs Rhinos and Chalice of the Void vs both.

Overall, I’m happy to keep playing Mono Green Tron moving forward in the current meta. KGC continues to add more flexibility and dimensions to the deck’s, albeit very linear game plan. Regardless of the texture of the Modern format, a turn 3 Karn can still Liberate an opponent out of the game.”

That’s it for this one as the F2F Tour heads to my hometown in Montreal this weekend! Check out the event page for full details!