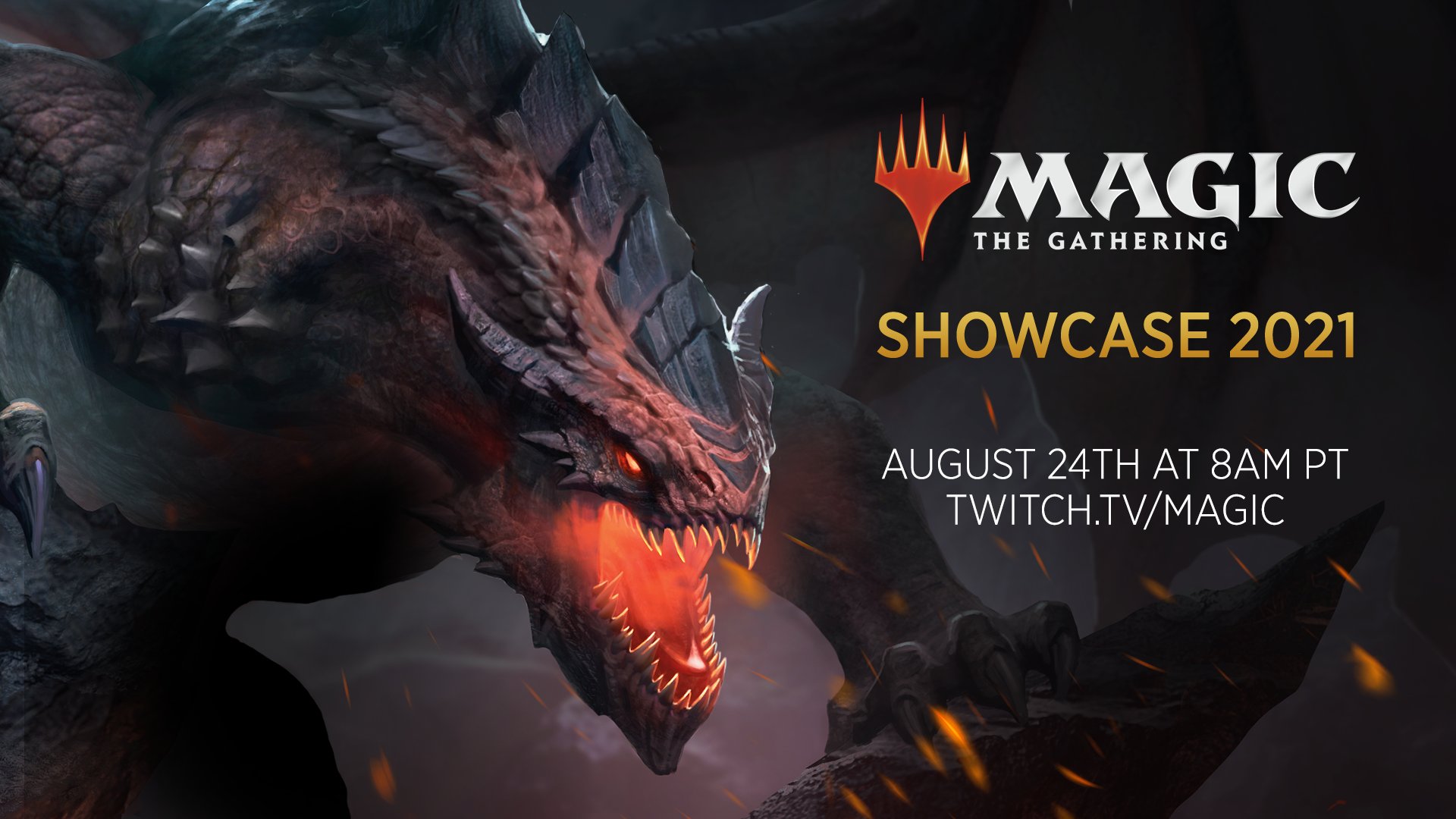 The 2021 Magic Showcase was certainly a whirlwind of announcements. If you didn’t wake up at 8am to watch it like I did, here’s a brief summary of what’s coming to Magic over the next year:

That’s…a lot of stuff. A lot. Nevertheless, let’s break down some of the important announcements.

The next four Standard-legal sets after the Innistrad sets are: Kamigawa: Neon Dynasty, Streets of New Capenna, Dominaria United, and The Brothers’ War. Kamigawa will be a cyberpunk-themed set taking place 2,000 years after the original Kamigawa block. Streets of New Capenna is a brand new plane, a city built by angels now taken over by tri-colored demon ‘mafia’ families. The plane also has importance to Elspeth. Dominaria United is a return to Dominaria (not too many exciting details there). Finally, The Brothers’ War will be a look at the war between Urza and Mishra, which sparked the events of the Magic multiverse.

I didn’t play during the original Kamigawa block so I’m excited to see what they do with Neon Dynasty. Cyberpunk will be a new type of Magic world like we’ve never seen before, so I’m interested in how the world will be built and how it will relate to the original Kamigawa Block. As a lover of crime movies in general, Streets of New Capenna sounds super exciting. I think a noir-Magic set is an idea that’s been worth exploring, and as a lover of mafia films in general I’m interested to see how the set plays out.

One important piece of information that was later announced on Twitter via Aaron Forsythe was the changes coming to Standard rotation:

I’m not exactly sure what sets will be rotating out in the summer, but I can at least guess that Zendikar Rising, Kaldheim, and Strixhaven will be out. That leaves us with both Innistrad sets, Kamigawa, Streets of New Capenna, and Dominaria United. It’s unclear why this change was made but my guess is that rotation will now take place in summer rather than fall, perhaps to shake Standard up in the middle of the year.

Aside from Standard releases we were met with a bevy of other products. While I don’t want to cover every single supplementary product that was announced, the big releases of note were:

4. Unfinity, the next Un-set

Now…that’s a lot of products. It’s hard to not get overwhelmed by every release that’s coming out in paper and digital, as well as the various other products. However, one thing I like to keep in mind when met with product overload is to remember that not every single Magic product is for me. Do I think the constant bombardment of products is fine? No. I’m not a fan of WotC constantly releasing a new product seemingly every other week that players need to buy. I’m not a fan of supplemental products that affect competitive formats in particular, such as Modern Masters (but more into that later). However, what I will say is that I’m glad Magic is a game that’s loved by so many diverse people, and it’s fitting that the game should have a diverse product set. Commander Legends: Baldur’s Gate is probably not the product for a Modern player, and Double Masters is probably not the best set for a new kitchen-table player.

Moving on, Innistrad: Double Feature is a product I’m super excited about. It’s a mash-up draftable set of both upcoming Innistrad releases, that provides alternate art for some of the cards in a retro, horror-film art-style. I think it’s a slam dunk product for a few reasons. It caters to both collectors trying to get a dynamic art style while also catering to Limited fans who will get to draft the format using a specialized booster pack. Overall, it’s a nice homage to the black and white horror films that greatly influenced the horror genre. This is a home run product that makes me miss drafting two and three set blocks.

Since I’m not the biggest casual player, I’m not going to delve too deeply into some of the casual products, like the Baldur’s Gate Commander set or Unfinity, but I do want to talk about Universes Beyond. In the showcase, WotC announced a few different Secret Lair crossovers, with IPs such as Fortnite and Street Fighter. I’m not opposed to Secret Lairs offering alternate art for pre-existing cards. I dislike adding cards straight into eternal formats however of characters from different IPs. I think it makes Magic lose some of its charm and worldbuilding that’s been going on since the early 90s. It doesn’t make sense for me to have these cards affect formats that enfranchised players are dedicated to. I do think they’re great ways to bring in players from other gaming communities, so I don’t mind silver-bordered or other IP versions of pre-existing cards. Introducing Universes Beyond cards into eternal formats is a bad idea waiting to happen…and that’s where I’d like to talk about, you guessed it, the Lord of the Rings: Tales of Middle Earth set.

Look, I’m as big of a LotR fan as the next guy (don’t ask me how many times I’ve seen the extended editions), which is why I’m extremely torn on this type of product. On the one hand, I think a full Lord of the Rings supplemental set that can be drafted is incredible. Lord of the Rings is so massive it deserves a full set detailing all of the characters and settings of such an important fantasy masterpiece. As a big fan of Limited, I’d much rather have a full robust set that I can draft and experience over and over again than just a Secret Lair or Commander product. I’m super excited to play Limited with this product upon its release.

Here’s why this kind of release bothers me. The LotR set will be Modern and Legacy legal, and I assume Historic legal as well. While Lord of the Rings is a high-fantasy series that has directly influenced Magic in many ways, at the end of the day, it’s not a plane in the Multiverse. There are no planeswalkers, no five colors of mana in the world of Lord of the Rings. In my opinion, it shouldn’t be a part of the regular Magic expansions that affect enfranchised players. Rather, it should stay separate, as most of the other IPs have done so in Magic thus far. It’s frustrating to me that Magic could turn into a game like Super Smash Bros., where it’s constantly crossing over with other IPs and it loses its own original story and world-building. I play Magic for Magic, not because it’s a different game or property.

My other issue with this set being Modern, Legacy, and Historic legal is that it puts pressure on enfranchised eternal format players to purchase a new product. Who knows how available the LotR set will be, and I’m sure it will be popular with a variety of players. It’s frustrating that a product that seemingly looks designed for a more casual environment can have a major impact on formats like Modern, where competitive decks are way over $1,000. I don’t like Modern turning into a format where you have to purchase a product every year or two years to stay relevant, since that already exists in Standard (although in recent times Standard has become more of an Arena-focused format). While sets like Modern Horizons certainly shake up the format, they’re a bit worrisome in my opinion because they provide a one-set printing for cards that end up being top format staples.

You want a playset of Ragavans? That’ll be over $300. Oh you need some Murktide Regents to go along with them? That’ll be another $80. Playset of Urza’s Sagas? Another $80. See what I mean? Look, I understand Magic is an expensive hobby, it’s not for everyone. At the same time, however, I’m not a fan of how often cards are printed directly into eternal formats that end up being format staples. How many 5-0 Modern League decks or top performing Challenge decks don’t have cards from a Horizons set in them?

I hate to rant, and I definitely don’t want to come off as complaining. However, I think it’s a bit predatory to have a product that directly affects eternal formats while also being a hit with other demographics. I’m worried about the next Ragavan accidentally being in the LotR set. Players don’t need to purchase Ragavans, but it’s a disservice to your community of enfranchised players to pressure them to buy new cards often if they want to stay caught up in the format. I’m really hopeful we don’t get a Ragavan situation and that the LotR product is a slam-dunk Limited environment. I just can’t help but worry about the issues that could potentially arise by printing this set directly into Modern.

But overall, I’m really hopeful for this set and can’t wait to draft it with my LotR-loving friends for years to come. And who knows, maybe this set won’t have a ton of influential cards on the Modern format, but it will shake things up in an exciting way. We never know what the future holds.

Finally, on a brighter note, there was one small announcement that I’d like to stay hopeful about:

While I wish there was a formal announcement in the showcase about OP, it’s at least nice to have some sort of communication from WotC about the state of OP. It’s a totally fair decision from WotC to not have competitive tabletop play figured out with the current state of the pandemic. With COVID cases up in my city, as well as other major cities across the country, I’m not looking to step into a convention center hall of unmasked Magic players just yet. I can wait and you can too. I still hope we get more opportunities in the near-future to qualify for pro-level events.

One other great announcement during the showcase was the integration of Draft into the Arena Opens. I’ve played a ton of Limited this past year, mostly on Arena, and am finally happy I get to play Draft in a competitive environment. It’s been a bit since my last Limited Grand Prix Day 2, and I’m definitely excited to play a whole event with just Drat as opposed to Sealed. While the Arena Opens are great and I’ve had some success in them, it doesn’t fully scratch the itch I have for jamming Magic at a high level. Fingers crossed we get an update soon on the future of competitive play.

At the end of the day, Magic is a fantastic game loved by so many amazing people, and I’m excited for the various products that will be released over the course of the next year. From new Standard planes to Commander products, there’s something for everyone. As an enfranchised, competitive player, I’m hopeful there will be more announcements coming soon related to Organized Play, but in the meantime I’m glad more casual players get to experience a bevy of interesting and unique products. I myself am super excited for Arena Draft Opens, Streets of New Capenna, and Innistrad: Double Feature.

What product are you most looking forward to in the coming year? Let me know!