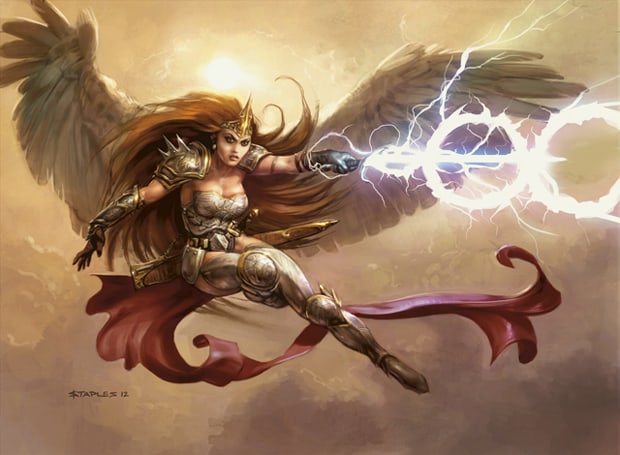 A week of independence celebrations started with Canada Day, and continues here in the States with our own Independance Day. As an American, this makes it the perfect time to talk about my current deck of choice, featuring the good ol’ colors of Red, White, and Blue, and the freedom to cast your spells during whatever damn phase of the game you want (but probably just End Step). ‘MERICA.

The list that I started out with didn’t quite look like this. Two weeks ago, on the morning before heading to Jupiter Games for a PTQ, I decided to play the deck cold. As you are probably already aware of, the classic last-minute audible almost never works out. The Red, White, and Blue flag didn’t fly as majestically as I thought it would.

Some things that I quickly learned after seven painful rounds:

– [card]Turn // Burn[/card] was way worse in practice than I thought it would be. This was deceiving to me because a lot of the best creatures in Standard have abilities that make them hard to deal with ([card]Thragtusk[/card], [card]Boros Reckoner[/card], [card]Voice of Resurgence[/card], [card]Angel of Serenity[/card]). Making these creatures lose all abilities with Turn seemed ideal, but I found myself not having enough time and/or mana to use the card effectively. At any moment, I basically would have rather [card]Turn // Burn[/card] have been [card]Searing Spear[/card], [card]Essence Scatter[/card], or [card]Renounce the Guilds[/card].

– [card]Rewind[/card] is also an expensive counterspell, and isn’t always able to give you tempo advantage to make it worthwhile.

– I was really in need of an early creature to play proactively in slower matchups. Playing a [card]Restoration Angel[/card] for no value, only to have it get Putrefy’d or Warleader’s Helixed or Supreme Verdicted, doesn’t get you anywhere.

– [card]Thundermaw Hellkite[/card] is still the king of the skies. I cast Dragons in all four Standard PTQs that I played in this season, in three completely different decks, and they were strong everytime.

– [card]Moorland Haunt[/card] did amazing work, even without the help of things like [card]Runechanter’s Pike[/card] or [card]Intangible Virtue[/card]. Single points of damage really matter in this deck. [card]Moorland Haunt[/card] turns your dead creatures into extra value by creating attackers at instant speed, an effect that fits slightly better with our gameplan than those of other utility lands like [card]Desolate Lighthouse[/card] and [card]Slayers’ Stronghold[/card].

With these changes in mind, and drawing most of my card choices directly from Jacob Van Lunen’s latest U/W/R Flash deck, I made major improvements. I liked a lot of the things that set JVL’s list apart from those advocated by Matt Costa and Gerry Thompson, such as maindeck [card]Thundermaw Hellkite[/card], zero maindeck [card]Supreme Verdict[/card]s, and no [card]Turn // Burn[/card]. Of course, the great thing about this type of deck is that it’s highly customizable. Costa has his own thoughts on how a U/W/R deck should look, which he backed up with a GP Miami Top 8. Gerry is an expert on the archetype in his own right, and his list looks different again. The fact that there isn’t a consensus list for Flash is actually a good thing, since an opponent might play around cards that aren’t even in your deck, or fail to consider cards that are.

At the aforementioned PTQ, I was only able to muster two match wins in seven rounds. But I bounced back this past weekend, winning a Mox at Game Corps’ Season Championship in Erie, Pennsylvania and winning a Grand Prix [card]Trial[/card].

The most important addition was [card]Augur of Bolas[/card], and it just seems obvious to me now that you want to be playing four of this card. It was the proactive body that I was missing. The defining strategy of [card]Flash[/card] decks is to transition quickly between being the control deck and being the beatdown deck, and Augur works well in both of these roles. A decent three off the top can even give you some card selection, which allows you to play to the matchup and the current state of the game.

Gerry Thompson has been advocating the use of [card]Essence Scatter[/card], and I’m a believer now, too. It’s so much better to have your spell always cost two mana; I hope I never have to play [card]Syncopate[/card] again.

[card]Warleader’s Helix[/card] is the real four-mana spell that allows us to stabilize against Red aggressive decks. Good players won’t overcommit into a [card]Supreme Verdict[/card] if they don’t have to. Plus, [card]Supreme Verdict[/card] doesn’t make as much sense in our more creature-heavy build of U/W/R. Helix also finishes games pretty darn fast. When you have [card]Snapcaster Mage[/card] and [card]Pillar of Flame[/card] to go with it, burn becomes an actual plan against other Blue decks.

I know it’s a seemingly dumb point to make, but practice is important, especially with a deck like U/W/R Flash. Don’t go into a tournament cold. There are a ton of small decisions to be made every match, and they add up severely. I had to learn (mostly the hard way) to assess my role at each stage in the game, and identify the important cards in each matchup.

I feel good about U/W/R’s position in Standard until rotation, and I would run the above list within two to three sideboard slots for any major events that I had coming up. Next week, I’ll start looking at M14 cards that have sparked my interest, and potential decks for the upcoming Standard!

Alex Bianchi
Gemmanite on Twitter and MTGO
Stream at twitch.tv/gemmanite