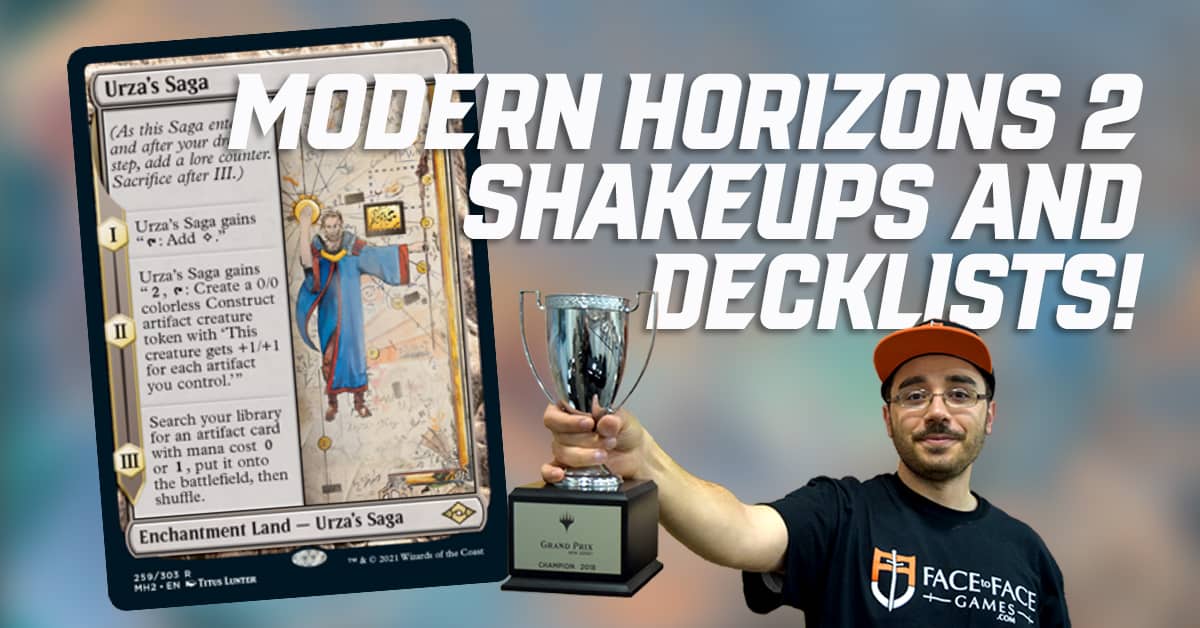 I’m sure I am not informing anyone of anything new when I say Modern Horizons 2 is a crazy, bonkers, power-packed set. It’s always a sure sign when the Twitter mob starts wanting things banned before they’ve even gotten to be played in live play. I’m probably mostly referring to Urza’s Saga, but let’s take a look at some of the other cards that are also being used to craft some sweet new brews.

It can fetch Amulet of Vigor on stage 3, continually be bounced with Simic Growth Chamber and the like, and even have instant speed tricks with the help of Sakura-Tribe Scout. This deck is going to give every archetype major fits if they don’t plan well for it.

Now for my personal favorite, the brew with the card that cannot be pronounced!

This is a crowded board state player’s dream. Taking elements of Madness, Food, and graveyard synergies and actually making them flow together in harmony. This deck also wants to abuse Urza’s Saga as most decks are trying to do. However it utilizes a few more new cards in The Underworld Cookbook and Asmoranomardicadaistinaculdacar.

The fact that this deck has brought Feasting Troll King onto the Modern map is just super cool. This deck probably utilizes more Modern Horizons 2 cards than any other current brew which is probably why I am most intrigued by it. It’s always fun when a new approach is established in a format. It widens the array of what\s expected and makes for more exciting game play.

Some of the new cards printed only serve to enhance older cards that were already seeing marginal play. I’m primarily thinking of Ephemerate on this one. Brews that are trying to utilize new come into play abilities to enhance the big impact this spell has for one mana. Like seen here:

Many players initially were trying to pair Ephemerate with Grief. This would allow for a disgusting turn 1 play of Thoughtseizing your opponent three times and being left with a 3/2 creature. Now we see players slowly moving away from the ideal and more towards the consistent. Whereas you may not get those turn 1 plays, those plays become much weaker later.

However Solitude is the same color as Ephemerate, so there’s already less deck building constraints. It works better as the game goes longer, so your plan isn’t rushed and instead slowly becomes more in line. Having a shell that’s less multi-colored also allows you to have the alternate cost of Solitude more consistently. With Grief we had to jam a bunch of black cards just to try and remain consistent. Cards like Primatic Ending and Teferi are already great inclusions.

Now if you simply do not like change, never worry, it seems Wizards has you covered as well. This old school Bogle list didn’t play a single new card and still managed to go 3-1 in the last Modern Preliminary:

I’m sure I don’t need to say much about a deck like this that’s been established for a while. I will say however that you’re going to have more long-term success if you continue to adapt as a player. Those players that only play their one favorite deck and don’t evolve inevitably end up falling behind the times.

Remember folks, if you’re buying for collecting value, the Modern Horizons 2 set boosters are where it’s at. Use the draft boosters only if you intend to have the net maximum fun value from this set. Don’t forget to support your local game store, clean up after yourselves, and make the brightest future possible for us all!