There have been two important articles this month challenging the status-quo of concessions and intentional draws in tournament Magic. It started with Eric Froehlich’s “11th in Houston with Jeskai Black” and continued in Ross Merriam’s “You play to win the game”. These two articles brought us uncomfortably close to the surreptitious world of implied bribery and sketchy concessions.

I’m going to lay out the current rules surrounding concessions, intentional draws and prize splits, including the severe penalties associated with crossing the line. We’ll see how these penalties lead to a system where long-time enfranchised players are rewarded, but new players are taken advantage of.

Players want guidance in the dark art of splitting prizes without breaking any rules. This is not that guide. Please do not point to this article and say, “Yeah, but Mike said it was okay!”. This article is a mirror being held up to our toxic behaviors.

The rules citations will come from The MTG Tournament Rules and the Infraction and Procedure Guide.

Section 2.4 of the Tournament Rules tell us this:

“If a game or match is not completed, players may concede or mutually agree to a draw in that game or match. A match is considered complete once the result slip is filled out or, if match slips are not being used, a player leaves the table after game play is finished. Until that point, either player may concede to or draw with the other, though if the conceding player won a game in the match, the match must be reported as 2-1. Intentional draws where no games were played are always reported as 0-0-3.

Players may not agree to a concession or draw in exchange for any reward or incentive. Doing so will be considered Bribery (see section 5.2).”

The second paragraph is what causes all the confusion, although it doesn’t appear too complicated. Just don’t bribe your opponent, right? Well, it’s complicated enough that it warranted judge Peter Jahn’s 3600 word article “Bribery, Collusion and Betting” (which should be required reading for anyone considering playing competitive Magic).

The Penalty for Bribery 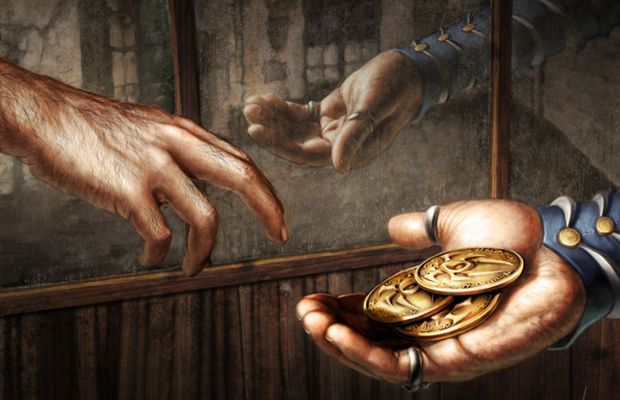 The penalty for bribery is an unequivocal disqualification from the tournament, without prizes. It is hammered home to players that if you offer something in exchange for a match result you will be disqualified, and judges enforce this strictly. Perhaps even more surprisingly, is that if a player merely receives such an offer they are obligated to report it, or face the same penalty (disqualification).

This is not an obscure rule. Judges always remind players of this rule in the last round of a tournament. In practice though, we often receive a cryptic, deadpan announcement like “Don’t bribe your opponent. That is bad. You don’t want to be disqualified, and I don’t want to do the paperwork.” We simultaneously pretend that bribery is serious and not-important.

Consider these common situations. What are the players allowed to do?

Situation 1 (equal records). Two players A and B with the same record (4-0) sit down for the last round of the tournament. The winner will get $100 and the loser will get $40. They would like to lower the shock of losing, and would prefer something like $80 for the winner, $60 for the loser.

Situation 2 (unequal prizes). Two players A and B with the same record (4-0) sit down for the last round of the tournament. The winner gets an expensive card (say, a $100 Taiga) and the loser gets $40. They would also like to lower the shock of losing. Can they propose that the winner give the loser a $30 card from their personal collection?

“The decision to drop, concede, or agree to an intentional draw cannot be made in exchange for or influenced by the offer of any reward or incentive, nor may any in-game decision be influenced in this manner. Making such an offer is prohibited. Unless the player receiving such an offer calls for a judge immediately, both players will be penalized in the same manner. […]

Players are allowed to share prizes they have not yet received in the current tournament as they wish and may agree as such before or during their match, as long as any such sharing does not occur in exchange for any game or match result or the dropping of a player from the tournament.”

Situation 2 is already kind of sketchy. This natural conversation immediately leads to a disqualification: “How about you get the Taiga, I get that Foil Remand from your binder, and I’ll concede.” This is bad because one player is offering to concede in exchange for a reward. Wording it slightly differently also leads to a disqualification: “It sucks that we can’t split the Taiga. Especially since I don’t want this Foil Remand in my binder. Would you like to concede to me”. This is bad because the player seems to imply that the winner would give the loser a Foil Remand for conceding. This implication is enough to constitute bribery.

One final example: “It sucks that we can’t split the Taiga. Would you like to concede to me?” “Sure.” “Thanks. New conversation: Would you like to take a card from my binder?”. (Yes, people really say, “New conversation:” in these formal, scripted dialogues.) This is a disqualification right? Nope, this is fine. One player conceded to another without coercion or incentive. After that the winning player gave the losing player a Foil Remand. There were no conditions tied to the concession and no hints of compensation.

Let’s look at situation 3 before we draw conclusions.

Situation 3 is the most dangerous, because in order for either player to get prizes player A must lose (or concede). Discussion is therefore predicated on this assumption. Now any attempts to discuss prize splits is considered bribery because both players know what the match result must be in order for prizes to be awarded. Something as simple as player A saying, “Sure how about a split of $10 for me, $40 for you?” is enough for a disqualification because really player A is saying, “Sure (I’ll concede to you) for a split of $10 for me, $40 for you.”

To me, this is the most dangerous of the situations since here almost any discussion of prizes results in the harshest of penalties. Even worse, if Player B is callous she might wait until Player A brings up prizes, then call a judge (and end up with the nuclear match win of a disqualification of player A).

This is where experienced players gain advantage. They have learned through experience what they are and are not allowed to say. In this case, Player B might casually say, “Player A, if you win, you don’t get prizes, but I will get prizes if I win. Would you like to concede to me?”

The Argot of Concessions Over time players have developed their own secret language around concessions. This argot empowers experienced players who know the grammar and vocabulary of this language. It siphons power from inexperienced players and makes it easier for them to be taken advantage of.

In conversations between a person who knows the argot and one who doesn’t, the speaker knows what key words and phrases to use and which to avoid. However, the layman can easily get trapped by saying something that seems innocuous.

This is unfair. Players should be rewarded for better strategic play, rules knowledge, and deck building. Not for their ability to speak sideways.

At the outset I promised that this wouldn’t be a guide to skirting the rules around bribery. However, I will give you a couple of broad rules in an effort to keep you out of trouble.

1. “When in doubt, play it out.” You always have the option to play Magic. You should feel comfortable saying “I would rather play it out.”. If your opponent pesters you about a prize split, call a judge.

2. Never use conditionals when describing a prize split. No statements of the form “If …, then… .” This will help you avoid accidentally asking for something in exchange for a match result.

Contact Me
Thanks for reading. Let me know what you think; I’d love to hear from you. Have you ever been disqualified from a tournament for your inability to use the argot? How do you propose we fix it?

Catch me at the Face to Face Games in Toronto commentating on the Sunday Showdowns, send me a message on reddit /u/mpaw975, or send me an email at mpawliuk@gmail.com