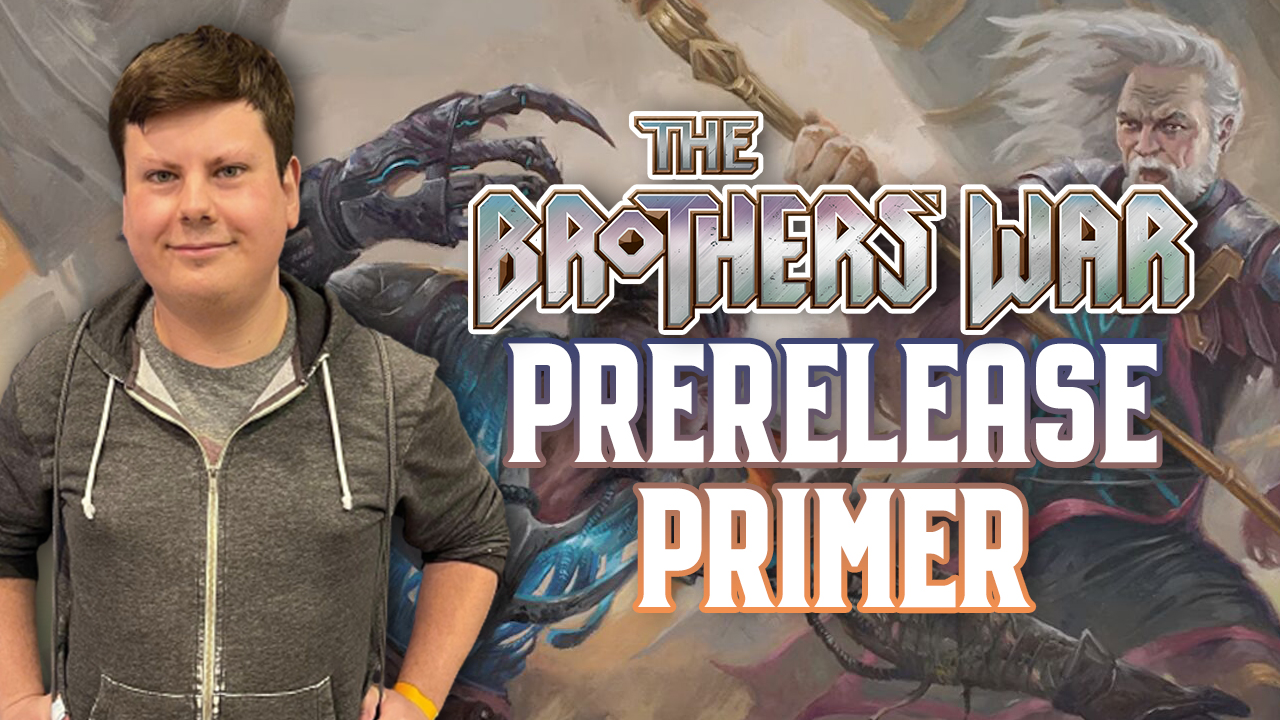 Prerelease is by far one of my favorite Magic events. I’ve always found Prerelease to be the perfect time to meet new Magic players, try out the new cards, and have a good time experimenting with deckbuilding. As a more competitive player I try and use Prerelease as a way to try out as many cards as I can. While I do want to build the best deck possible from my pools, I use this event as breathing room to experiment before I play more competitive events during the season.

The Brothers’ War is a very strange yet unique set for Limited. The last time an artifact-heavy set was a Standard release was Kaladesh. Artifact sets are tricky for me to wrap my head around. I personally thrive in lower-powered Limited formats, where it’s easy to analyze what the best two-for-one cards are. Artifact usually have very high ceilings. What I mean by this is that there’s potential to do some completely broken things. The Brothers’ War has some artifacts at the 8 and 9 mana cost slots!

In an average set, I would usually ignore cards that have such a high cost due to there not being enough ramp or feasible way to cast them. However, The Brothers’ War has a variety of unique mechanics that make it possible to do, well, the seemingly impossible. I can see a lot of games in this format coming down to the player who taps out for the best, high-cost spell. The ceiling of what you can do with cards in this set is incredibly high, and feels much higher than in any recent Standard set.

Before we dive headfirst into the cards of this set, I’ll give my usual Sealed deckbuilding spiel. In Sealed, you want to prioritize playing your best cards. You want to find the cards that are baked-in two-for-ones. These can be in the form of card draw or permanents that acrue value over multiple turns. Your deck should be comprised of your most powerful cards, removal, fixing, and ways to ensure you’ll win the long game.

In Sealed, decks are less synergistic due to the fixed card pool. It’s not uncommon to play upwards of three, four, or even five colors depending on the set. Decks in Sealed are less aggressive, and you want every creature you play to matter. In Sealed, colors like Blue are more powerful than colors such as White (on average). With that in mind, let’s take a look at some of the important things to know about The Brothers’ War Sealed!

Okay, Powerstone tokens aren’t exactly new (*cough* Karn, Living Legacy *cough*), but they’re a powerful way of ensuring you can ramp into your more expensive artifact spells. The Brothers’ War has a slew of high-powered artifact rares and mythics that either have a high casting cost, or have an activated ability that requires a big mana investment. Here are some examples:

Don’t forget that Powerstone tokens can be used to activate abilities of creatures, even though they can’t be used to cast non-artifact spells.

Prototype allows you to cast high-cost artifact creature spells for a cheaper, modified version. I think these cards will be pretty powerful in Limited, as they allow you flexibility for when to cast them. For example, Goring Warplow isn’t that exciting as a six-mana 5/4 deathtoucher. However, its Prototype ability, combined with synergies it has with other cards in the set make this common a fine include in any deck.

Since there are various cards in The Brothers’ War that return artifacts or creatures from the graveyard to your hand, you can cast this spell as a two-mana 1/1 deathtouch, hopefully trade off with a larger creature, and then buy it back later on to cast as a sizeable threat. Again, while I’m not blown away by this card I do think that there is a lot of potential for cards that can do relevant things at different parts of a given game. If you’re getting run over by an aggressive deck at least you can play this card defensively instead of having it rot in your hand as a six-mana spell. I would try and play as many prototype cards in your deck as you can.

Unearth is a returning mechanic in The Brothers’ War. Unearth allows you to re-use certain permanents in your graveyard for one more turn, usually in the form of hasty creature threats. Some of these cards have additional abilities that make it useful to Unearth them at certain points in a game.

Four mana for a 2/2 that draws a card is nothing too exciting, but similar to the discussion on Prototype cards, you can utilize this card in a variety of ways. You can bring back Scrapwork Rager with various cards that will return it from your graveyard to your hand. However, just Unearthing this for a card might be something you need to do in a long, grindy game of Sealed.

There are also cards in this set that benefit off you sacrificing creatures, such as Transmogrant Altar:

This would allow you to cash in your Unearthed Scrapwork Rager for a 3/3 token, on top of you drawing a card from the enter the battlefield trigger! Keep in mind that there are various synergies in cards in this set that can help you get max value out of your spells.

There’s honestly not a lot to say about Meld other than the fact that it would be pretty freakin’ sweet to pull it off in a Limited event! I’m sure one of you out there somewhere will be able to pull off one of these legendary combos.

One theme I’ve noticed in looking at the spoilers of this set is the amount of graveyard interaction and self-mill across a multitude of cards. The first cards that caught my eye were this cycle of self-mill common creature:

Honestly out of these five I only really am happy about playing Airlift Chaplain. Chaplain is pretty decent value as either a three mana 2/2 flyer, or a three mana 1/1 flyer that draws you a card. The stat line and mana cost of the other four in this cycle is pretty weak in my opinion. I think they’re all marginally playable, but these cards seem like they belong in dedicated draft decks compared to sealed deck. However, I’m a little more excited to play these cards if I have enough graveyard recursion, in case I need to get back a powerful spell I milled over on accident.

There are a lot of graveyard-related cards in this set. I believe The Brothers’ War is a set where you’ll value cards like Emergency Weld higher than their counterparts in previous sets. Also worth noting – if you have a lot of self-mill and you find yourself close to decking in games, it’s not the worst idea to board up to 41 or 42 cards. Lastly, I think having cards that can interact with your opponent’s graveyard to stop unearth or some of these synergistic cards is totally plausible.

Similar to sets like Theros Beyond Death, cards that say “destroy target artifact” are totally maindeckable in The Brothers’ War. There are so many powerful high-cost artifacts in Sealed and a ton of busted artifact rares, so I wouldn’t fret if you’re wondering whether to include these kinds of cards in your deck.

One quick note about mana in this format. Depending on how many colorless cards are in your deck you can be a little more flexible with your mana. I’d definitely consider running a splash color to activate abilities of some of your more powerful Prototype creatures, as long as it doesn’t come at the cost of casting your other colored spells. I’d also keep in mind that Sealed is generally a slower format than Draft, so your mana can be a little clunkier in favor of playing your more powerful cards or including mana sources to activate abilities of your rares.

Similar to the Mystical Archive of Strixhaven, The Brothers’ War will have a set of non-Standard legal cards that will appear once per draft booster, the Retro Artifacts. While not all of the 63 different reprints are exactly Limited-playable, there are some exceedingly strong cards that will make it into your deck 100% of the time (I’m looking at you, Wurmcoil Engine).

I highly recommend you become familiar with the 63 artifact cards that will be appearing in every draft booster of this set. Some of these cards can look enticing, but there are definitely a handful to ignore. Know which of these cards are auto-includes, for example, Burnished Hart:

Burnished Hart is an example of a card that’s perfect for Sealed. While a bit slow, it allows you to ramp and fix your mana at the same time, even allowing you to activate this ability at instant speed to soak up some damage. In a format where players are ramping into expensive Prototype cards, this is an auto-include for most if not all Sealed decks.

Here are a couple other must-include type cards from the Retro Artifact set:

If it fixes your mana or just seems broken, I’d think about including it in your deck. However, if you can’t really understand the ability or how it might work with your other cards, think twice before adding it to your 40.

Examples of these kinds of cards include:

If you haven’t been playing Magic for years and years don’t be afraid to ask someone familiar with these cards for their input. Having context of whether a card has performed well or not in Limited during its time will help you make better-informed deckbuilding decisions.

Also worth noting – you can get one of two different prerelease packs at the event, an Urza and Mishra-themed kit. There is actually no gameplay difference between these two kits (although there are some cosmetic differences), so don’t fret if you’re presented with this choice!

All in all, The Brothers’ War is a very unique and powerful Magic: the Gathering set. I’m excited to see how this Limited format plays out with its “battle cruiser” feel. The combination of Prototype, Unearth, and Powerstone in addition to the Retro Artifact card set make this format one of the more powerful ones in recent memory. I’m looking forward to getting my hands on my Urza kit and battling it out in the trenches this weekend.

Prerelease is the perfect opportunity to get out, meet some new friends, and most importantly, play some Magic. It’s the perfect event to try out new cards and experiment with strategies that might seem a little too cute to pull off.

As always, thanks for reading and happy prereleasing!