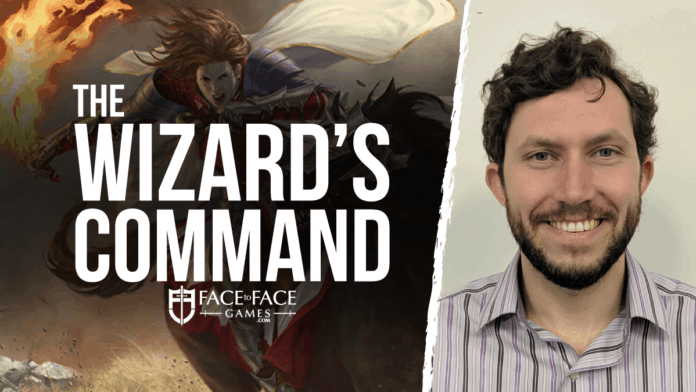 There’s no doubt that Commander has grown a ton as a format. Arguably it’s now the largest Magic has to offer.

At the most recent MagicFest Las Vegas, The Command Zone drew larger attendance than the main event (constructed Modern/Limited). Now Wizards is piloting new events called CommandFests focused solely on Commander. This increased attention to the format didn’t start recently, and it wasn’t always the best. I re-started playing in 2016 with the introduction of the Commander 2016 product. Between new cards like Breath of Fury, Cruel Entertainment and Selfless Squire along with 141 new Commander options thanks to the Partner keyword (averaging ~18 possible decks per Pre-Con), I was introduced to a format with limitless potential. The year after was followed by another unreal product in Commander 2017, introducing more great cards and another Commander-specific keyword: Eminence. As it turns out, this set unrealistic expectations for the years to come, and I’ve been disappointed with the efforts Wizards has made recently to fix some problems in Commander.

Almost two years ago from the day I’m writing this something changed. Planeswalkers gained the Legendary super-type, but that didn’t matter since Wizard’s printed a constructed set with Tribal themes (if you caught one of my recent articles, you’ll know tribal is the largest theme for Commander decks). Naturally I was excited about the possibility of new cards for my favourite format, but around this time Wizard’s clued into the fact that Commander was gaining in popularity. They leaned in too hard, and pushed what I’ll refer to as the Block Pre-Con. It wouldn’t be fully realized until the release of Rivals of Ixalan, but within the block there was a pre-constructed Commander deck.

For the first time, at least in feeling, WOtC was building Standard sets that felt directly targeted at Commander.

In Ixalan there was a cycle of Legendary Creatures, one for each tribe of Merfolk, Pirates, Vampires and Dinosaurs. The Vampires made for some nice upgrades to a deck that didn’t need any help — Vampiric Bloodlust (which also featured Teferi’s Protection). Merfolk had existed for eons, so tonnes of support already existed and Admiral Beckett Brass along with some of the non-Legendary Pirates added some much needed support to an under-represented tribe. But it was another Legendary cycle in Rivals of Ixalan that pushed too far — the Elder Dinosaurs. I get it, Dinosaurs were the new hotness so they needed some bang, but I think it was a bit too big. Pirates and Dinosaurs saw the largest support, but the card quality of the Dinosaurs pushed them to the forefront and appealed to many Timmy players. I bumped into quite a few Dinosaur decks at the time, and I couldn’t tell them apart, they all felt similar to play against and feature the same core set of Ixalan block cards. Why would you play any other cards when there’s a Dinosaur that gains you life, or draws you cards or wraths the board? Not to mention Gishath, Sun’s Avatar which cheats even more Dinos into play.

I never would have expected what came in the next set — 44 Legendary Creatures. Dominaria revisited the plane that started it all and Wizards tried another Commander strategy — super narrow Commanders. Super narrow Commanders are problematic for Commander, as they really work against the essence of personal expression that makes Commander such a vibrant format. This strategy was made clear with the buy-a-box promo for Dominaria: Firesong and Sunspeaker a Boros Legend that is too focused on life-gain. While the set as a whole introduced a bunch of other narrow Commanders, most of them didn’t get much traction (I’ve never seen a Rona, Disciple of Gix deck in the wild). There’s an inelegance to these forced Commanders that just doesn’t sit right with me as someone who loves the format.

To clarify, I’m not dead set against narrow Commanders, they provide value and open up the format to new and inexperienced players, but they’re not for me. As with the Block Pre-Cons, I feel that narrow Commanders limit the creativity players can have. Boros was in need of support other than aggro, but I wish that they approached it in a way with a bit more flexibility. I’ve played against a few Firesong and Sunspeaker decks and they run a similar gambit of cards Blasphemous Act, Star of Extinction and Storm Herd to name a few. But that’s not even the worst part, these super narrow Commanders can dramatically impact the secondary market, inflating the prices of cards that are only auto-includes for that list.

Now this wasn’t the case for our Minotaur friends, but a later Boros Legend did just that — Feather, the Redeemed. Feather picked up an insane amount of steam, and there are currently over 1200 decks on EDHREC. Balefire Liege floated around the $5 (USD) mark until War of the Spark released, where it jumped up to ~$23 (USD), four times the price because of it’s playability in Feather. Aurelia’s Fury shot up from being a dollar rare to costing $6 and Magnetic Theft jumped from 0.30 cents to just above $6. Magnetic Theft is an interesting one, because it makes for a pretty broken combo with Sunforger in Feather, and it’s played pretty much nowhere else.

There is one other card that’s been impacted by both of these narrow Legends: Aetherflux Reservoir. It bumped up from $1 to $3 by the time M19 came out (four months after Dominaria) and then skyrocketed to ~$8 when War of the Spark released. I can’t say for certain that these Legends caused these spikes, but the data definitely implies it. If the intention was for these narrow Commanders to introduce new players to the format with a deck that has a straightforward game plan, it worked, but it also set the precedent that building a deck can be expensive, which I don’t agree with.

Another great thing about Commander is that you can make competitive decks on a budget. However, when a player’s first experience is buying a narrow double digit priced card that only fits in one deck it doesn’t portray Commander as a budget format.

Now for a timely example, coming straight on the heels of Throne of Eldraine, the Homogenous Commander template. The spoiler season for Throne had me excited, a fairy tale/arthurian legends set seemed pretty cool and the cards that came were powerful and interesting — check out my top ten picks here.

But, Wizards is also trying another crack at Brawl (which was first introduced with Dominaria to a very “meh” response). A focus on Brawl is great for Commander, because it means there’s another place for multiplayer format support, which means more opportunity for Commander-centric cards like Arcane Signet. However, my excitement is muted as I’m anticipating that we’re going to see more homogeneity across Commanders, and that further reduces uniqueness across the format. As Commander players, we’ve been very fortunate to have increased support for Legendary Creatures — looking at the last three sets, 47 new options have been introduced, with 12+ per set. Excluding Dominaria, these three standard sets have the highest density of Commanders since I’ve started playing.

What’s got me worried though is the amount of cards with whenever this happens draw a card. Three of the four Brawl pre-con Commanders have it surprisingly stapled on (Korvold, Fae-Cursed King, Chulane, Teller of Tales and Syr Gwyn, Hero of Ashvale). I think if you took these three and removed the card draw effect, they’d still see a lot of play and would be considerably strong (Korvold would be hurt the most by this down-grade). I hope this doesn’t become the norm because we’ll see less diversity across decks, and that would ruin my favourite part of Commander — the amount of creativity that exists.

While Wizards has had some critical misses, I can’t deny that they’re trying to get it right, and they’re willing to try new things. The Commander 2019 release this year still has me excited and the format continues to grow. I think Wizards could be doing much better with their execution as it relates to Commander, but I’m glad that they’re iterating and willing to keep trying. Hopefully Wizards will drop some of these recent strategies so the format can remain a place of creativity and deck expression.