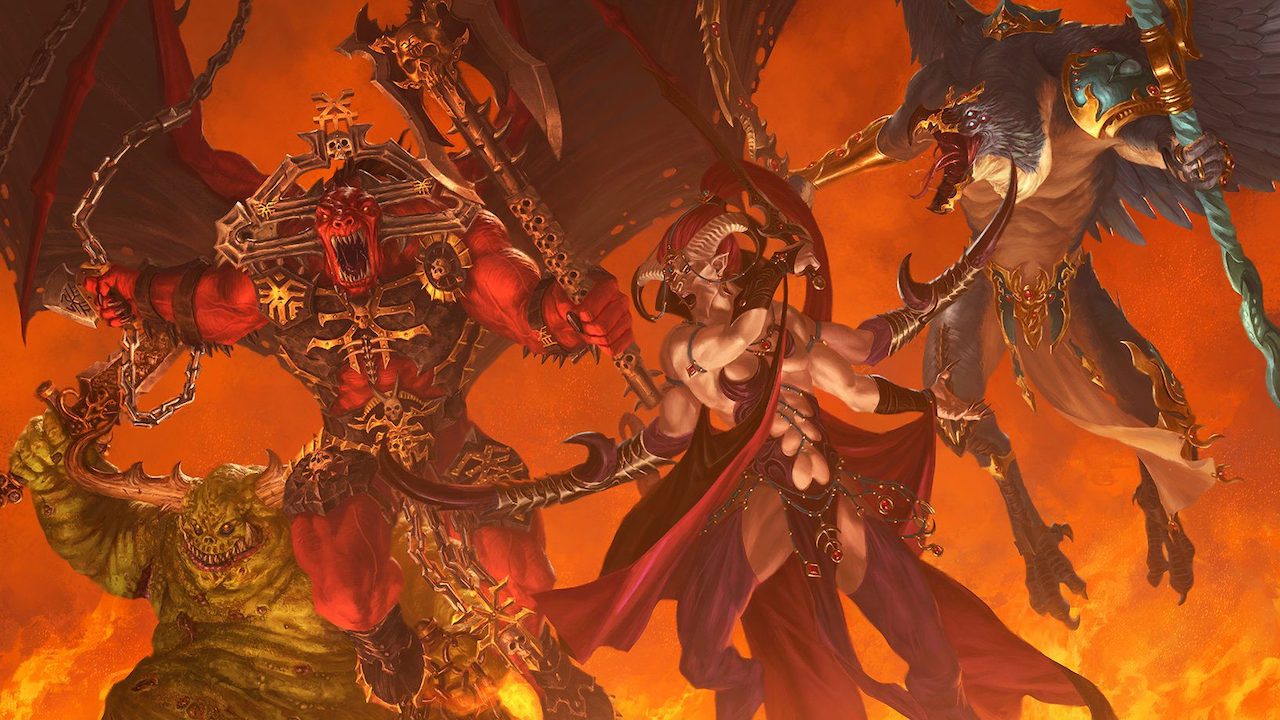 The Ruinous Powers isn’t a green deck. When it comes to Commander, it can often be quite difficult to make a deck work when it doesn’t have access to green, especially when its multiple colors. Commanders can be removed over and over again, and without land ramp it can often become quite difficult to cast them. All colors have access to fairly strong artifact ramp, but those artifacts are far more vulnerable to removal than lands.

As such, The Ruinous Powers stands far and above other decks of its color combination, due to its most excellent commander and mechanics. Abaddon leads his armies with reckless abandon, and is backed up by an impressive stable of both reprints and new designs. Let’s break down what exactly makes the deck so powerful, and what players can do to take it to the next level beyond that.

The Ruinous Powers is the one Warhammer Deck where the face Commander is actually the best one to run. Abaddon the Despoiler costs five mana for a 5/5 with trample, but his most important effect is his static ability, Mark of Chaos Ascendant. It gives cascade to spells cast from the hand (similar to Yidris, Maelstrom Wielder), but only so long as enough damage has been dealt to opponents this turn.

The deck’s other Grixis commander is Be’lakor, the Dark Master. They act as a Warstorm Surge (an extremely powerful enchantment), but only for Demons. The preconstructed deck runs 17 Demons, which while certainly enough to provide incidental value isn’t as many as you’d want in a deck built around Be’lakor. Players running Be’lakor as their commander should be sure to beef up that count, ideally to the 25-30 range.

Next are the deck’s multicolor commanders. Lucius the Eternal is probably not the best as a commander, since his natural ability to return to the battlefield undermines one of the bonuses given to players by the Commander format (the ability to return their commander to the command zone). But if players are dead-set on him, including tons of enter-the-battlefield effects like Warstorm Surge is a good way to make use of his hefty 5 power, alongside instant-speed kill spells to trigger his returning effect.

There’s also Magnus the Red, who boasts a pretty decent set of stats at 4/5 for 5, especially with flying. Players can use effects like Talrand, Sky Summoner to reduce the cost of their instants and sorceries as they cast them. There’s plenty of these in red and blue, including Murmuring Mystic, Young Pyromancer, Metallurgic Summonings and even Manaform Hellkite. Magnus is a pretty straightforward build, but he emphasizes a go-wide tokens strategy that’s often underutilized in Izzet.

Kharn the Betrayer fits an extremely odd niche – mono-red politics. Because opponents can always choose to pass Kharn back and forth between each other, it’s only correct to damage him if you can get that player to agree to pass it to you first. That’s not too hard of a deal to make (especially since they get to draw two cards), but it’s something to keep in mind nonetheless. Make sure to add Homeward Path to such a deck, so that you’re able to grab Kharn back at any time.

Mortarion is the card that fits the least with the deck’s theming as-is, and probably the least powerful commander as well. It doesn’t let the player who controls it lose any life by default, and requires a payment of mana in addition to life lost to create its tokens. Monocolor decks can potentially generate a lot of mana to feed into it through mana doublers, but then there’s the worry of having to lose that much life as well. Two separate hoops to jump through is never a good feeling.

Cascade is a powerful design space to work in, for multiple reasons. It’s a mechanic that grants both card and mana advantage, since it pulls spells from the deck and casts them for free. It’s also seen a spike in power level in recent years, as Wizards prints more and more cards to benefit red’s “impulsive draw” mechanic, which lets them cast spells from exile until end of turn. Any effect that cares about these cards cast from exile also cares about cascade.

There’s also cards that play with the cascade mechanic, in one way or the other. Let the Galaxy Burn uses a neat quirk of the rules to make its play, as X spells change their own mana value while on the stack, meaning the effective cascade cost of the card goes up the higher X is. It then makes sure not to deal damage to any creatures that come in off cascade from its effect. Noise Marine’s ability is also modified by cascade, dealing at least two damage as it enters the battlefield due to the spell cast off its cascade trigger.

And you know what’s better than cascading once? Cascading twice. Unlike a lot of other powerful mechanics in the game, cascade stacks. As such, The Ruinous Powers comes with multiple cards that grant cascade to other cards in the deck, even if they might already have cascade from their own text or from Abaddon. One such card is the Sloppity Bilepiper, who can sacrifice old cascade creatures (or even himself) to start the cycle anew.

But a far more exciting cascade granter is Dark Apostle, who costs one more mana to activate but doesn’t require any creature sacrifice. Players might not enjoy paying the extra mana, but it’s a lot easier to come by than a creature in a deck that doesn’t revolve around creating a lot of creature tokens. Tokens are at best a subtheme in the deck, and Dark Apostle ends up being a lot more reliable than the Bilepiper.

The gods of Chaos aren’t gods in the lofty or celestial sense. They’re infernal and demonic, bringing forth a vast array of vile wickedness in their wake. Several of these are more than powerful, standing out not just among their deck but as additions to the wider Commander format. The first of these is Bloodthirster, a 6/6 flier for six mana, who also boasts trample to boot.

That’s already decent stats for cost, but Bloodthirster also lets players take multiple additional combat phases. It can’t attack the same player multiple times, but the trick to making it shine is triggers at the beginning of the combat phase. It can kill a player when buffed by Xenagos, God of Revels, and that’s just the most obvious combo of its kind.

There’s also cards that explicitly do care about Demons as a tribe, the biggest and best of which is the Herald of Slaanesh. It lets players ramp into a six mana Demon the turn after it’s played (like say, Bloodthirster), and even gives them Haste. Cost-reducers like this appear in multiple tribes, but few are as efficient as this or provide additional upside to boot.

A smaller example is the Aspiring Champion. It has menace so it can get in for combat damage without too much trouble (assuming the board isn’t too gummed up), and if it does it can sacrifice itself to pull in a creature from the top of your deck. If that creature is a Demon, it deals damage equal to its power to each opponent. That’s a lot of damage for an incidental effect, especially if the Demon pulled in is bigger than the Aspiring Champion itself.

The Ruinous Powers does an excellent job of capturing the flavor of 40k’s Chaos Gods by meshing together two themes. The first is, of course, cascade. Nothing feels more chaotic in Magic than flipping cards off the top of your deck to see what might come next. But the second is Demons, and the chaos far outpaces it. The “correct” thing to do when buying the precon is to cut most of the Demon-themed cards, which is a shame since they’re genuinely very cool.

The best advice I can give is to split the precon into two decks, one helmed by Abaddon and the other by Be’lakor. The Demons deck is fairly straightforward, a combat-focused monstrosity making ample use of Be’lakor’s Warstorm Surge effect. The cascade deck is a little more subtle, using cast from anywhere payoffs like Keeper of Secrets and The Lost and the Damned to outpace opponents. Cascade is one of Magic’s best mechanics of all time — and now there’s a precon that truly lets it shine.