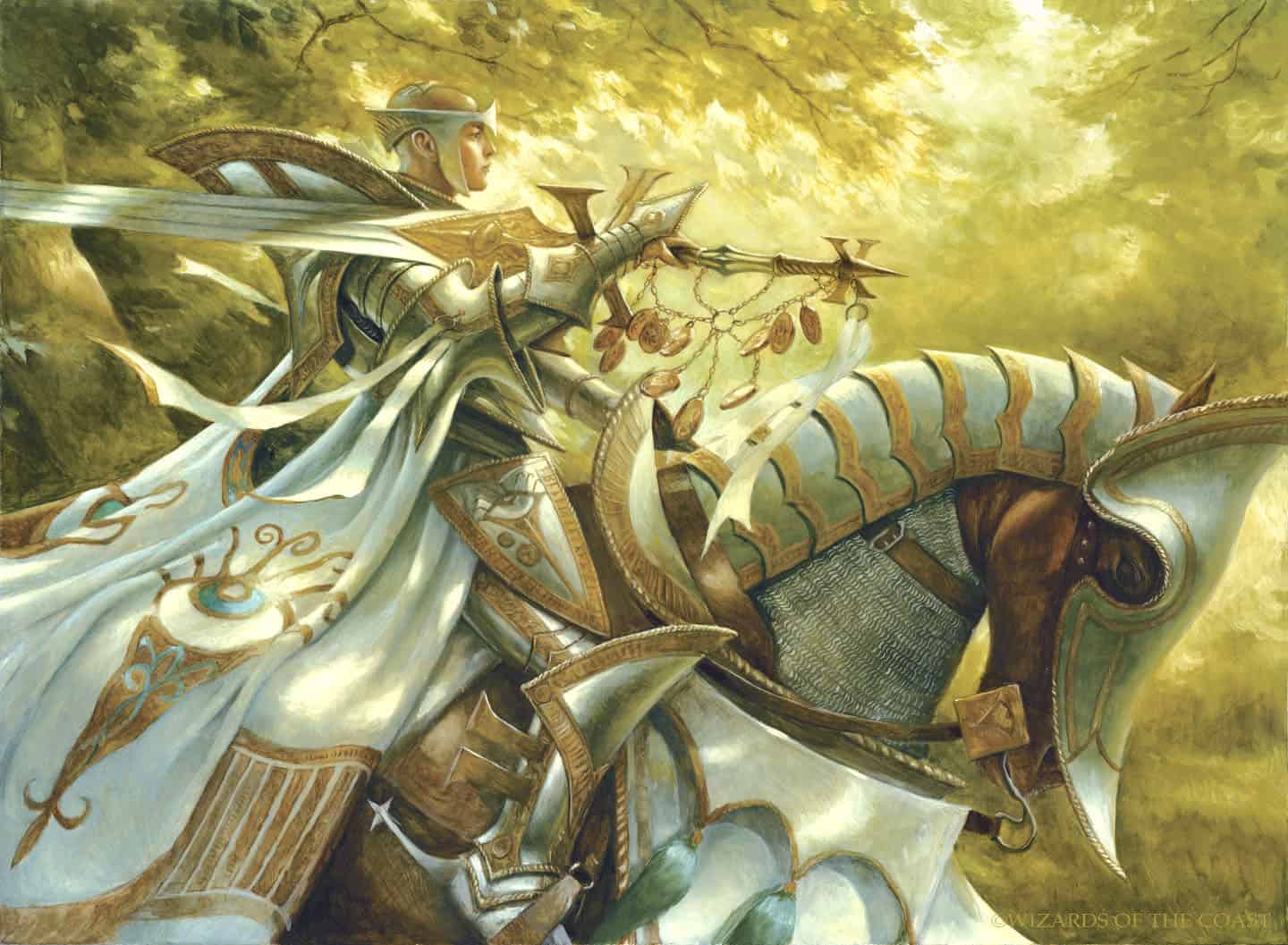 I know what you are telling yourself. Why would you play a deck with no [card]Force of Will[/card]s and no [card]Brainstorm[/card]s, and why would you ever want to play bears when you could be facing a 7/7 lifelinking, card-drawing demon as early as turn 1? At least, it was the kind of reaction when I first saw a Maverick list, and honestly, I wouldn’t blame you if you had the same reaction. I agree that on paper, it sounds sketchy, at best. But let me tell you something, after you start breaking it down and looking at it more carefully, the deck actually makes sense. Lucky for you, this is exactly what I intend to do with you today!

Before getting this show on the road, introductions are in order. My name is Karim Badrudin, and I am mostly known for playing [card]Knight of the Reliquary[/card] in every format it’s legal in. In Legacy, the format I play the most by far, I’ve been playing Maverick since 2013, after I saw my good friend Dan Freel play it in a local tournament, and even if I thought the deck made no sense and it could not possibly win a game of Magic: the Gathering, I decided to build it after I saw him crush with it. Since then, I don’t even remember how many times I have cashed with it, local and outside the border tournaments. Most recently, I finished 32nd of the SCG open in Worcester.

In this article, I will mostly ramble about what is a Maverick list, what it tries to do, what are my personal choices.

As you can see, this deck is a dominantly GW midrange deck with a mix of creature-based disruption, mana denial and value cards. The plan is mostly to use the tools at your disposal to out-grind your opponents by disrupting them while applying pressure. You will be primarily looking to attack your opponent’s ability to play spells, and limit their actions, while you keep developing your board and keep gaining value from your creatures.

As a rule of thumb, every line of play that reduces your opponent’s ability to play magic is usually the line you are looking for, especially early to mid game. Late game, the game will probably devolve in a grind with your opponent, so that’s where your value creatures are important. Because of this and the nature of the creatures you play, Maverick is naturally good against decks that run on low resources, such as Delver decks. They are in a situation where they have to deal with every creature you have in order to execute their own game plan.

With that said, let’s break down the card choice:

I would like to put this card in its own category and talk about it first. This is the card that glues the whole deck together. This card is whatever you want in the deck, whether it is mana ramp in the early game, or a a hate piece, or even a game ending threat. It is the reason why you can afford to play so many 1-ofs in this deck without breaking its consistency. This is the most important card in the deck, and there is a very good reason why this card is banned in Modern.

This deck relies on playing 2 and 3 drops in order to execute its game plan. Most of the time, the correct line on the second turn is to land a 2 drop, and to wasteland your opponent on the same turn. In order to do this, mana dorks are instrumental. In order to maximize the chances of mana acceleration for the second turn, we play 5 mana dorks, and with [card]Green Sun’s Zenith[/card] being able to find [card]Dryad Arbor[/card] on turn 1, we have 9 ways to find that acceleration on turn 1.

As a side note, this is a demonstration of Green Sun’s Zenith’s power, as it counts as a mana accelerant without explicitly being one, and freeing spots for other cards (as a comparison, in Modern, a deck like Bant Company that has the same kinds of mana requirements must play 7-8 actual mana dorks). Now, for the actual mana dorks, it is somewhat straightforward. [card]Deathrite Shaman[/card] is one of the best cards in Legacy right now and does a lot of things for a 1 mana creature. [card]Noble Hierarch[/card] and [card]Birds of Paradise[/card] complete the dork package, and I just split between the 2 of them because there are some corner cases when I need one more than the other (exalted attacks through [card]Ensnaring Bridge[/card], flying bird to connect with an equipment).

This is the protection package for your creatures. So, again very straightforward, you basically want to keep your people alive. The thing to talk about is the odd inclusion of [card]Sylvan Safekeeper[/card], that I prefer over the 4th mom. Basically, I like having the option to tutor for him when needed and have a protection effect on demand. After that, trading lands for removal spells is usually not a bad thing, when done responsibly. He also happens to enable some sweet plays, like making your Knights of the Reliquary potentially lethal, or keeping 0 plains in play when your opponent has copies of Massacre in his deck (Storm).

Knight of the Reliquary

This is another important card in the deck, because it does so much by itself. It doesn’t take long for her to become bigger than anything on the board, while fetching wastelands turn after turn, which is her principal function as it goes so well with our general game plan of constricting our opponent on resources, while developing a game winning threat. Alternatively, you have the option to assemble the Stage-Depths combo over 2 turns, draw cards with [card]Horizon Canopy[/card], or even find a Karakas for those problematic Tentacle monsters. Morale of the story: bad idea to let you untap with this.

The main hate-bear of the deck. With so many people playing 1 mana instants and sorceries, Thalia is important for this kind of deck in order to work. The tax she imposes slows down most of our opponents enough in order for us to pull ahead of them, especially against decks that are made to run on 2 or 3 lands, such as Delver or Storm. With wasteland, she becomes a nightmare to deal with.

You will notice that we are playing only 2 [card]Stoneforge Mystic[/card]s. The reason is that I prefer to use equipments as a way to support my creature, rather than making it a main plan, which is why I am also not playing [card]Batterskull[/card]. As we are not in the business of getting our equipments on the board early, and as we do not want to lose tempo by waiting a whole turn and putting [card]Batterskull[/card]s in play, we are playing the bare minimum required. Jitte because it is broken, [card]Sword of Fire and Ice[/card] to generate card advantage and getting through [card]True-Name Nemesis[/card].

A Maverick list would not be complete without its 1-ofs to tutor for with [card]Green Sun’s Zenith[/card]. So, these creatures are here to take care of specific needs you might have during a game, while still being decent by themselves. Some of them are self explanatory (Ooze, Pridemage), so I will sip them.

For the rest, [card]Gaddock Teeg[/card] is there for control matchups to block Terminus and Jace, while auto winning against some combo matchups (ANT, namely), Ramunap [card]Excavator[/card] is excellent when you have a land fetching machine in your deck and [card]Scryb Ranger[/card] is incredible and gives you 2 activations of any tap effect creatures (namely [card]Mother of Runes[/card] and [card]Knight of the Reliquary[/card]), while teaming up with [card]Dryad Arbor[/card] for infinite blocks. Protection from blue also means that she blocks [card]Delver of Secrets[/card] all day and goes through Balefux Strix.

Lastly, the oddity in my list is Leovold, which I find so broken that I feel like 1 [card]Tropical Island[/card] is a small price to pay for screwing up half the format’s general plan (read: [card]Brainstorm[/card]). Between mana dorks and [card]Green Sun’s Zenith[/card], it usually isn’t a big deal to get him on the table on time, and he pretty much locks up games if you can protect him.

Lastly, we play 5 pieces of removal in [card]Swords to Plowshares[/card] and [card]Abrupt Decay[/card], nothing unusual in these colors for a midrange deck, and we play a [card]Sylvan Library[/card] because drawing cards in non-blue decks doesn’t happen often, so we should take advantage of it when we can.

As for the mana base, the important part is to play 4 wastelands as they are vital for our deck to work correctly, and then we play a bunch of singletons we can fetch for, namely [card]Horizon Canopy[/card] and Karakas. On top of those, we also play Thespian Stage and [card]Dark Depths[/card], which is a bit more unusual in those lists. My reasoning behind them is that is that I felt there are situations you can only win by doing something unfair, for example in situations where your Knights can’t attack or will be blocked forever, or in situations where you need to kill someone fast because you will never have time to establish your normal game plan. In these situations, it makes your Knights of the Reliquary dangerous in another way. Besides, it’s also nice to have a “oops, I win!” button in your non-blue fair deck.

To finish, as for the sideboard, I feel like it’s very straightforward.

[card]Thoughtseize[/card]: Anti fast combo, mostly. You are looking to slow down your opponent in order to land your annoying creatures

[card]Ethersworn Canonist[/card]: Because you don’t want to get stormed, mostly.

Choke: Because a lot of people like playing blue spells, and some decks can’t even get it off the table (which is also known as a “free win”).

Sanctum Prelate: Because you want some extra combo protection and it plays a good role against control decks.

Gideon, Ally of Zendikar and [card]Elspeth, Knight-Errant[/card]: Because I like having plainswalkers in order to fight against other midrange or control decks as they are hard to deal with, especially if they are non-blue and of they can’t be Abrupt Decayed. So, I play a Gideon because he is very solid by himself, and can threaten to close the game fast, while Elspeth was more of a test to have extra invasion to go over [card]True-Name Nemesis[/card], while still having a card that can make tokens.

So that’s about it for me. As such, this is what Maverick in Legacy looks like. No [card]Brainstorm[/card]s, no Ponders. Just habebears, 100% fun and 0% durdling. Magic as it was meant to be played!