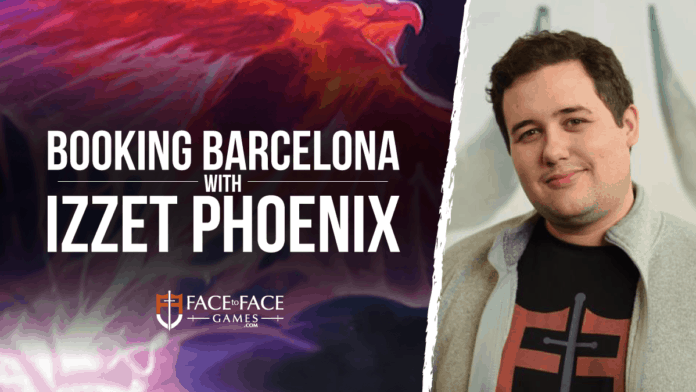 It’s been more than a year since I’ve won a Magic tournament. The weight of that hard, cold truth has really been getting to me lately, making me feel like a fool whenever someone at the game store tells their friends that they just played against a pro. What makes a pro, other than the sum of their competitive accomplishments, after all? I’m no pro, I always answer when prodded. A pro would be qualified for the next Pro Tour. A pro would have won his match against Matt Nass to make Silver. Or at least the match against Andrew Cuneo or Arne Huschenbeth. Maybe even the one against Ari Lax. I suck, and a pro would be good.

I’d be lying if I said that I truly came to terms with this dearth of success, but I sure as hell tried. I joked about being washed, scaled back my travel plans and tried to embrace my new identity as the guy who tops the local leaderboards, rich in store credit and not much else. But that just isn’t me. The only way I can stave off the demons is by feeling like I’m worth something, and foolish as it is, this made my near-miss at the SCG in Syracuse sting more than anything in recent memory. Who am I, if I can’t even Top 8 every Standard SCG Open I play? I used to be so confident in this format, just racking up the wins. Was it just variance? Am I actually washed, or was I never good? Why should anyone trust what I have to say if I can’t even post the results to back up my opinions? Is this imposter syndrome, or just the human condition?

Damn, I need a therapist.

Anyways, I won an MCQ with the same deck from the SCG two weeks later, and I’ve been having a great time lifting weights, so I guess everything will be ok, at least for a little while longer.

There’s a lot of disparity between different Phoenix lists these days, and my take on the deck is definitely a bit of an outlier. The strategy has been around forever, and I think everyone pretty much knows how it plays, so I want to treat this as less of a primer and more of a discussion of individual cards and deckbuilding principles. To that end, the meat of today’s article will be these bullet points, with a (free) sideboard guide to top it off, as a gift to the ravenous masses. 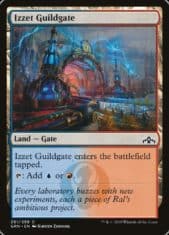 It shouldn’t surprise you to learn that the Crackling Drake deck has bad mana, but the colour requirements in Phoenix are often quite strenuous. You want early red to Shock and Lava Coil, but often need triple blue on turn-three to recur a Phoenix under Electromancer. You then need double red on turn-four for Finale of Promise and Crackling Drake. The land count is fairly low, so you’re already leaning on the cantrip suite to find your sparse lands, and having to bottom a Mountain off an Opt because you’re looking for an Island is far from ideal. We’re well below the point of diminishing returns for adding additional coloured sources to the deck, so I firmly believe that the singleton Izzet Guildgate is, in fact, worth it. 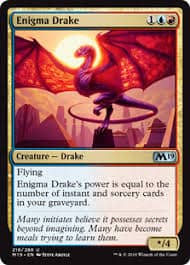 This is the big one, I suppose. After losing a traumatic win-and-in to mono-red at SCG Syracuse, and expecting the deck to be extremely popular at a local MCQ, I wanted to take significant steps to shore-up the matchup. I played Augur of Bolas during the Arena qualifier, but found it to be an underwhelming card with little value other than the often-irrelevant body. A little voice in the back of my head noticed that there was very little actual removal in the format, and suggested trying out more Drakes. The actual Drakes deck, of course, sucks, because trying to play Dive Down into Teferi, Time Raveler is an absolute disaster, and it lacks the staying power to outmuscle the format’s midrange decks, but I figured there was no reason I couldn’t spend my flex slots on a couple more Drakes. You’re essentially pre-boarded for red now, but without having to play any particularly anemic creatures. 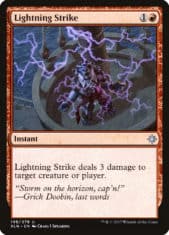 There are simply no creatures in Standard that I would want to Lightning Strike that I would not prefer to Lava Coil or even Beacon Bolt. You can only spend so many slots on spells that don’t say “draw a card” on them, and I’d rather max out on my ability to interact with the widest variety of creatures than have the option to throw damage at my opponent’s face. Chances are, if you’re able to kill a player with Lightning Strike, that you would have won that game anyways. As for the card’s ability to mop up planeswalkers, this deck, and specifically my build, already excels at doing this, so I’d rather shore up my weaknesses, like Lyra Dawnbringer and Rekindling Phoenix, than go deeper on my strengths. 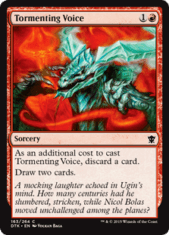 Please stop playing Discovery // Dispersal in your Finale of Promise decks. It’s not really a better card than Tormenting Voice and doesn’t actually accomplish anything significant when you fail to hit a Phoenix. Furthermore, it can’t be cast off of Finale, and uses a colour of mana that’s already over-taxed on the turn where you go off. Just play three or four copies of Tormenting Voice and call it a day. As an aside, Radical Idea is quietly the best card in this deck, so don’t you dare shave any copies. It’s important to sustain the velocity that makes this deck powerful. 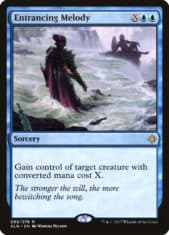 I see very few copies of this powerful sorcery in Phoenix lists these days, an act of great disrespect to the noble Mind Control. Not only is Melody just as effective at beating white aggro as Fiery Cannonade, but it helps turn around your matchup against various green decks. Wildgrowth Walker got you down? Steal it. Rekindling Phoenix causing problems? Steal it. Just be sure to keep it in the sideboard against Teferi, Time Raveler decks.

Now, if you know me, you know that I love me some counter-magic, but the harsh reality of War of the Spark Standard is that every deck against which you’d want counterspells has four copies of Teferi, Time Raveler in it. As juicy as it is to Spell Pierce a Command the Dreadhorde, the liability of having cards stuck in your hand that could have been powerful sideboard threats is just too significant. As such, the slots that would normally go to Negate or Spell Pierce are used to load up on cards like Saheeli, Sarkhan or more copies of Legion Warboss to keep the board clean of planeswalkers and the opponent’s life total too low to effectively use Command the Dreadhorde. We’re circumventing the problem entirely!

As explained above, we’re close to pre-boarded for this matchup. We have a lot of additional threats in our maindeck, and all we can really do to make things better is replace some of the deck’s air with a bit more removal. The most important cards in this matchup are cheap removal and Drakes. Expect them to be playing a full set of Experimental Frenzy, and make sure that the play patterns you choose to take are able to beat a weak or late Frenzy. Nothing’s beating a strong one, after all.

The older, stock versions of this deck that feature a bunch of creatures in addition to Hero of Precinct One are a great matchup. We simply bury them under card advantage, and they’re not great at beating either Arclight Phoenix or Crackling Drake, so we eventually kill them in the sky. We board out Finale because of Teferi, and a couple copies of Tormenting Voice to hedge against Dovin’s Veto. Be conscious of the fact that many current Hero lists have elaborate sideboard strategies for us that involve cutting their creatures and going hard on problematic answers like Cry of the Carnarium. If you see this happening, consider boarding as you would against Esper Control.

This is simply how we would want to board against Esper decks with fewer creatures in them. The line between control and Hero has been blurred as of late, so you’ll need to keep your head up and use your judgment to determine just how you want to board. If you’re unsure, maybe leave in a few additional copies of Lava Coil. This matchup is significantly worse than the Hero version thanks to their increased ability to beat Phoenixes, and is legitimately very troublesome unless you manage to resolve planeswalkers, so keep that in mind when making mulligan decisions.

We simply don’t have time to be messing around with Radical Ideas in this matchup, so they come out in favour of more ways to interact on board. I recommend sticking to approximately four one-mana removal spells here, but if you see additional cards that die to Shock, feel free to adjust accordingly. This matchup is quite bad without Entrancing Melody, and quite good with it. Don’t let them overwhelm you, and you won’t have too hard a time.

We take a similar sideboarding philosophy to Esper Hero here. The key to this matchup lies in being aggressive, so don’t be too reluctant to take risks in order to play to the board. You need to keep planeswalkers as well as their life total in check, so taking the more aggressive line is usually correct.

This matchup plays very similarly to the 4C version, except we get to bring in Entrancing Melody to deal with opposing Wildgrowth Walkers and Hydroid Krasis without any fear of getting blown out by Teferi, Time Raveler.

This matchup is extremely easy. Their removal spells of choice, Shock and Lightning Strike, are anemic at best against us, and recursive Phoenixes will easily keep planeswalkers off the table. We leave in a single copy of Lava Coil in addition to the two Beacon Bolts as a sign of respect for Sarkhan’s Dragon token — otherwise Shock is a superior card thanks to the threat of Legion Warboss.

Tormenting Voice is a bit of a liability in this matchup, as people insist on bringing in counterspells in the mirror. To punish them, simply cast Legion Warboss and laugh all the way to the bank. Shock is often mediocre, but there is a game of chicken to be played around Warboss, so be ready to bring a couple more copies in if needed.

This is as close to a bye as they come. Kill their stuff on your main-phase to prevent them from playing Venerated Loxodon, and as long as you don’t get run over, the combination of Entrancing Melody and your Phoenix/Drake gameplan will quickly end the game.

Mass Manipulation can be a rough one, especially the Simic version with fewer planeswalkers for you to prey on. Try your hardest to keep Nissa off the board, and make your second priority killing as many mana dorks as you can.