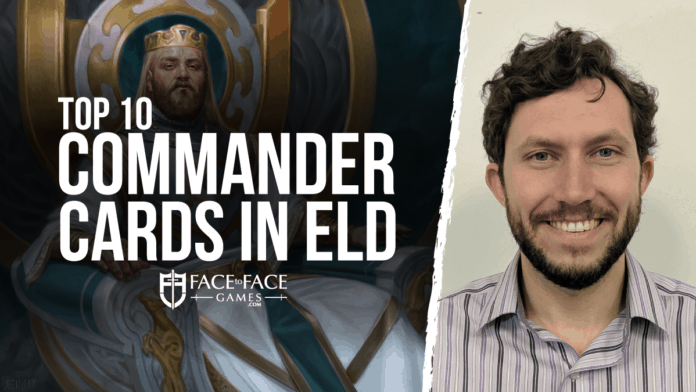 Throne of Eldraine released recently and there are some sweet new Commander cards I’m excited to try out, and I hope you are too. The picks in this list aren’t format defining, but they open up some new strategies or offer some additional redundancy. Throne of Eldraine threw us a bit of a twist with Brawl decks, and some cards are only available in those pre-constructed decks. This list will include cards available from that printing, but exclude the obvious ones like Command Tower and Arcane Signet.  Let’s dive in! 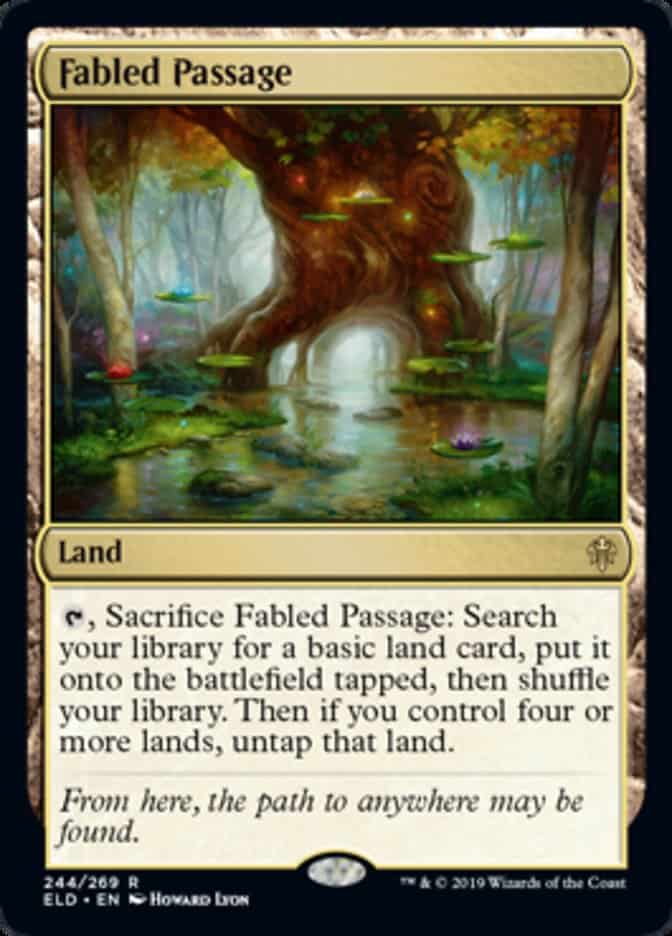 There’s no doubt that fetchlands are awesome, and Fabled Passage seems like a perfect fit for Commander. If you play it early it’s like an Evolving Wilds/Terramorphic Expanse and later on it’s closer to a traditional fetch (it’s still limited to basics, but fixing shouldn’t be passed up, especially in 3+ colour decks).

9. Drown in the Loch 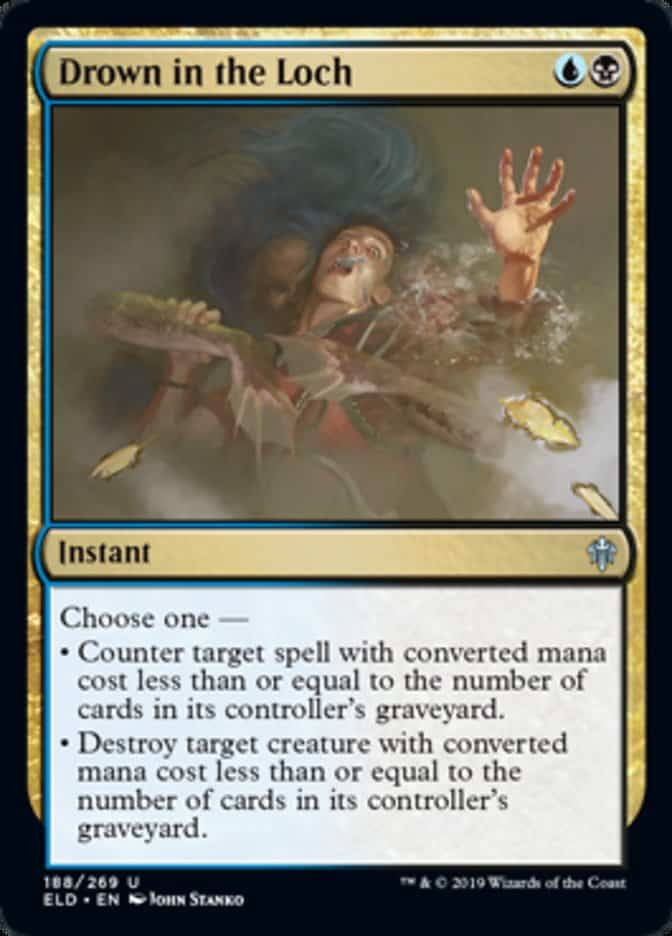 This two CMC counterspell/removal spell is sweet for Commander. It’ll outperform many others in mill strategies specifically, but it’ll still be a star in those games that go late. Since most players are trying to double-spell as quickly as possible, it’s pretty likely that by turn seven most people will have seven or more cards in graveyards, especially if this follows a board wipe. 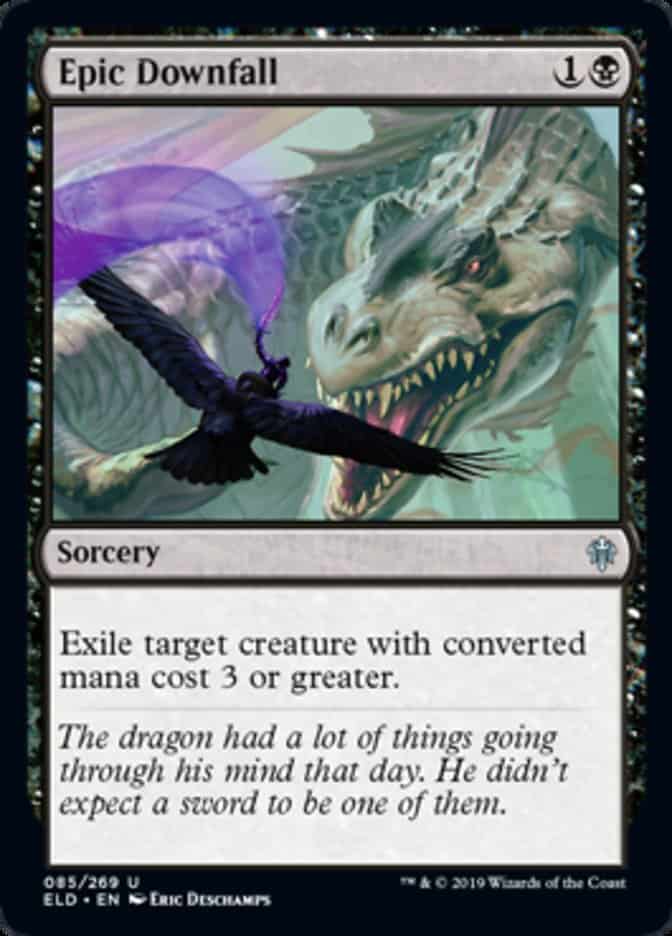 Black has been getting more exile effects and I’m a fan. I can’t tell you the number of games I’ve lost to an indestructible Tuvasa, the Sunlit or had to deal with reanimator strategies that devalue removal. It is a little limited being sorcery speed and only hitting targets above three CMC, but exiling a threat at a key moment for two mana feels awesome. 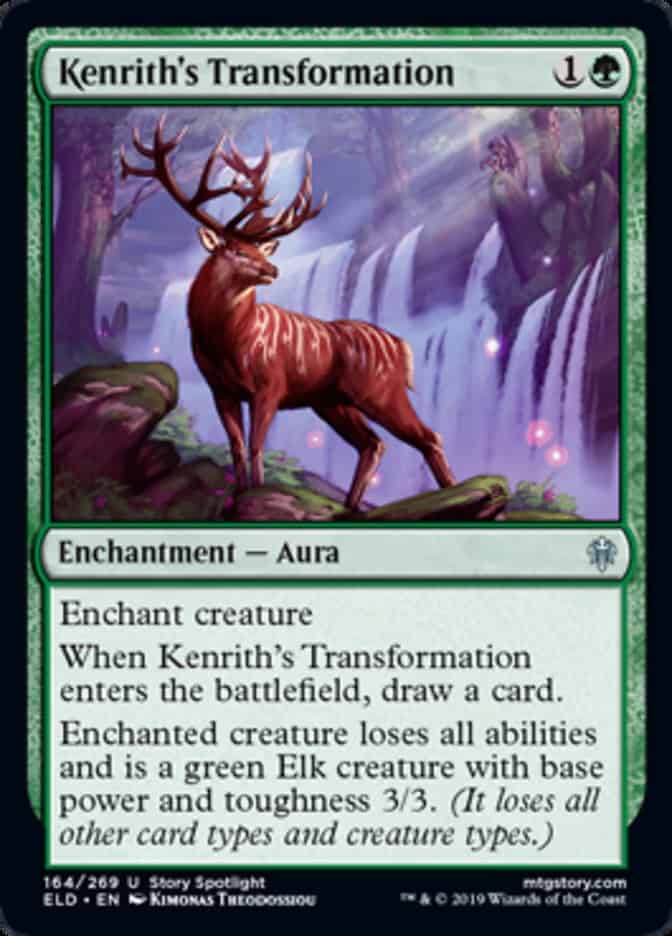 While it’s no Song of the Dryads it’s a great alternative to deal with hard to remove creatures. Blightsteel Colossus? How about a teeny elk instead. Along with removing effects (Teysa Karlov becomes much less of a nuisance), this handy enchantment also draws you a card so it replaces itself. I’ll be running this in almost all of my green decks. 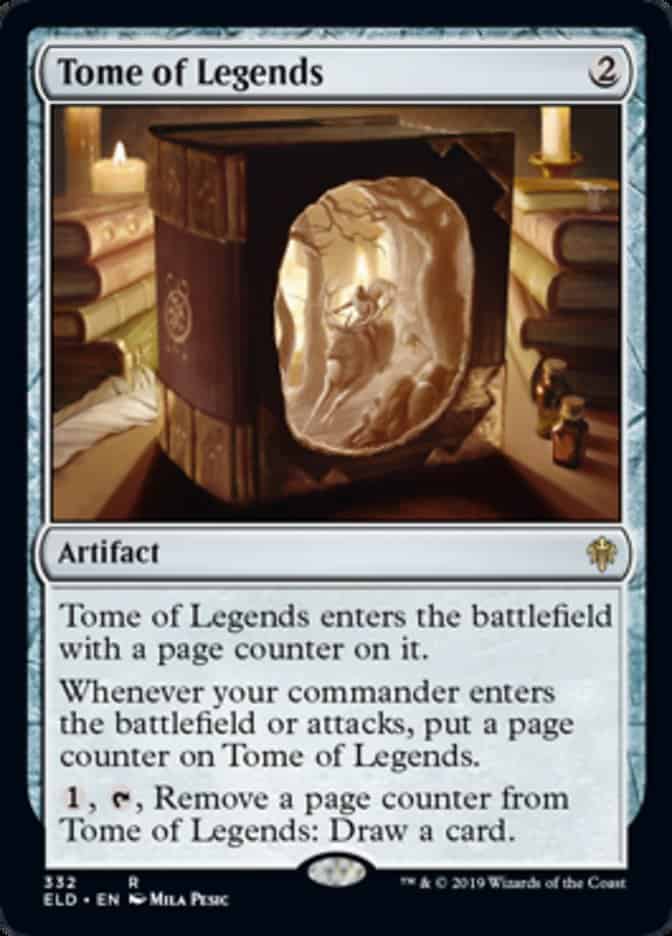 Play your Commander and draw cards? Need I say more? This one is a Brawl deck exclusive, so I’d pick it up soon since the price will only go up from here. 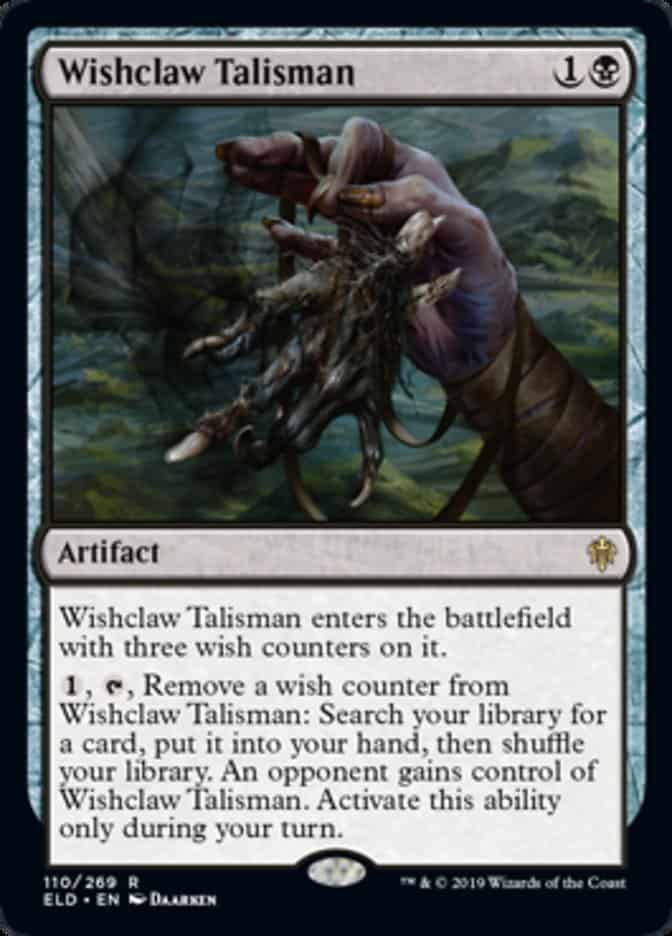 At first glance you may think “Why would I want to give my opponent a Demonic Tutor?”. Well the enemy of your enemy is your friend right? Why not strike a deal with an opponent to both pull removal spells to deal with a player who has a huge board presence, or a game winning combo about to go off. Symmetrical effects can be more beneficial depending on who you make that deal with. 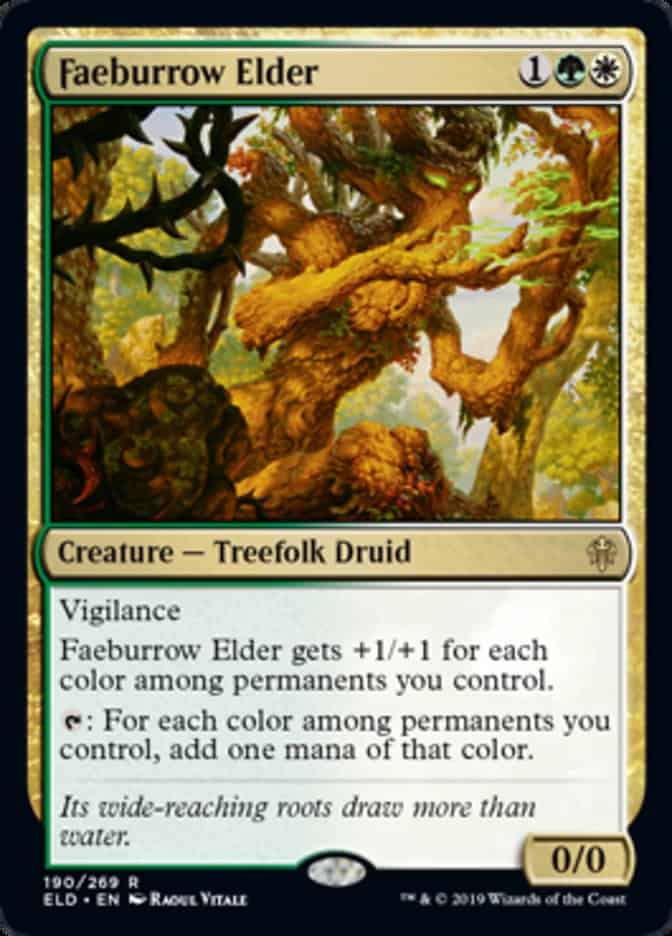 Bloom Tender? It’s a pretty good card. Faeburrow here offers a similar effect at a more reasonable price. It’s colours are a little more limiting, but this will be an all star in any five colour deck. 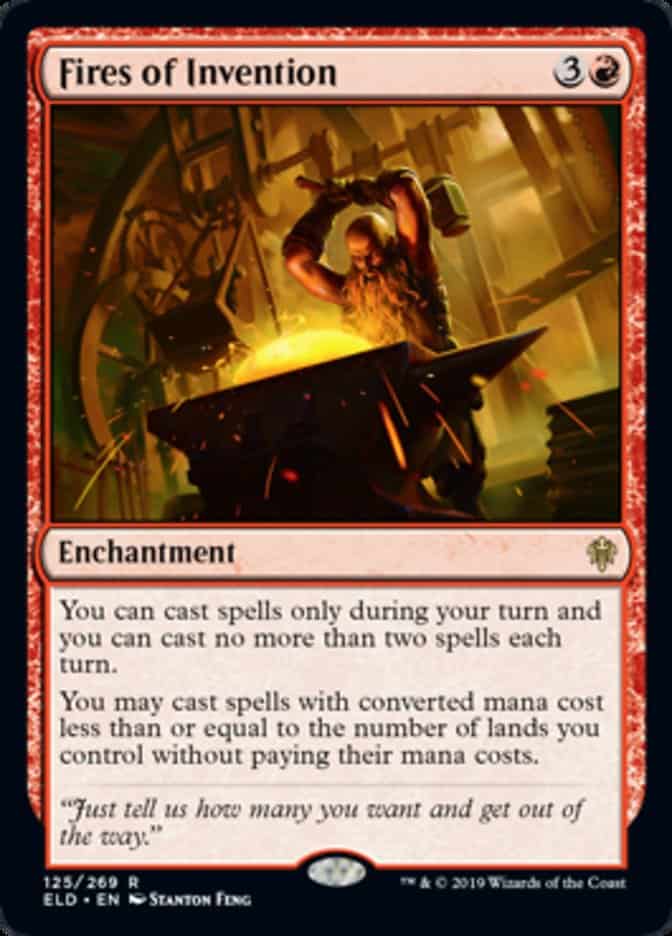 When I saw this card spoiled the only thing I could think of was how bad it’s going to feel being on the receiving end of a mana doubler like this. Cheating mana is a pretty consistent way to win at Magic and casting some big CMC spells for free would feel pretty great. I can’t wait to play this on turn four and follow it up with two five drops the next turn — and it only gets better the longer the game goes. 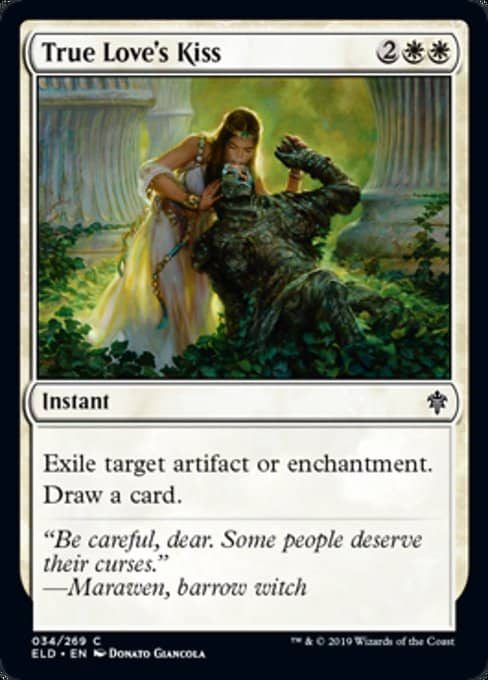 White has a lot of good artifact and enchantment removal already (Crush Contraband, Return to Dust, Fate Forgotten or Forsake the Worthy at instant speed), but True Love’s Kiss adds some card draw, which is severely lacking. The added redundancy doesn’t hurt either.

1. Escape to the Wilds 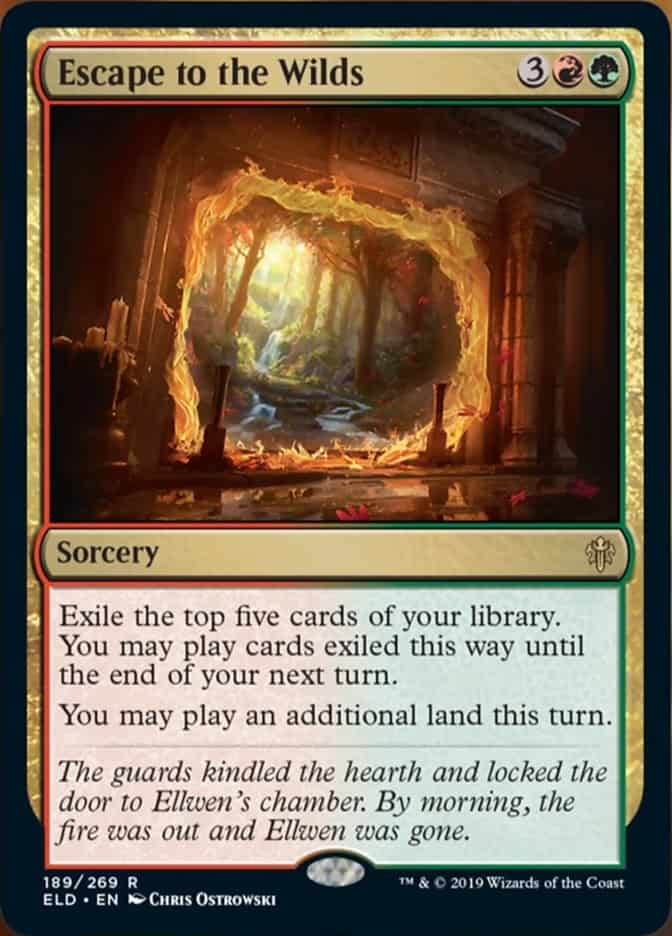 My initial assessment of this card was lackluster. Spend five mana to pitch five cards of the top of your deck seems like a poor choice at face value. Playing with this card tells a different story. It can smooth your land-drops, and dig through some bad top decks. I’d recommend giving it a try before you write it off.

There we have it, 10 new cards from Throne of Eldraine to squeeze into your 99. These are by no means the best cards from the set, and there are a lot more that hit some narrow needs. These cards are pretty safe bets for most decks, and I’d recommend picking them up while they’re under the radar.