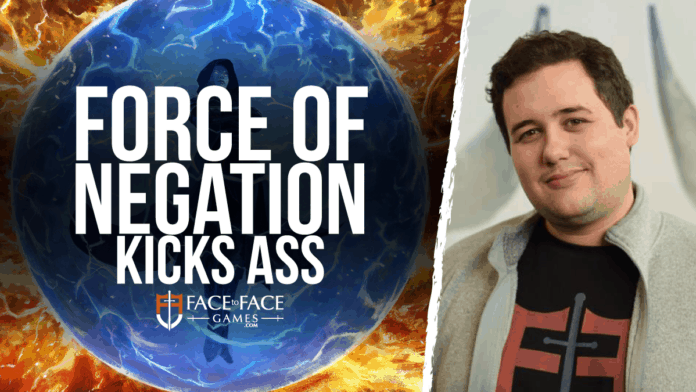 I was wrong. It won’t happen a second time, so savour it while you can, haters.

The entire Modern Horizons spoiler has been released and the cards are powerful and mostly reactive, with most of the strong proactive cards encouraging interesting deckbuilding. There’s nary a prison card in sight, certainly not a three-mana Dig Through Time with a static ability that randomly shuts down a bunch of decks. They would never print something like that, right? 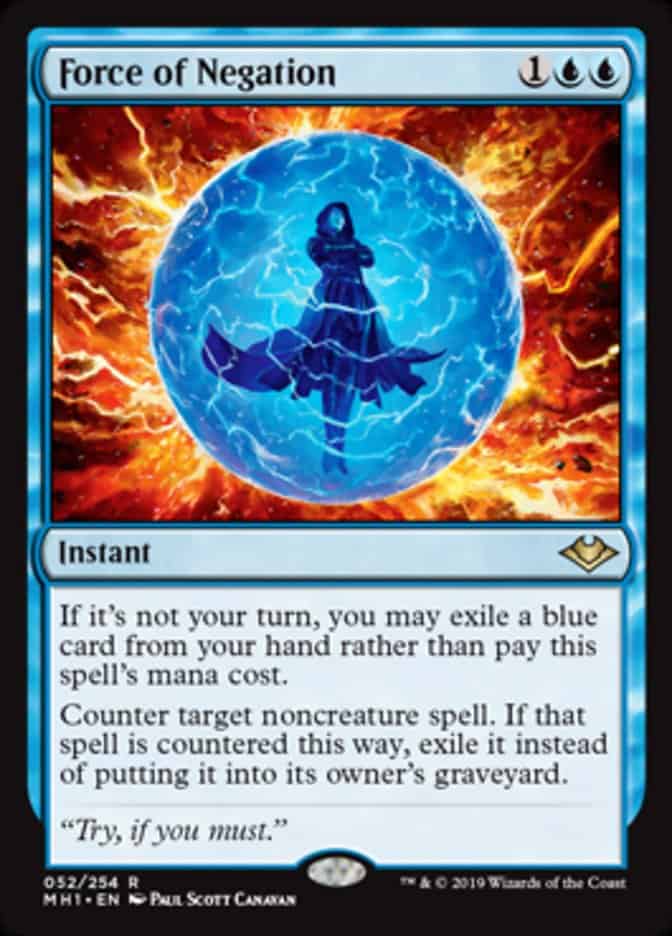 Luckily for us blue mages, not only does Narset, Parter of Veils exist, but Modern Horizons appears to include a card that is powerful both with and against Narset. I’m sure you’ve seen it by now, but Force of Negation is the kind of design that makes me truly excited for the future of the format. Is it elegant? No, but it plugs holes in the metagame and, thanks to its awkward timing restrictions, ensures that it’s only used for good (fun, interactive games), rather than for evil (Simian Spirit Guide). This has some implications: it’s no Force of Will, meaning that you’re not supposed to just jam this in every reactive blue deck, and maybe not even in the maindeck. In order to better understand when to play Force of Negation over something like, say, Ceremonious Rejection, let’s take a look at the card’s restrictions and what they mean for not only deckbuilding, but also gameplay.

So first off, this is not a Counterspell, but rather a Negate. If you’ve been following Modern control decks as of late, you’ll notice that they eventually settled on multiple maindeck copies of Negate, or now Dovin’s Veto, thanks to the card’s strength in the format. That’s a great sign for Force of Negation, but it does essentially relegate its maindeck use to the same control strategies that would want a Negate-effect in game one.

This might be the most important, and most unprecedented, limitation on this card. To wit, you cannot use the Force of Will-style alternate cost on Force of Negation in order to protect your own spells, or beat instant-speed removal. This is a genius design decision as far as I’m concerned, as it allows Modern to be graced with a safety valve that prevents decks like Neoform Combo from taking over the format, without warping the metagame around blue cards like a Force of Will reprint might have done. This further restricts the utility of the card to decks that are either fundamentally reactive, or slow enough that they need the ability to interact cheaply with faster decks out of the sideboard.

There’s a silver lining here, however, as this clause encourages you towards what might be the single strongest application of Force of Negation — allowing you to tap-out on your turn for a powerful but risky play, while stopping your opponent from killing you in the window you provided them. We’ll get back to this in a minute.

“You may exile a blue card from your hand”

This might be the most obvious deckbuilding restriction — you probably want to have a deck full of cantrips and non-essential blue spells that you can pitch to Force of Negation in order to make it better than a strictly-worse Dissipate. This doesn’t skew things too much in Legacy, where blue decks have access to a suite of obscene cantrips — but we’re stuck with some real dregs in Serum Visions and Opt. As such, Force of Negation is significantly better in strategies that already want access to a significant number of normal, on-curve blue cards.

It’s pretty obvious where this is going. Narset, Parter of Veils has already pushed Azorius Control into the “best deck” discussion, and suddenly being given the ability to safely tap-out without holding up Dovin’s Veto for, say, a Karn, will drive this deck’s power level through the roof. The deck is exceptional at dealing with creatures, between Supreme Verdict, Path to Exile and many of its planeswalkers impacting the board. These days of hesitation are over, and the era of Azorius tap-out is upon us.

Let’s go over some of the changes to the deck inspired by the addition of Force of Negation. Starting from the top, I’m already on the fence about whether Hieroglyphic Illumination is better than Opt pre-Modern Horizons. The upside of the Scry 1 is significant, but the option to cast Inspiration is very valuable in a lot of matchups, and Illumination has a bunch of hidden upsides, like ignoring Thalia, Guardian of Thraben, Chalice of the Void and Damping Sphere. With Force of Negation in your deck, the ability to make up for lost card advantage pushes Illumination forward into likely being the superior choice.

Snapcaster Mage no longer makes the cut, despite always being somewhat anemic in the non-red control decks of the format. We want to tap-out more than ever, and Force of Negation doesn’t synergize very well with the ol’ Ambush Viper, so we get to play the Rest in Peace version of the deck. This means we’re stuck playing Mana Leak instead of the often-superior Logic Knot, but so be it. Our planeswalker suite gives us such control over the long game that a slight depreciation in counterspell quality really isn’t that big of a deal.

There’s been a downswing in Cryptic Command in Azorius lists as of late. It’s always been one of the most questionable cards in the deck, a relic of times past, when Snapcaster Mage and Electrolyze reigned supreme. We now have access to better forms of card advantage in Narset and Jace, and never want to be forced to hold up 1UUU just in case our opponent has a good spell. The bounce mode is largely replaced by our Teferis, so the card is just no longer necessary. Those slots go to a second copy of Detention Sphere, a nice answer to a wide variety of permanents that just happens to be blue, and additional copies of Narset and Jace, to let us take advantage of our new-found ability to tap out all the time.

Lastly, a split of two Supreme Verdict, one Wrath of God and one Day of Judgment has been popular recently in order to best play around Meddling Mage. I think Force of Negation encourages us to swing the split in another direction in order to have more of our superfluous removal suite be pitch-able in matchups where it’s poor.

As for the sideboard, things haven’t changed too much. Geist of Saint Traft is the all-star in the mirror, especially if our opponents also realize that Snapcaster Mage’s stock is at an all-time low in this deck, as one of the only reliable ways to take down opposing planeswalkers with little hassle. Porphyry Nodes makes the cut as an additional “mass” removal spell thanks to its synergy with planeswalkers. It encourages your opponent to keep the board clear for a crucial turn where we can safely stick a planeswalker, then wrath when they over-commit to deal with it.

Honestly, I can’t wait to play with Modern Horizons. The format’s in desperate need of a shake-up, and I feel like this set includes just enough power to keep the format grounded, with its existing decks still capable of competing, while adding some spice to keep things fresh. If that doesn’t get your juices flowing, then just think about pitching Supreme Verdict to Force of Negation a Karn Liberated, then untapping and slamming Jace, the Mind Sculptor. Live your best life.

You can pre-order Modern Horizons sealed product and singles right here, on facetofacegames.com!