We’re in the middle of one of the most influential shifts in the history of the Modern format. Just days ago, Wizards of the coast made an announcement that has changed Modern for good: 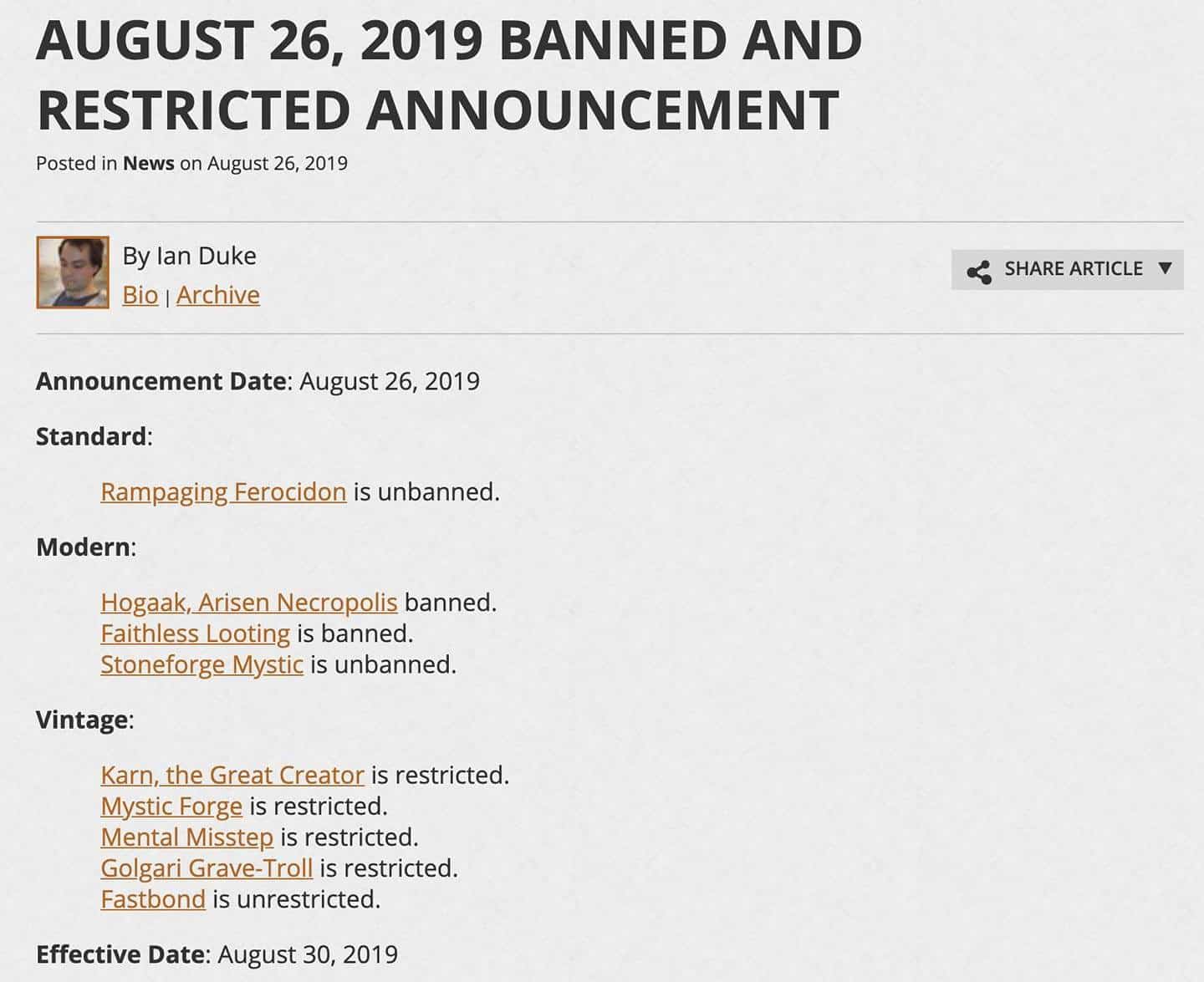 After they quickly realized that banning Bridge from Below wasn’t enough to stop its dominance, Wizards banned Hogaak, Risen Necropolis, which quickly became one of the most format-warping mistakes ever printed. Surprisingly to me — but justifiably — they also took Faithless Looting down with it, a card that was widely considered to be the culprit for enabling broken graveyard strategies all across Modern.

These bans were enough to be a game-changer on their own, but they weren’t done.

After years of players asking for a Stoneforge Mystic unban — similar to Jace, the Mind Sculptor before it — Wizards sent shockwaves through the Modern community by finally releasing her shackles.

Jace and Stoneforge have reunited once again.

What’s old is new again, but it’ll take some getting used to, especially if you’re new to Stoneforge Mystic.

If you’re feeling overwhelmed by the changes, the plethora of different deck options, and aren’t sure where to go from here, trust me, I understand where you’re at.

Sometimes, you need to learn from the past to help inform the present.

Approximately seven years ago, Jon Finkel made history by winning the 2012 Player’s Championship with a Blue-White Aggro deck — which was famously known as “Caw-Blade” after the broken Standard deck — which then morphed again and later became known as “Stoneblade” in Legacy.

Stoneforge Mystic and Jace, the Mind Sculptor were banned in 2011 when Extended turned into Modern, and in 2012 this midrange version of the deck showcased how the archetype could adapt without them.

What’s important to consider here is how much Stoneforge Mystic will improve the competitive viability of fair decks in Modern, such as UWx Midrange. Much like Azorius adapted then without SFM, it’s now going to mutate back to something that resembles its former self. What I’m getting at here is that Azorius creature decks have had success here and there in Modern-past, and they just added one of the most powerful midrange threats in the history of the game.

While she will be played control decks, which undoubtedly improves with her inclusion, she’s historically utilized best in a deck with other creatures and a proactive gameplan.

One of my Modern UWx Control/Midrange community admins, Niklas Zitrone, summed it up very well:

“This unban will lead to a very clear distinction between UWx Control Decks and UWx Blade/Midrange Decks.”

One of several potential directions we can take these archetypes resembles a Modern evolution of that CawBlade deck Jon Finkel and Brian Kibler played. This is the way I’d approach it:

My version contains a balance of interaction and threats that allows its versatility to weave between different roles and plans depending on the matchup. This version is particularly good against control, Tron, TitanShift, Burn, Jund, Death’s Shadow variants, Dredge, Humans and SFM mirrors.

Peter liked my approach, especially my efforts to improve the Whirza matchup:

“I think you gain a fair amount of equity with a Lyra in your sideboard (because of Restoration Angel). The issue is it’s another card for red, but it’s probably good vs Jund, too. I like the hulk, particularly vs Whirza.”

The Restoration Angel package and Gideon, Ally of Zendikar are a very solid plan B that can adapt to the artifact hate Stoneforge can attract. Cataclysmic Gearhulk is a powerful finisher against Humans, Spirits, creature-heavy Blade variants and Whirza.

I opted for two Supreme Verdicts instead of the split with Wrath of God for the time being because I’ve seen Death’s Shadow begin to rise in popularity. Perhaps un-intuitively I also think it’s a reasonable inclusion in the mirror if your opponent is on Monastery Mentor or Geist of Saint Traft.

Let me walk you through a little more of the thought process that went into my list:

The following are some of the top options to tune and update this list. Use these as additions I suggest that can help you to adapt to the metagame of any upcoming tournament:

The second Stoneblade variant I recommend — especially because of its favourable positioning versus Whirza — utilizes Spell Queller as an additional tempo threat that is extremely disruptive in combo matchups:

This tempo-oriented approach is generally better in a more combo-centric format. Spell Queller can also counter removal against your creatures, walkers and equipment. Stoneforge Mystic works well to divert attention and bait removal away from it, too.

It’s worth noting that Sword of Feast and Famine has some nice synergy with Queller, and should be your sword of choice in a list with more flash creatures. Not only is Queller a good sword wielder, but it’s also very good against Whirza, which is arguably one of the best decks to beat moving forward. The fact that it’s able to counter most of their high impact cards while also establishing pressure, makes Spell Queller an MVP in this matchup.

For further reference on the archetype, prior to Stoneforge being unbanned, Mitchell Forst placed 12th with the Queller version at the StarCityGames Classic Richmond:

After speaking with Mitchell about his experience with the deck, he said he beat three different flavors of Urza and the matchup generally seemed favoured with the addition of Queller.

With Teferi in play, the opponent can’t cast the spell from under Spell Queller when it leaves the battlefield (since Spell Queller’s trigger uses the stack), so you can blink it with Restoration Angel (or bounce it with Teferi/Jace) for a nice soft-lock. The spell it exiled is then permanently exiled.

Spell Queller + Teferi, Time Raveler was a huge step forward for the archetype, and it also happens to conveniently be a great shell for Stoneforge. This deck also allows for some extremely busted nut draws.

Although I’m currently focused on Blue-White Midrange, there are enticing reasons to incorporate black, red or green into the deck. Adding a third colour may provide more power, interaction and versatility. The following are just some of the most notable cards you gain access to:

Whichever flavour you decide to play, it’s important to understand the design fundamentals, strategic elements, and dynamics of playing with (and against) Stoneforge Mystic.

In order to excel with the Blue-White version of the deck, consider the following design guidelines, card options and tips:

1. The three best equipment options to play in the maindeck are Batterskull, Sword of Feast and Famine and Sword of Fire and Ice. Sword of Light and Shadow, Sword of War and Peace, Sword of Sinew and Steel, Sword of Truth and Justice, and Manriki-Gusari are solid equipment tech options in the side.

2. Don’t play more than two swords alongside Batterskull in the main.

5. Narset, Parter of Veils is fine with eight to ten creatures, max. If you’re playing more, consider her in the sideboard instead. She’s very good against opposing Jaces, Twiddle Storm, and generally better when you switch to more of a control plan.

Tip: Play Vendilion Clique in response to opponent activating Stoneforge Mystic’s ability, it will then allow you to push their equipment to the bottom of their deck.

Tip: If you want to bounce Batterksull back to your hand and put it back in play, first activate Stoneforge Mystic, hold priority, then return Batterskull to your hand. This will prevent your opponent from killing your Stoneforge Mystic in response to bouncing Batterskull. You can do the same with Restoration Angel. During mid-combat, you can activate SFM, hold priority, and blink SFM. SFM’s activated ability resolves and surprise! You have Restoration Angel and Batterskull on the field.

Maybe most importantly of any gameplay advice I can give you about Stoneblade is that role assessment is the most valuable skill and strategic component to utilize with Stoneforge Mystic. This midrange deck can quite easily take the controlling or proactive role in any game or matchup, and deciding when to switch gears is going to be a key to your success.

Role assessment (Who’s the Beatdown?) and knowing how/when to pivot to effectively turn the corner are important strategic skills to have, hone and leverage, especially in this format. This skill requires you to be proficient with threat evaluation and situational awareness. Being “in control” doesn’t always mean having to answer everything. There are opportunities where the element of surprise, forcing action and demanding to be answered, can put you in a more commanding and controlling position. Sometimes the best way to control the game is to reduce their life total to zero as fast as possible.

Improving at role assessment first and foremost requires understanding the dynamics and intricacies of a matchup, then determining the best way to approach it based on the way your deck’s gameplan lines up against theirs. Write out your sideboard plans, keep your ratios tight and make sure you’ve always got your approach in the back of your mind. If you’ve decided you’re going to be aggressive with Geist of Saint Traft in the Tron matchup, then take the risk and slam that thin on turn three — it’s time to be the beatdown.

Role assessment is a particularly advanced skill that arguably separates the average players from the good and great ones. And from where I’m sitting honing it merely requires focused work and repetitions.

With that being said, a new, yet familiar, era is upon us. Be patient, proactive, and progressive. It’s time to Forge the future of Azorius in Modern! As always,
Assess and Adapt Azorius Mages.