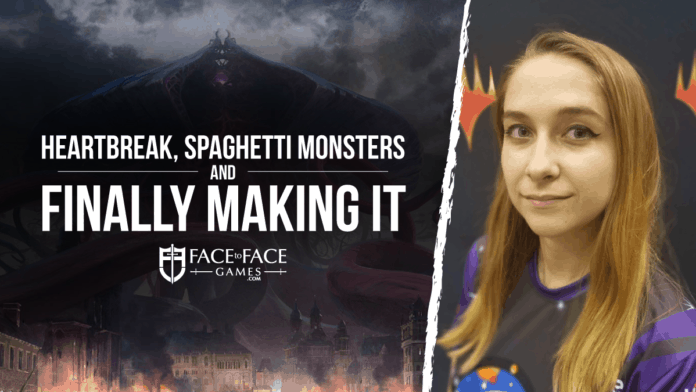 I’ve been making this play a lot these past two weeks.

Both at the SCG Open in Dallas last week and Grand Prix Indianapolis this past weekend. If you have been following me at all as of late, you’re probably familiar with the deck I’ve managed to popularize after the most recent B&R announcement shook the entire Modern format — Selesnya Eldrazi.

Today I want to talk to you about that deck. How it’s developed and how I ended up playing it. But before I get to that, I want to flashback to where this whole story started at SCG Dallas. Week one of “New Modern.” I was completely lost as far as where to start in the format, so naturally I picked up a list from an article and got to work. Ryan Overturf’s Stoneforge-infused Eldrazi deck to be more specific. Little did I know while I was reading that he had never played a single game with the deck.

My testing with the deck was going well, but I had no idea what to expect in the new format. I felt confident in my own preparation, but unsure how much that testing would transfer into a paper event in a wide open format.

I managed to 8-1 Day One in Dallas with a relatively untested deck and chain that into a deep run in day two. My tournament came down to my Top 8 win-and-in which ended up being live streamed.

I knew my round 15 opponent was on Grixis Death’s Shadow, a matchup that I discovered to be fairly even in my own testing. I was nervous, and it only got worse when the cameras turned on. This was the first individual win-and-in I had ever played, and I was scared. I’ve poured my heart into “The Grind” for about a year now, and I’ve felt the continuous pressure to prove myself for months. I wanted to prove that there was a reason people should listen to what I have to say and respect me. I work hard every day to learn and improve at Magic. I take every opportunity to grow from my mistakes and do better next time. This was my event, I could feel it.

I lost. In three games against my Grixis Shadow opponent. I didn’t think it would hit me that hard, but it did. I was heartbroken. I felt like I was finally going to prove myself, I would finally have a Top 8 which would — somehow — mean I’d matter in the Magic world. I know that thinking is flawed, but it was all that was going through my head right after that loss. It wasn’t until later when I finally checked Twitter that I realized how much of an impact I had made over the weekend. Messages, tweets and notifications, filled all of my social media pages. I never thought I would be an inspiration to others, but it quickly became clear that on that day I was, and how important representation was in Magic.

People I’d never met had reached out to tell me their daughters or girlfriends wanted to learn how to play Magic because of me, or wanted to go to their first event. All these people wanted to do these things because they saw someone like them do well in that space. That was incredibly humbling for me, and what eventually pushed me to go to GP Indianapolis the very next weekend.

Before I get into the GP, let me tell you a bit about what the deck I played actually does. Essentially, you want to play games with three different plans in mind:

The Eldrazi Plan: Here we’re focused on casting powerful Eldrazi spells ahead of schedule with the help of Noble Hierarch, Talisman/Mind Stone and Eldrazi Temple. Turn two Thought-Knot Seer still feels like one of the most powerful things you can do in Modern, and that hasn’t really changed since the card was printed.

Eldrazi Displacer has been the best card in my deck over the past two weekends. It synergizes beautifully with your other creatures to create unbeatable board states. Additionally, it happens to be well-positioned in this new creature-dense and tempo focused Modern format. Its ability to tap down your opponent’s creatures and enable a big  attack with your Eldrazi wielding various swords is extremely good in Modern right now. Speaking of swords:

The Stoneforge Plan: This plan obviously plays with powerful equipment you can tutor for depending on the matchup and situation. Why this is specifically powerful in this deck is because of how well your equipment pair with Eldrazi — specifically Reality Smasher. My current equipment selections are Batterskull, Sword of Fire and Ice and Sword of Feast and Famine. The flex spot is likely Sword of Fire and Ice and can be replaced with Sword of Light and Shadow or Sword of Sinew and steel, depending on where the metagame is at. Right now Modern’s still pretty up in the air, so I think Feast and Famine/Fire and Ice have the highest raw power level and that’s why they’re my weapons of choice.

The Karn Plan: Karn, the Great Creator often serves as an alternate win-con by grabbing Mycosynth Lattice out of your sideboard and locking your opponent out. Alternatively, you are also able to grab matchup specific cards from your sideboard, such as a timely game one Damping Sphere against Tron. It’s also a nice maindeck trump for the Whirza deck that has become one of Modern’s winningest decks lately.

What makes this deck so good is these three separate plans. Almost no deck in Modern can beat each axis you attack them on, and in a format as diverse as Modern, that’s a huge advantage.

Headed into GP Indy, I expected Whirza to be the top performing deck, therefore I wanted some extra play in the matchup and added a couple Knight of Autumns to my sideboard. These also happened to help the Burn matchup as well, which was a bonus.

The reason I’ve liked this deck in the new Modern format so much is because of it’s ability to prey on fair decks, and a lot of people have been trying to play fair after Hogaak and Faithless Looting were banned. Originally, I was unsure if I even wanted to go to GP Indy after my devastating loss in Dallas. But, ultimately I decided I was going to go and have a fun time no matter what. I mostly play only on the SCG circuit and hadn’t played in a GP in about a year. With that in mind, I planned to take this event seriously, but the results didn’t feel like they mattered to me as much as on my regular stomping grounds on the SCG Tour.

My teammates and I had began day two at 6-2. I was on Selesnya Eldrazi again, Jonathan Hobbs was on Grixis Shadow and Chad Harney was on Whirza. At 6-2 Top 8 was pretty far from our sights, but you battle on. It was just about stringing some wins together.

A couple rounds and a lot of feature matches later, we realized we were in a fairly good position to Top 4 the GP. I started to get a little nervous — much like just seven days earlier in Dallas — making Top 4 meant I would be qualified for a Mythic Championship. This had never really been on my radar as I’m predominantly an SCG Ginder, and suddenly it was a possibility.

The minute you’ve all been waiting for! A 1-minute deck-tech with Ally Warfield (@ArcticMeebo ) on GW Eldrazi.

Support Magic innovators! Anyone who retweets this will be entered for a chance to win $40 in CFB store credit – the winner will be chosen on Monday!! pic.twitter.com/R5GUvcQdkZ

In Round 13 I played against Burn, and it’s a deciding match for our team. I lose. I immediately feel like I let my teammates down. Of course, you “win and lose as a team”, but I had very much just lost that one for the team. This meant our Round 14 was a “win and hope” instead of a Top 4 lock. We got paired up that round, and I use all my strength to try to put everything out of my mind and stay calm. I played against a fair Orzhov Midrange deck, Hobbes against Valakut and Chad against Tron.

I was slightly concerned about how Tron versus Whirza would play out, so I felt the pressure to have to win my match. The hardest part was pushing my Dallas heartbreak out of my mind in order to focus on match in front of me. I hadn’t been anxious all weekend because I was just there to have fun, but I could feel myself shaking in that last round. Hobbes won his match and shuffled over to help me close out my second game. After casting a Path to Exile on a Yawgmoth and swinging through with some Eldrazi — we won.

At that point we weren’t even locked, but I was overwhelmed with emotions. We sat with some friends until the round was over and anxiously awaited the Top 4 announcement. There were a handful of teams with the same amount of match points as us, but only two could make it in.

After a long 15 minutes past time in the round, the head judge grabbed the microphone to announce the Top 4. The first two teams were locked. Third place wasn’t us and I felt my heart sink. I thought I missed once again and realized just how much I wanted this. How much I wanted the result, the validation, the respect. I wanted to play in a Mythic Championship. I wanted people to look up to me. I wanted to be a Magic player people would remember.

“In 4th place, the team of Chad Harney, Jonathan Hobbes and Ally Warfield.”

I almost fell to the ground crying.

I hugged all of my friends and teammates. All the emotions from Dallas had come back. I finally made it. Everything I had been working for had paid off. After SCG Dallas, I was heartbroken but told myself I’d get there next time. But that’s what we all tell ourselves when we come up short. There’s no telling when.

Little did I know “next time” would mean qualifying for my first Mythic Championship alongside my friends seven days later. Somehow after coming up short I persevered and it paid off. I wouldn’t be where I was in that moment if I quit at every wrong turn or setback.

The amount of love and support from my friends, family, and the community has been overwhelming and humbling. I am so proud of myself, and that is something I’ve struggled with at the table for a while. I am good enough. I deserve respect. Not only did I make the Top 4, but I qualified for an elite tournament that I never thought I would qualify for in my life.

And that’s a feeling you can’t replace.

My bounce back story aside, I guess you probably want an updated deck, right? That’s probably what you came here for. Well, we ended up losing to the eventual GP champs in Top 4 and I took a loss to Burn in that match. That’s a matchup I’d like to address going forward.

Here’s how I’d change things if I had a Modern event this weekend.