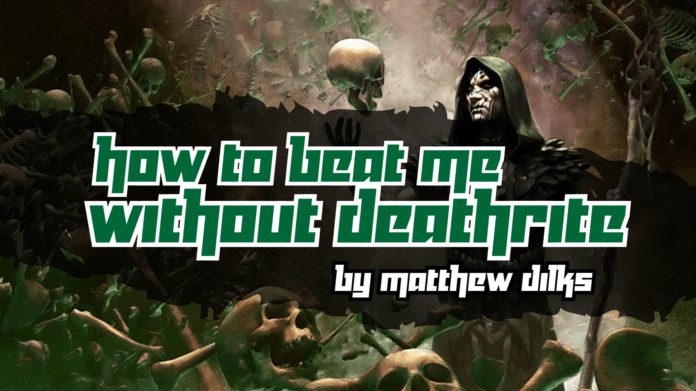 I was planning to write my next article about G/B Depths but it seems they have taken an axe to one of the key reasons to play and talk about that deck— Deathrite Shaman. Now that I’ve scrapped that article let’s go deep on the announcement and what it means for the best format in the world. 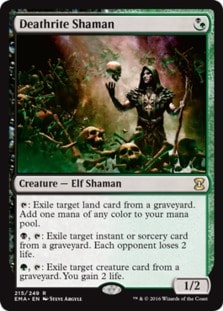 So this banning was pretty clear to be the front-runner as players have been advocating for a ban to help with diversity for about a year now. Ian Duke from Wizards of the Coast’s Research and Development department breaks down the reasons for Deathrite getting banned in more detail here. Basically Deathrite has stifled diversity among the fair blue decks in the format. In addition, Wizards seem to have data that Grixis Delver is above 50% against the field and that is a dominating force.

Almost every deck in the format trying to play fair played Deathrite because you need to keep up with all the other Deathrite decks. The card is just a fulfilling prophecy when it comes to fair Magic in Legacy.

Grixis Delver, 4C Control, Elves, BUG Control, Maverick and G/B Depths are just some of the decks that played Shaman and need to reevaluate how they’re built. This is part of the problem Wizards want to fix — there are just too many Shaman decks and a lot of the blue versions look very similar. I think decks like Elves, Maverick and G/B Depths fall to older builds or can recover with some lower power level cards and largely look the same. The blue Deathrite decks will change much more drastically and move to different versions of Delver or less greedy bigger blue Baleful Strix decks. These decks might look to Noble Hierarch or more redundancy like additional cantrips in Preordain similar to what U/W has done since the Sensei’s Diving Top ban. 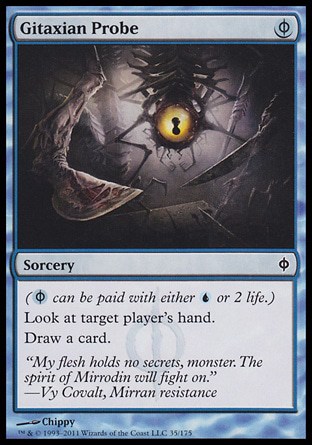 Gitaxian Probe is the card I wanted to see gone more than any other. I felt like it has all the same reasons to be banned as it did when it left modern. This card allowed perfect information, upside with Cabal Therapy and Pyromancer and countless other synergies in Legacy. It gives the player casting Probe full agency to set the pace of the game. Blue Legacy decks already have so much control over what cards they draw that giving them perfect information to sculpt their draws more is just egregious. This card simply is not fun to play with or against, puts an end to fun counter-play of bluffing or representing cards over multiple turns to create a narrative where you have a subset of cards.

Decks that maximized the Probe plus Cabal Therapy interaction like Grixis Delver and Storm get hurt the most by this change. Cabal Therapy becomes a skill-testing card not just Thoughtseize that some time takes multiple cards.

Where the format goes from here

Temur Delver AKA RUG AKA Canadian Threshold is back to being the king Delver deck. Deathrite Shaman has taken out of both lead competitors BUG delver and Grixis Delver to make RUG the best option for Delver players. In addition, people love this deck there is so much nostalgia from year ago where this deck was the best tempo deck in the format and people are itching to let the goose loose again. A small counter-point is that mana bases have a chance of becoming much cleaner — you can’t lean on Deathrite to help you get more out of your mana. Wasteland plus Stifle might not be as insane as it seems at first glance but Temur is good starting point.

Combo decks also have a chance to come back in a big way. I think for a long time in Legacy combo decks have been close to unplayable, the Deathrite blue decks were just such awful matchups either because they’d either hymn you into dust or doing the “clock you with delver counter all your spells” plan. Decks like Sneak and Show specifically had very poor Grixis Delver matchups and now don’t have to play through Probe plus Therapy in addition to soft counter magic plus clock.

Stoneforge Mystic is also back, I think this card was completely unplayable before this ban, with the only exception being Death and Taxes. Equipment is not what you want your blue deck to lean-on when the other blue decks have a bunch of Kolaghan’s Commands and Snapcaster Mages. Slower blue decks with True-Name Nemesis and Stoneforge are poised for a comeback, getting to play a lot of basics and a giant lifelink creature in Batterskull to race Nimble Mongoose.

What I’m gonna do

I think I have a couple options for what I should do. First I could keep my head down and keep playing Lands. I think the format moves very slowly and it’s not like players who own the Grixis or 4C decks are going to buy into Sneak and Show or Reanimator if they didn’t already own the cards. So even though I think the metagame is ripe for a combo resurgence I don’t think a large percentage of players will choose to switch decks. The main difference I see for Lands is playing more Rishadan Ports over Ghost Quarter. It’s hard to fully predict how Lands will be affected until we see a couple big events. I would definitely expect way less Diabolic Edicts and that makes me want to revisit my favourite card — Tireless Tracker.

My second option might just be Infect. The secret best tempo deck that was kept down by the presence of Grixis Delver and 4C Control is Infect. I love this deck but it simply was not as good as Grixis Delver and didn’t have a good matchup against it. You get to maximize the power of Noble Hierarch in this deck, Noble gained a lot from Deathrite leaving the format. You get access to all the same tools RUG delver does against most decks but specifically combo because you can punish so much harder with a fast combo finish yourself.

Grixis Delver and 4C Control have been on top since the banning of Sensei’s Sivining Top. Guess what? Miracles didn’t go away with that ban either. Players figured out a new way to build it and developed the deck to be a large player in the metagame. 4C Control is likely done and the decks it will turn into will look drastically different then how it did. I think a Turbo Gurmag version of Grixis or BUG Delver with Thought Scour could still be a reasonable contender in the format. You just can’t sleep on decks that were that dominant even if they lose some cards.

All in all I’m very happy with these changes and look forward to testing leading up the team opens I plan on playing Legacy for my team.