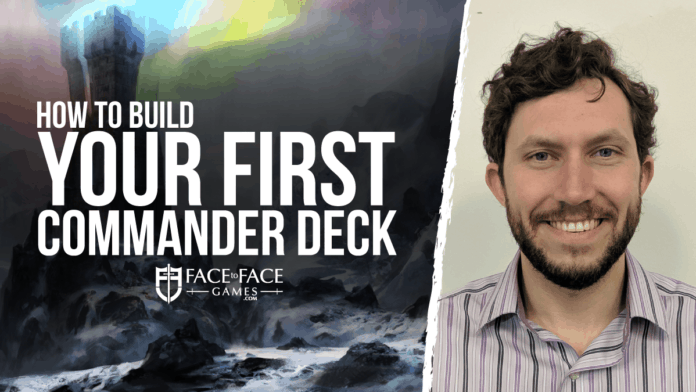 So you want to make a Commander deck?

Whether you’re an experienced deck builder or this is your first time, I’m sure there will be an aspect of this guide that helps you make better decks in the future. For ease, this article is split into sections, but is best read from start to end.

Before we get into building a list, a good first step is to determine your play style. A good framework is to use player type (defined by R&D) and power level (portrayed by The Command Zone). Understanding these elements will help us build a deck that we want to play.

Colloquially there are three player types that can impact play style: Timmy/Tammy, Johnny/Jenny and Spike. Hybrids of player types are very common, and they are fluid — it’s possible you may have started out as a Spike but have found more joy in just playing and could now be considered a Jenny. I see myself as a Timmy/Johnny, I love building decks, and I love to win in big splashy ways (usually fueled by absurd “janky” combos).

A while back The Command Zone podcast released an episode on power level, which I’ve summarized below. Finding the power level you like to play at will impact card selection and who you choose to play with. Its best when everyone at a table has a similarly powered deck, and you’ll often encounter others who may ask what power level everyone’s playing at.

Determining what you want your deck to do is arguably the most important and hardest part of building a deck. Some would argue that you should start with the Commander first, but I find starting with a theme gives me more flexibility.

The best way to determine the theme of your deck is to think of the most fun you’ve had playing Magic. What were you doing at that time?  Another good starting point can be specific cards, are there tribes you like? Do you like certain card types (instants, counterspells, draw effects etc.)? If you’re still stumped, you can try mashing up two or more things.

Here are some prompts to get the brain juices flowing:

With no Commander yet, we’re still open to build in any direction. Your next step should be determining the colours. It’s best to start with colours you know you like, but if you’re unsure, you can use the quick summary below as a guide.

Now that we have your theme and colours sorted, it’s time to select who will be at the helm of your deck. The easiest way is to look for your theme in your colours among Legendary Creatures (card types that can be used in advanced searches). If you’re in three or four colours, the Partner commanders released in Commander 2016 can give you a lot of flexibility in terms of getting your colours and on-theme effects.

Now for the most fun part — picking the cards that will make your deck. The first thing we want to do is set aside slots for lands. The commonly accepted norm is 37 lands, but I like to modify this based on the average converted-mana-cost (CMC) of my playables. For the time being, let’s set aside 37 for lands and one for your Commander leaving 62 slots. Before we get to selecting cards, I’m going to introduce a template from The Command Zone and offer some tweaks.

The above is a good starting point, but I like to adjust the numbers based on my playstyle and deck theme. I really want to hit my draw and ramp effects, so I try to get these up to 15. But why 15? Given that drawing cards in Magic falls under hypergeometric probability (for more on this check out Frank Karsten’s articles and this tool), 15 “successes” gives us a 69 percent chance of having one of those cards in your opening hand. I like to downshift the number of wraths and on occasion will reduce the number of single target removal.

Now you may say, “that’s 38 of my 62 cards!” How am I supposed to build a fun, thematic deck with 24 cards? This is where the creative deck building comes in. The best way to hit this template and stay on theme is to have cards that do two or more things. Is there a card that’s on theme and draws a card or acts as targeted removal? What about lands that ramp? These cards exist, and they’re easier to find than one may initially think.

Some great universal ramp spells include:

While we aren’t working on your mana base yet, we can start by including some cards that will hit your deck’s needs. Three groups of lands you should always consider in a Commander deck are the Scry lands, Bounce lands and Cycling lands.  The Scry and Cycling lands help pad your draw number (although most would argue a Scry isn’t as valuable as a draw, I’m a fan of this being close enough for my casual decks). The Bounce lands tap for two different colored mana, but you need to return a land to hand when it enters play. This is usually fine in Commander and can pay off after being in play a few turns (be careful though as some players may remove these). Depending on the number of colours in your deck, you’ll be able to play more of these, but will have to deal with trickier mana.

Keeping these constraints in mind, now we can get to the good stuff — filling the 99. I usually use a deck editor website to track the cards I want to include, with my personal favourite being TappedOut. Then we start searching. Once we’ve done a thorough sweep of your card database of choice, we should take a peak at EDHREC to see what cards others are using. Feel free to start with EDHREC, but I find part of the fun is putting the cards together and letting the deck build upon itself. You may find that you have more than 62 cards from this searching, this is totally normal and the next step is to whittle the list down. I start by determining which cards are must haves either for theme or hitting my template needs. This part can take some time as there may be some tough choices, but you can start with a V1 and tweak it as you play it, it doesn’t need to be perfect at the start.

Fine-Tuning Your Mana Base

Now that we have your ~62 cards and a few lands picked out we can start to pull your mana base together. If you’ve made a mono-colour deck, jam in some basics and utility lands (i.e. Reliquary Tower) and you’re good to go, otherwise read on. The approach outlined here is not budget friendly, but it’s also not a no-budget approach. I personally like to have consistent mana so I don’t need to worry about hitting my colours and can focus on playing, taking a budget approach to mana bases just means that you’ll have less consistency hitting your colours and it may (in rare cases) prevent you from casting cards on curve. If you’re interested in building your mana base on a budget I’d recommend checking out The Professor’s videos on the subject.

The first place we’ll start is with the number of lands we should play. Now that we have the cards we’re going to play we can calculate the average CMC of your deck, we’ll use this in a formula created by Frank Karsten. Since his initial formula was built for 60 card decks, I’ve tweaked it slightly to work for 99 (the 27 is 16 for a 60 card deck).

Next up is coloured sources. Frank has already done the math for us, and I’ve collapsed his findings into a quick number of sources lookup table below.

So how do we make these numbers make sense? Well we need to think of your theme, and if there are any critical cards we need to cast. Maybe we need to be sure that we can cast [Hardened Scales] on turn 1 (C x Turn one) or a Cathars’ Crusade on turn five (3CC x Turn five). The above table would suggest we need a minimum of 23 green sources and a minimum of 23 white sources.

After we have your targets we need to start picking the lands that go in. The first place to start is with any lands that can produce multiple colours like Command Tower, Evolving Wilds, Terramorphic Expanse and Prismatic Vista are excellent auto-includes. If budget allows, fetch lands such as Wooded Foothills can help with fixing by searching out Shock lands, Battle lands, and the Dual-colored Cycling lands (Amonkhet). Reflecting Pool, Exotic Orchard and Forbidden Orchard can help produce most colours (Exotic Orchard depends on other decks at the table, so it’s better if you’re playing green/blue and worse if you’re playing red/white). City of Brass, Mana Confluence and Grand Coliseum can produce any color at the cost of life. Then depending on your theme, you may be able to leverage Path of Ancestry, Pillar of the Paruns, Ancient Ziggurat, Unclaimed Territory or Cavern of Souls. Beyond these options there are some very narrow lands that support specific tribes, so it’s worth revisiting if you’re building a tribal deck.

With the above and some more searching you should be able to pull together enough coloured sources to consistently cast your cards. With a well structured manabase, and some ramp to smooth out fixing, you should be able to cast your cards on curve consistently. I find it hard to get to the specific targets outlined in the table above, so I try to get to a minimum of 23 for each coloured source so I can reliably hit at least one source in my opening hand.

From figuring out your play style to building a strong mana base, you should have all the tools you need to craft a Commander deck. Feel free to leave your thoughts in the comments below. Until next time, happy shuffling.