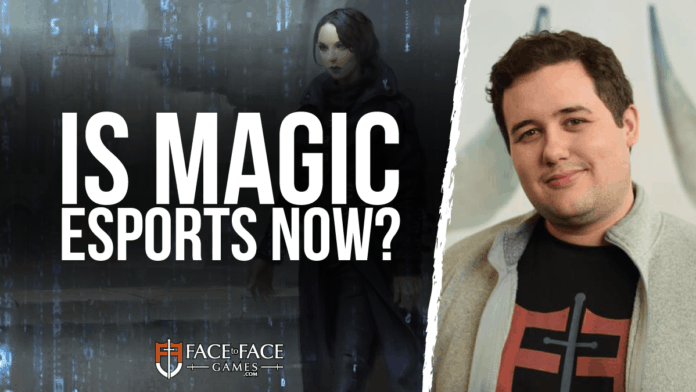 Years before I took Magic seriously, I was so deep into competitive Starcraft that when I moved to rural New Brunswick for university, I put together a collegiate team out of anyone who would play with me. The moment I had a computer with a reliable internet connection as a child, I was grinding third-rate browser games like Tribal Wars and Utopia. Hell, I’m so into competitive gaming that if you delve into my old tweets, you won’t find slurs and problematic language, but rather embarrassing post after embarrassing post about ESPORTS, in all caps, as was the style back in the day. It was not, in fact, the style. I was just an even bigger dweeb than I am now.

I’ve also been pretty consistently critical of Wizards of the Coast’s organized play offerings, going so far as to write about how trying to push Magic as an esport last year was a huge error. I told them off for trying top-heavy prize structures for the sake of publicity so long as they were investing pennies on the dollar compared to their competitors in the field. I figured that they would never have the appropriate budget, and that going down this path without competitive prize purses would be a disaster for the competitive ecosystem.

Last night, amidst the heinous onanism of The Game Awards, tucked in between ads for Disney Battle Royale and the new season of Stranger Things (with added racism, to appeal to gamers), Wizards had the cajones to go out there and prove me wrong.

A ten million dollar investment into pro Magic, one of the biggest and oldest competitive games around, forces it into the spotlight. Alongside the skyrocketing popularity of Arena, which blossomed into an excellent program both to play and to watch over the course of its development, the future of Magic as an esport has never been brighter.

Of course, you wouldn’t arrive at this conclusion based on the reactions of the competitive scene, who have had a myriad of responses, from outraged to ecstatic, all of which are valid conclusions to reach from the information we were presented with today. See, Wizards has continued to deliver announcements at a snail’s pace, always painting an incomplete picture of the future of the game — something that’s truly frustrating for enfranchised players. Sure, we know that there’s now loosely infinite money in pro Magic. We know where the majority of that money is allocated, loosely speaking. What can we infer from this? Luckily, I’m here to parse the nitty gritty details of this messy announcement for you!

First off, unless you’re a Silver or Gold pro, the structure of competitive paper Magic will remain much the same for the time being, minus the incentive to grind pro points for the occasional bonus invite. There are still Grand Prix at MagicFests, presumably the top finishers from those will join PTQ winners at the rebranded Pro Tour. That means that unless you belong to the spectrum of Silver, Gold and low-point Platinum players, that the end of the Pro Players’ Club will have no impact on you, and the system will remain the same as it was. If you had Pro Club benefits under the old system, but didn’t get an invite to the salaried Magic Pro League, then you’re taking a big fat L unless the hinted-at challenger system is worth anything other than a shot at that coveted Pro League slot.

What everyone gets here, however, is the introduction of a huge Magic Arena competitive infrastructure, none of which has been revealed as of yet, much to my disappointment. This was the real meat of the announcement, and to leave us in the dark as to the path forward that we’re supposed to take as players is honestly rather upsetting. I want to know if there are avenues of qualification that are reasonable for the displaced hordes of pro point grinders — we who are the only demographic actually hurt by the changes to the paper ecosystem. Given that esports events tend towards the smaller side for logistical reasons, I can assume that the Arena Mythic Championships will trend towards featuring the Pro League alongside a small number of qualified players and special invites a la Amaz. This would be a disaster for the hundreds of deeply invested grinders left out to dry on the ruins of the Pro Club.

The end of the Nationals and World Magic Cup programs is also a disappointment. As one of the lucky few to play the WMC, I’m sad that I’ll never be able to make it back to that unique and fun tournament. That said, I completely understand the decision on their end. I’m sure the viewership wasn’t great, and it doesn’t fit into their marketing strategy for Arena esports — and it’s important to remember that while it might be a whole lot more to us, it is in the end just marketing.

This is pretty much where the negativity ends from me. I think we’re going to see a lot of cascading benefits from this huge investment into specifically Arena esports. By drawing this much attention to Arena, a quality piece of free-to-play software, new players are given a smooth introduction into the competitive scene, drawn in by the massive prize pool. Remember, Hearthstone is old news, Artifact costs money and you can’t play Shadowverse for too long without a visit from the FBI. You just can’t mess with Magic — it’s the best card game out there, and it finally has a digital implementation and a prize purse worthy of its legacy.

There’s another hidden upside to the imminent explosion in the Arena playerbase: the rebirth of the oft-maligned Standard format. While those of us who live on Magic Online might be insulated to this, the rest of the Magic-playing world has avoided Standard like the plague ever since the disastrous rash of bannings of 2017. Outside of poorly-attended Grand Prix and PPTQs, Standard had thoroughly died over the course of the past two years, with both the SCG circuit and the FacetoFaceGames.com Open Series completely dropping support. The format post-Guilds of Ravnica has been a lot of fun to play, and from what I’ve heard, more casual players experiencing it through Arena have been having a great time. Remember that Standard is one of the most affordable competitive formats, and Arena is definitely a pipeline to FNM and competitive paper Magic for new players who might have the itch for something more than an online ladder.

A healthy Standard playerbase isn’t only good for Magic, it’s also great for the LGS scene. Having to rely on volatile eternal card markets and players frustrated by the low value of new set releases due to the lack of popularity of Standard has been a problem for less well-established card shops. A rise in Standard attendance can only be a positive thing for Magic’s ecosystem as a whole.

So I’m choosing to be optimistic. Despite being one of the players ostensibly hurt by the death of the Pro Club, I see a bright future on the Arena side of things, and given that my Standard win-rate is particularly stellar, I’m selfishly, but also generally, looking forward to the future of this great game. In fact, I’ll be streaming Arena Standard quite seriously starting next week on twitch.tv/tirentu! Now if only they’ll learn how to fully communicate information and make announcements that aren’t just setting up future announcements.

Bonus content for my beloved readers: here’s the Spirits deck I’m playing this weekend with a 15-deck sideboard guide!