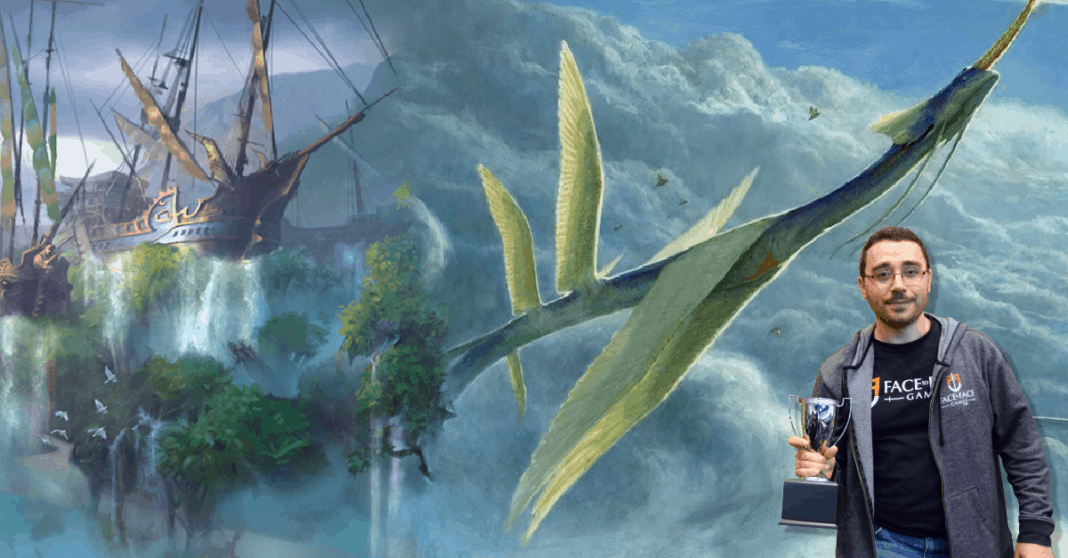 The landscape of Modern has changed dramatically with Ikoria hitting the digital world. So much so, we may see bannings to help moderate the powerful mechanic that is Companion.

The two big standout companions have been Lurrus of the Dream-Den and Yorion, Sky Nomad. This has caused Modern to almost resemble Legacy with a flurry of Delver of Secret type decks. Which has also caused a burst in the popularity of Burn. On the flipside we have the newer bigger midrange meta. Yorion has allowed for a consistent big drop and a revitalization of the spells that have come before it.

For competitive magic there’s typically a balance to any healthy format. There’s All-In Aggro, Mid-Range, Control, and Combo. Typically, Mid-Range is meant to keep the Aggro decks in check while getting chewed up by Control. Combo comes in as an X-Factor that trumps Mid-Range typically, sometimes fares well against Control, but can be weak to Aggro.

Now that we see a large rise in the Mid-Range as the race to stop Burn increases in the meta. We look to see how we can one up everyone else that is on the same level. I wrote about the power of Scapeshift awhile back shortly before Companions hit the mean streets. Scapeshift utilizes cards in the deck to function as a one-card win condition. The limiting factor was that you needed sufficient Mountains in the deck to use with Valakut the Molten Pinnacle. That’s where Yorion comes in, the 80-card builds make this much simpler.

For those that haven’t had the pleasure of pulling off a Scapeshift win. Let me give a simple explanation. Scapeshift allows you to select all your lands. You then search your library for one or two copies of Valakut the Molten Pinnacle and at least six Mountains. For each copy of Valakut that is grabbed it deals three damage per mountain put into play simultaneously.

Scapeshift is a sacrifice upon resolution spell. Meaning you do not lose anything if you try and fail. Someone can disrupt the number of Mountains you have in play and the having five other Mountains clause does indeed check upon resolution a second time. Luckily there aren’t many people playing Boomerang anymore and Cryptic Command probably would have been used on the Scapeshift itself.

Many pros have been posting their decklists to Twitter and even though Edgar Magalhaes wasn’t the first to come up with the idea. His list appealed to me the most. As he put it, how many bad cards can Yorion make up for? To me his list ran the least number of bad cards. Let me share the list and we can go into the weeds.

It’s immediately funny to me that decks like these run more lands than the Legacy lands deck would sometimes play. This is of course important because the deck wants to optimize getting to the seven-land base requirement of utilizing Scapeshift.

The Arcum’s Astrolabes, Abundant Growths, and Ice-Fang Coatls are all cheap effective cantrips that increase the power level of Yorion. Cards like Remand and Cryptic Command are sufficient disruption typically as you race to win with a big Scapeshift.

When you’re playing with 80 cards a 15-card sideboard becomes less effective. The odds of drawing a card with only a couple copies goes so far down that additional copies become necessary. The compensation for this is to ditch certain sideboard hate for some matchups and focus primarily on the other matchups that we can affect.

Looking at Edgar’s sideboard it seems that he is prepared to encounter Burn and counter-magic, mostly ignoring the rest of the very large diverse field that is Modern. Thankfully many of these cards are versatile enough to come in against some of the other matchups. Veil of Summer for instance is also effective against Black disruption decks like Jund.

The Flame Slash is definitely the spell that has me the most confused and my best guess is it’s just a free flex spot. The one copy is inconsistent enough that it will very infrequently come up anyway. The only cards in the sideboard not printed in the last year are the Flame Slash and Anger of the Gods interestingly enough. In the main deck we have 24 copies of cards also printed in the last year. For those keeping track that’s over 1/3rd of a 95-card deck that are all new.

One of the things that I think makes this deck even better is the printing of Ketria Triome. The fact that it counts as a mountain and produces all the colors of the deck, can cycle in the late game if you’re flooding out and can be searched out with a fetch land makes this a powerful addition. There are only 11 Mountains in the deck and you’ll need around 5 Mountains to remain in the deck when you resolve a Scapeshift. Definitely keep that in mind as you’re using your fetch lands.

I’m somewhat surprised to not see any Snapcaster Mages in the build. I think it’s easily a powerful addition to the deck for presenting a third approach. Lightning Bolt, Snapcaster Mage, Flashback Lightning Bolt was a common play in old Modern and I can easily see it being effective here again. Yorion also allows for Snapcaster to be somewhat reusable.

Some corner case plays I can see that you should be aware of include using Cryptic Command to return Yorion to your hand. This allows you to draw many extra cards if you have the right board presence. I can see wanting a Bojuka Bog and Field of the Dead somewhere in the 95 to provide additional leverage with your Scapeshifts. This may not become important until this deck catches on further however. There’s always the common Uroza play of using Mystic Sanctuary + Cryptic Command + the additional draw of Uro to keep countering or tapping continually.
I would rate the power level of this deck at around a 9 out of 10. Also, that its ease of play is much lower than the average Modern deck. I would recommend it for any meta that consisted of a heavy amount of Tron, Control, or even Prowess. Traditional Burn decks can present a problem however and anyone that wants to can easily hate this deck out after sideboarding. Luckily it’s fresh and new and currently outside of the meta.

That’s all for now, thanks for reading as always. See you next week!