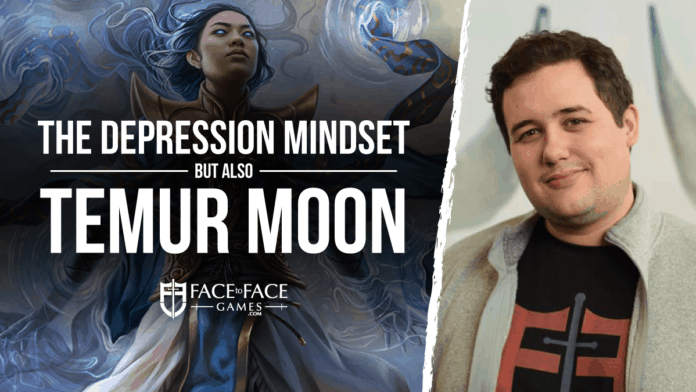 You might not have noticed, but I’ve been writing very little lately. I’ve had a lot on my mind, and a lot of ideas that I’d love to put to the proverbial pen and paper, and yet every time I sit down and try to jam, nothing happens. Unfortunately, this same mindset has been plaguing my MC Barcelona preparation. Once upon a time, I could play a dozen leagues in a day and just feel excited to continue iterating, but that flame is gone. I tire after a mere ten matches, and while I feel like my gameplay and theory-crafting is as sharp as ever, I just can’t get the reps in.

I’ve taken note of this trend over the past few months, and tried a bit of an experiment at GP Detroit last weekend: I didn’t prepare. I played my way through a draft on Arena to take a look at the cards, and kind of paid attention during the spoiler season, but otherwise, I just focused on other areas of my life. You see, I’ve been getting really into strength training at the gym. It works wonders on my depressive mindset to actually get something out of hard work, while the crap shoot that is competitive Magic and its future, well, isn’t so reliable of an endorphin rush. Instead of spending my week grinding meaningless matches away at a Limited format I knew I’d only play once, I worked on my form. I learned how to apply leg drive to my stalled-out bench press, and felt great later that afternoon on the road to Detroit with my friends. Then I finished tenth at the Grand Prix on the back of my solid fundamentals — so long as you ignore the moment in Round 8 where I chump attacked for no reason. Unfortunately, squatting heavy doesn’t help me read my opponents’ cards.

Once upon a time, I would’ve beaten myself up over that mistake. I’d take it back home with me, dwell on it until the next tournament, until I redeemed myself with a better finish. Now, however, for the first time, I don’t care. I’m free from the yoke of these self-imposed expectations. I just want to play Magic on my own terms, compete with what I find fun, and only play the tournaments that would be enjoyable to play. For the first time in my Magic career, I played an entire Grand Prix without feeling sad, upset, or emotionally drained. I mean, I wasn’t happy to take my third loss late in the event, but I’ve been there before and know what to expect. You know what? I played the best Magic — the chump attack notwithstanding — that I’ve played in ages. This is my first time ever beating out my depression, and I’m gonna chase this feeling wherever it takes me.

Yes, this is a long-winded justification for my registering Temur Moon in Barcelona. No, you can’t stop me. Every time you try, I’ll add a Torrential Gearhulk to the list.

With Hogaak mostly neutered, the format should slow down ever so slightly. Decks on the rise include Eldrazi Tron and Wrenn and Six Jund, both of which are not fans of a consistent Turn 3 Blood Moon. Blue Moon gets a lot of new toys from Modern Horizons: Ice-Fang Coatl encourages you to play a bunch of basics, which we’d love to do already, and Arcum’s Astrolabe is only a slight downgrade from a normal cantrip, while fixing the sometimes-awkward mana under Moon. Prismatic Vista helps us easily take on Temur colours, and alongside the recent power-ups to blue in Modern in the form of Narset, Parter of Veils and Force of Negation, this much-maligned strategy has legs all of a sudden.

Ice-Fang Coatl is definitely the lynchpin of this deck. It is the most powerful new addition and is worth stretching the mana of a Blood Moon deck. This Baleful Strix impersonator hasn’t seen much play in the format so far, so we’ll have to take a look at Legacy to see what kind of matchups this flying snake will impact. Unfortunately, there are no Delver of Secrets in this format for it to block, but its Moat-effect against decks like Humans and Eldrazi seems very relevant in a post-Bridge from Below Modern.

I’m not gonna lie, this list is far from extensively tested, but my years of experience with similar strategies should pay dividends in getting it to a reasonable place. It’s extremely hard to test Modern online these days, since the moment you take a loss in a league, you’re consigned to the Merfolk bracket to rot for the rest of your days. Also, in case you skimmed past the first few paragraphs of this article, I have no interest in grinding out meaningless matches online against people incomprehensibly screaming racial slurs whenever they miss a land-drop, and I don’t feel any obligation to subject myself to that nonsense anymore! Ahh, the sweet taste of freedom.

That said, I’m entirely unsure about the inclusion of Remand in this deck. It shouldn’t be too hard to cut it for a mix of Mana Leak, Logic Knot and maybe a Force of Negation and a Spell Snare or something. Ever since the Splinter Twin ban, a day that will live in infamy, Remand really just hasn’t been of an appropriate power level for the increased speed of the Modern format. It is, however, at its best curving into Blood Moon, or being a Time Walk under a Blood Moon, so if there was ever a time to try and make it work, it’s this one.

You’re gonna have a really easy time with Thing in the Ice, whose trigger seems actively detrimental, but multiple Phoenixes and Aria of Flame can pose a significant problem for our non-white reactive deck. Hopefully Leylines and the maindeck Surgical are enough to deal with Phoenix, while we’ll have to rely on countermagic, Narset and the single Engineered Explosives to try and stop ourselves from dying to Aria.

There are two big things going on here: we’re oddly soft to Chalice thanks to our eight cantrips, but very powerful against everything else they have going on, thanks to Ice-Fang Coatl crushing their creatures and Blood Moon being very strong in the matchup. Lightning Bolt doesn’t kill very much here, so it can go in favour of more interaction.

To be entirely truthful, I’m mostly interested in playing Temur Moon so that I can play a beautiful, fair match against UW. Two players, both with counterspells, vying for card advantage. Ah, Magic as it was intended to be played.

If they have no fliers in play, Firespout can be cast without the green mana to let your Ice-Fang Coatl survive. Think of the value!

Stop playing this horrible deck and register Burn like an adult.

More Magic as it was intended to be played. All of our x-1s that are soft to Wrenn and Six should get us a card before they die, so it’s not all that big a deal.

I honestly don’t really know what to do in this matchup. Their deck is too new, and so is mine. This is my best guess.

I’d imagine this to be the easiest matchup in the history of the game. It’s like playing Czech Pile against Legacy Infect, but they don’t even get to have Berserk in their deck.