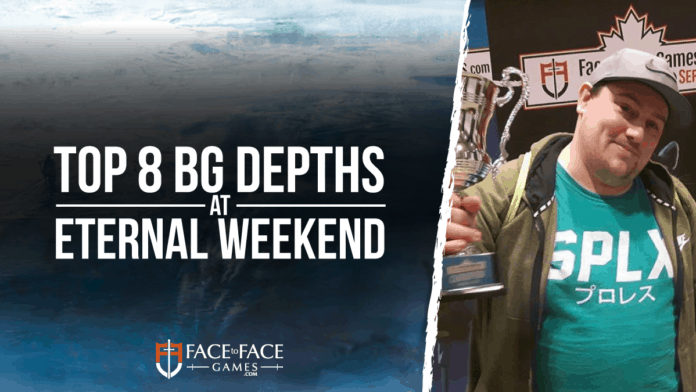 So I guess I called my own shot at Eternal Weekend.

I was very high on my B/G Depths deck headed into the Legacy Champs and I was rewarded for my preparation with a Top 8 appearance.

Let me tell you how the weekend went down.

It kicked off with Vintage which  I decided to skip in favor of just enjoying my day without grinding or working. I slept in and took advantage of the hotel pool before walking into the convention center early Friday afternoon  to meet up with the rest of my friends. I toiled with joining a grinder just to jam games having already won byes for the event previously. Ultimately, I decided not to and just got some good food and good hangs before heading to bed.

The are very few differences from the list I wrote about in my last article: I felt like I wanted the fifth one mana discard spell deck just to make sure I had interaction. The best curves in this deck starts with a turn one discard spell to break up your opponents draw and craft your gameplan. For this reason I added a copy of Inquisition of Kozilek to the deck.

In the sideboard I added a second copy of Liliana, the Last Hope for the fair decks and a Surgical Extraction for the unfair ones. Rite of Consumption is a good card against Swords to Plowshares/Karakas decks that don’t also have Force of Will like Maverick and Death & Taxes. I decided to forgo Rite because I felt like those decks just weren’t going to be popular and my gambit payed off.

Honestly, I haven’t really crunched the numbers on 27 lands, but it didn’t bite me too badly. Its possible four Mox Diamond is too many once you go this low but I wasn’t willing to commit to cutting one the night before.

The day kicked off with my two byes, so I got to sleep in again and roll into the event with a little extra rest. I didn’t sleep well the night before, so the extra two hours of rest was necessary. I picked up a quick win over my first U/W Miracles opponent where the games went as planned with an unchecked Dark Confidant and fast to get me on the board at 3-0. I ended up losing the fourth to TES Storm where I die on turn two Game 1 and lose Game 2 after multiple Thoughtseizes and a Hymn to Tourach. Sucks to pick up an early loss in event with basically no room to give but I executed my gameplan and just didn’t get there.

Then I rallied back in Round 5, and I believe in Round 6 of the event I get deck-checked after picking up the first game against U/W Delver. I submitted my deck by email so I wasn’t too concerned, because I remember counting multiple times. The check takes a long time and they end up calling me over into the judge area. They tell me my second submission of my list only has 12 sideboard cards and I’m given the ultimatum of a game loss and I play my first submission, or no infraction and I play 12 sideboard cards for the rest of the event. I was technically mid-match, so I didn’t think of checking my phone to see what I submitted, I would have lost my Bitterblossoms and Assassin’s Trophy if I were to chose to continue like this. I decided it wasn’t worth risking a game loss because if I lost Game 3 my Top 8 hopes would be dead anyway. I ended up winning the second game anyway, though still frustrated at the disadvantage I now had for the rest of the event. I decided for sanity I need to check the email I sent, I see that my submission is correct, and I submitted what was in my deckbox. I head over to the main stage to see if I can have it corrected and luckily, I did. My warnings are gone and I have full 15 sideboard cards for the rest of the event. A quick scare but we were back on track.

The rest of the day I spent winning my rounds not really sure what the matchups were in hindsight. Round 8 I believe I get another deck check against an unorthodox burn deck splashing green for pump spells and Akroan Crusader. This ends up being another long one because my opponent had some marked foils. I lose Game 1 but my deck is favored against Burn, they have no way of removing a Marit Lage and you can make them discard or remove an Ensnaring Bridge with Abrupt Decay. My last round of Day 1 I won a match in three games against a Goblins opponent. Nine of the 11 rounds in the books and I’m 8-1 looking to win and draw in the morning.

The final day kicked off with an easy win over U/R Delver, the deck has very little interaction for what I’m trying to do. Suddenly, I’m looking for the draw in the last round to lock up the Top 8. I was lucky enough to be paired up to the last undefeated player and gladly accepted the draw. I ended up as the third seed in the Top 8 earning me the play. Before they could run the Legacy Top 8 they needed to cover the Vintage Top 8. So I spent most of the down time grabbing a quick meal and hanging out in the VIP area watching the Vintage Top 8 play out. I didn’t feel a need to figure out my matchup because we would receive deck lists when it started so I could figure out my plan once I knew what my opponent was working with.

I ended up being playing against U/W Miracles, a matchup that is pretty close but I’m very comfortable with. Game 1 starts out with a turn one Dark Confidant that gets Force of Willed and my opponent follows up by resolving a Jace, the Mind Sculptor that I can’t beat. I could have taken it with a [Card]Thoughtsieze earlier on, but I chose to take Snapcaster Mage. At that point I was hoping to force him to have to pitch the Jace to his Force of Will but it didn’t work out. I was close to running my opponent out of white sources but ran out of time before losing to Jace’s ultimate. I drew a bunch of additional copies of Dark Depths and Abrupt Decays that are okay in the matchup but bad when you’re facing down Jace.

Game 2 I executed as planned, running my opponent out of interaction and winning with Bitterblossom and Choke. These problem permanents are a key part of many of the post-board plans for this deck and it paid off here where it mattered most.

Game 3 I kept a land-heavy hand with no Depths but some good cards in the matchup like as Dark Confidant. I ended up behind against a blind Counterbalance flip but remove all my opponents Swords to Plowshares with Surgical Extraction to keep them off balance. That said, I ended up not seeing any copies of Dark Depths and got destroyed by a Jace once again.

That’s where my run came to an end, but it was a great event overall.

It’s hard to say if the extended break between Swiss and Top 8 ended up affecting my play. I would have preferred to not wait that long but it was the trade-off to not play a million rounds the first day. Either way I’m very pleased with my finish and put a lot of work into my deck to find a nice way to exploit the metagame and do something powerful every round.

At this point I wouldn’t change anything in my list. Everything feels great having jammed some games online this week and I still believe the deck is very well positioned.

Depths attacks the format in a very unique way. Your deck does some inherently broken things, cheating on mana and killing your opponents on Turn 2. But, your ability to shift gears, play disruptively and offer a variety of threats that are hard for fair decks to deal with allow you to fight on an axis that other combo decks simply can’t. In that way it operates kind of like the old Splinter Twin Modern decks when you need it to.

Legacy Champs is the event I look forward to every year. There’s been a lot said about the shortcomings of its prize structure, but it’s still a long weekend of playing the best format with my buds that don’t go to every event but make time for this event every year.

Pittsburgh has been great the last two years and I would be happy to return  again. I look forward to next year and hope to compete in both events.