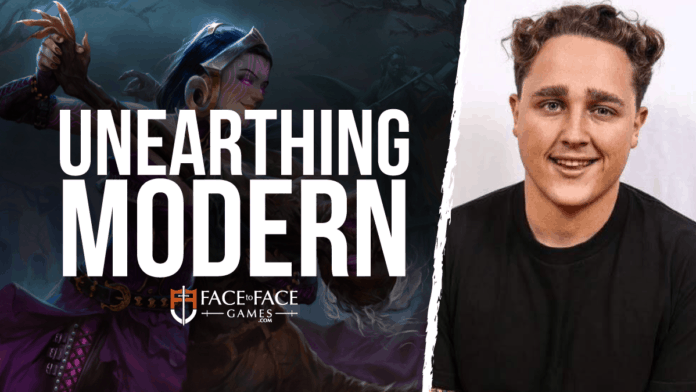 “Hogaak?” I ask my noticeably unimpressed Jund opponent as I look to add power five through 13 to my side of the board on the game’s second turn. It’s Sunday June 30 and I’m playing the Modern Classic at the StarcityGames Open in Pittsburgh, Pennsylvania. This weekend I was ecstatic to find out that Dragon Sleeve now makes a matte faced product and Jeff Swaluk and I drank a couple Topo Chico soda waters. I’m ahead on board.

This format is the wild west.

As you may already have guessed, a couple weeks back I played the Hogaak Bridgevine deck that has been running roughshod over the Modern format since the release of Modern Horizons. My hands allowed me to win the game on my third turn in what felt like half of my games, and absolutely everything I did felt extremely powerful.

Of course, with the rise of Bridgevine and subsequent banning of Bridge from Below has come the adjustment of the format’s other top tier Faithless Looting deck — Izzet Phoenix. Phoenix has really been the only remaining competitor for Hogaak at the absolute top of the format. The deck was able to adjust its flex slots accordingly in order to slow down Hogaak to the point that it can flip a Thing in the Ice and take over the game. The addition of Aria of Flame has helped sure-up some of its weaknesses to graveyard hate and given it a nice non-creature route to victory. And — might I add — by no means should you be playing Pyromancer Ascension in that slot.

All that in mind, I’m not here to talk to you about those decks. Bridge was straight up busted in the Vine deck and at the very least decks containing Hogaak, Arisen Necropolis will no longer be able to combo kill you on the game’s second turn. Left in the dust of the handful of tournaments the deck was legal for is the aforementioned Izzet Phoenix deck and a handful of almost-there fair decks that have picked up some new additions with the printing of Modern Horizons. I’m talking about Azorius Control, Jund, Ranger-Captain of Eos Shadow decks and of course Humans. Also rising back from the ashes are decks like Tron and Dredge which were pushed out of the format by Hogaak’s absurd speed and consistency.

Today, I’m going to walk you through the former of those two camps — those beloved interactive decks that just haven’t measured up over the last few years in Modern. With Bridge banned it almost feels like Modern Horizons is being released all over again, because now we’ll get to see how all of these new toys perform in a format where you don’t have to literally maindeck Rest in Peace.

Specifically, we’re going to be talking about two Thoughtseize decks that I think have improved going forward — Jund and Abzan Death’s Shadow.

I want to start by saying that it’s absolutely absurd to suggest that these Golgari-based decks got worse with the banning of Bridge from Below. There was this notion that these kinds of decks were favoured against Hogaak for the past few weeks and I think that’s just not the case. Yes, in broken games, slower games, games where players mulliganed, Jund could keep up with its interaction. But frankly I would never want to play Jund into a field full of Bridgevine. With that said, I think this deck did do a good job of preying on Hogaak’s enemies — Izzet Phoenix in particular.

Golgari decks have been slowly improving in behind the scenes over the past few years. Adding slight upgrades like Assassin’s Trophy and a new sideboard cards like Collective Brutality to give these strategies the kind of catch-all answers that they needed to keep up with the speedy Modern metagame.

But not since Scavenging Ooze and Deathrite Shaman have we gotten a cheap, versatile threat that can impact the board early. Until now. 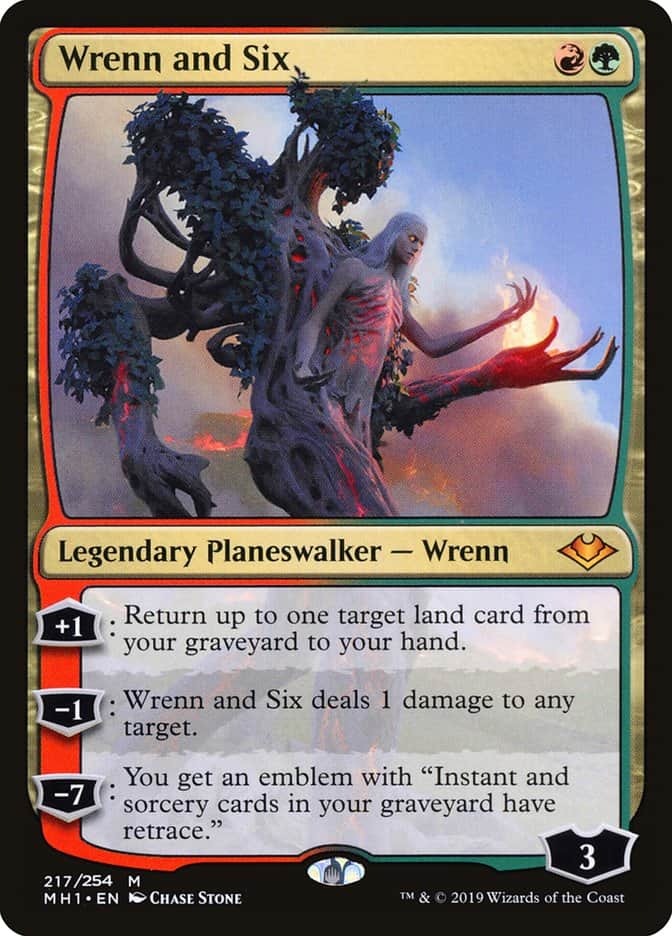 In my opinion, Wrenn and Six has changed the game. The addition of a two mana threat that has an immediate impact on the game no matter what deck you’re playing against is invaluable for this archetype. Jund overlord Reid Duke reiterated this sentiment on when he streamed with the card recently:

A card with this much universal versatility is allows for the threat-base of Jund to be much more modal. You can finally do things like shave Dark Confidant in a format where Lava Dart is a popular card without reducing the power level of your deck.

The list above is something I’ve worked on based off of the list that Reid streamed this past week. Reid worked hard to improve the impact of Wrenn and Six in drawn out games with the addition of Nurturing Peatland and Barren Moor. If you know me at all, you know I’m beaming at the opportunity to increase my land count with any deck and the combination of Wrenn and these utility lands is more than enough to look toward 24 or 25 lands.

Look, I’m not here to yell from the rooftops that this is the best deck in Modern. But I do think it’s maybe the best it’s been in the last couple years at this very moment. With the banning of Bridge the format is bound to turn towards Humans, Dredge, Azorius Control, Phoenix and Tron. With the new additions Jund has picked up over the past few years, all of these matchups are winnable with a tuned list.

I don’t know about you, but that’s all I need to sleeve up my Tarmogoyfs.

Speaking of Magic’s all-time greatest vanilla two-drop, the second deck I want to walk you through is a bit of a brew. It’s actually the first deck I started working on when Modern Horizons was first released — Orzhov-based Death’s Shadow.

Two of the biggest flaws with Shadow decks since the card burst into Modern are threat density and trying to create more consistent draws. Of course these two work off of each other. The fact is, when you draw the card Death’s Shadow your deck just functions at a much higher clip then when you don’t and operate like an under-powered midrange deck.

Ranger-Captain of Eos does a lot to combat these issues. No longer do you have to look towards inconsistent and fragile enablers like Traverse the Ulvenwald to find extra Shadows. Now you can just play your Captain — which is a solid threat on its own — to make sure that all of your draws include a Death’s Shadow. You’re not just at the mercy of your opponent drawing two or three Path to Exiles.

Interestingly enough, I wasn’t the only person to go down this road. In fact, Team Lotus Box on the SCG Tour built a Mardu Shadow deck with a lot of the same components for SCG Pittsburgh.

Even while Hogaak was still legal Jeremy and Season 1 SCG points leader Abe Corrigan were both willing to side step the norm and chose to play the above list. With the added graveyard hate and Shadow traditionally being very effective against Izzet Phoenix they felt like they were well positioned against the field, and Jeremy certainly proved that with his finish.

Moving forward past the Bridge ban, Shadow might still be primed to compete with the top of the format given its aforementioned matchup against the still-popular Izzet deck and the addition of Ranger-Captain. That said, Abe did suggest that it’d be worthwhile to move the deck toward green as a tertiary colour in order to make room for Tarmogoyf, which is exactly what I’ve been trying to do with Shadow for a couple weeks now.

What I have above is in my estimation the most consistent way you can combine disruption with playing to the board in Modern. The rise of Azorius Control that’s bound to happen post Bridge ban does scare me a little, but I think there’s a lot of room to work within the confines of this Orzhov shell.

I’d be lying if I told you I’ve been able to put a lot of time into the shell over the past few weeks but the fact that the guys from Lotus Box and I came to very similar conclusions about the deck in such a short amount of time bodes well for the strategy.

One thing of note is that if Modern starts to trend toward grindier games and slows down a little, I’d suggest trying to mix some copies of Liliana of the Veil into the deck.

Obviously it’s impossible to know exactly which direction the format is going to turn now that the best deck has been at the very least weakened significantly. If this change lifts spell-based combo decks like Neoform or Storm up closer to the top of the metagame to compete with Phoenix, then I actually think Shadow might be the way to go.

Let’s cut to the chase — if you’re trying to absolutely maximize your win percentage you should probably just play Phoenix, go back and pick up your Humans deck or pickup that Dredge deck that Hogaak replaced for the last little while.

That said, you know I’m going to be trying to put Thoughtseize on the stack until someone tells me it’s impossible. So, here are my first two shots at doing that. Take them for a spin, tune them yourself and lets try to bring Golgari back to life again in Modern.

Hit me up on Twitter when you break it. Let’s get it!