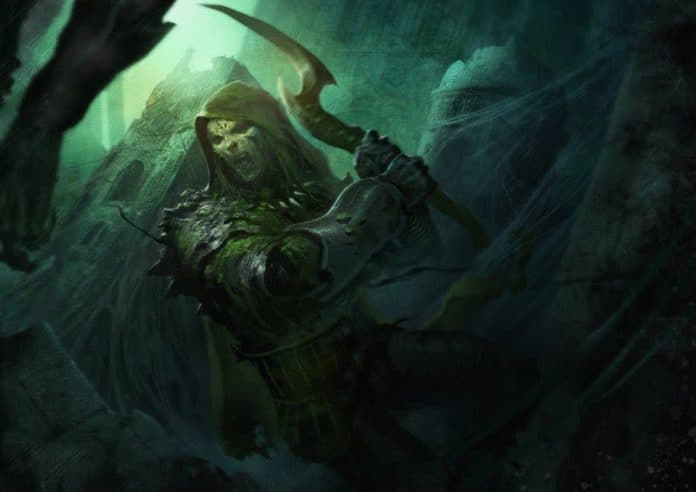 There is no honor in winning a match of Magic. There is no special prize for playing fair. Only wins and losses. Dredge thrives in a fair metagame where people aren’t playing very much hate (read: pretty much all the time) and it still doesn’t get the respect it deserves.

For example: Let’s say you’re 80% to beat some deck XYZ in game 1, and they have 2 pieces of dedicated hate for Dredge. They only have a 20% chance to have one of those cards in their opening hand. If we give them 4 turns to draw it on the play, and an Opt to look 2 more cards that number only increases to 35%. Putting a couple hate cards and calling it “good enough” leaves these decks mulliganing for hate at abysmal rates or more commonly trying to keep an okay hand and pray. Sounds like prey to me.

Dredge won the SCG Classic the weekend after the Faithless Looting ban. Dredge has won three of the last four Face to Face Games Edmonton Opens. It is a deck you should know how to play because when it is good, it is good.

A quick aside, this deck is straight from SodekMTG. If you want the best Dredge lists you either have the option of playing the hundreds of hours a month to maintain your knowledge of the metagame and keep a week ahead, or just copy his lists. It’s more a factor of effort, where realistically you won’t be able to outwork him in deckbuilding, so it’s generally better to cooperate by reaching out to him on Twitter, Twitch, or YouTube, or just play his lists wholesale. I’ll adjust the sideboards for my local metagame, but for a safe and solid list you really cannot get better.

The maindeck is rarely going to change. The slots have become so tight over time and I have a hard time believing you are going to find a better game 1 configuration in the post-Looting world. Transitioning away from Faithless Looting led to the inclusion of Tome Scour and a reconfiguration of the mana base. I do not recommend playing Insolent Neonate simply because the best-case scenario for Neonate is milling you for 5, and Tome Scour simply does that all the time. There has been a bit of a shift towards Merchant of the Vale. I again am on team Tome Scour for now, but I can imagine being converted further down the line. The real magic is in the new manabase, particularly Forgotten Cave. This is the upgrade that was forgotten during Hogaak madness and it boosts the decks power level considerably. Dredging one of these into the graveyard feels very similar to Dredging a Faithless Looting, yet it may be even stronger in the late game.

90% of the time, Dredge is about sequencing your plays to best advance your own plan. In most matchups, simply building a big board and attacking is powerful enough. As such most of what you’re doing is trying to churn through as much of your deck as possible while tactically playing your lands to bring Bloodghasts (and Prized Amalgams) into play. As you’re going to be Dredging for most of your draw steps, the cards in your opening hand are often the only randomly drawn cards you see during a game. This means that Dredge mulligans very differently than most of the format and is the first big area to focus on.

The easiest way to start is with a clear image of what we’re looking for. Good Dredge hands have:

2 lands, one of which can produce green
A turn one play of either Shriekhorn or Tome Scour
A turn two Cathartic Reunion with 2 Dredge cards available.

That’s it. We aren’t looking for anything else. You won’t need both a turn 1 and turn 2 play, but we need one or the other. If you’re keeping a hand that doesn’t have any of this then it is most likely a mistake. Two lands are a requirement. This is a 20-land deck, and every turn you try to draw a second land is a turn you are not Dredging. Producing green is a requirement because you’re looking to cast Life from the Loam in the midgame to continue to make land drops. Generally I’m looking for the turn 1 play the most, as each draw that can become a Dredge makes your draw more powerful. Cathartic Reunion is high enough velocity that with two Dredge cards it will usually outpace a hand with a turn one play, so I’ll keep those as well. If it doesn’t have any of this, it goes back into the deck. You’ll need to get used to mulliganing to 4 quickly, but your win rate will drastically improve.

Get your colours in play first. Pay the life necessary to get your green mana in play immediately, because dredging away the lands you need to fetch is a painful way to lose the game.

Try to save your land to play as late in the turn as possible. Being able to Dredge several cards then play a land back to get Bloodghasts is important to success.

If you’re looking for a Forgotten Cave in the midgame to start looping back with Life from the Loam, just dredge back Stinkweed Imp instead of Life from the Loam and hoping. The extra turn you might save when you hit is much less important than the turns you may have wasted by dredging fewer cards when you miss.

I’m not methodical enough to provide you a full sideboard guide, but I can give you an idea of what you’re looking to do. The biggest mistake you can make learning to play Dredge is to board in too many cards. A simple rule of thumb is you shouldn’t be switching more than 6 cards. Lightning Axe, Nature’s Claim, and Ancient Grudge are straightforward. Bring them in when you need to destroy creatures, enchantments, and artifacts respectively. Thoughtseize is your way of trying to beat decks that are faster than you. As the cards coming in can be obvious, it seems more productive to tell you what to take out rather than what to bring in. Several copies of Tome Scour comes out in most matchups, especially if you’re bringing in Lightning Axe. If the matchup is a pure race you can shave a copy of Prized Amalgam. If you’re boarding in the Blast Zone, board out a City of Brass to compensate. Last if you need the extra slot you can shave one Golgari Thug.

A second sideboarding tip is that people have diverse graveyard hate for you. Instead of pre-emptively boarding in your answers to any hate they can have, just bring in one piece and adjust going into game 3 if necessary. If you aren’t certain your opponent has Leyline of the Void or Rest in Peace, leave the Nature’s Claims in the sideboard.

Give Dredge a shot. It has been one of the premier decks in Modern for a couple years at this point, and it seems like its not going to be going away any time soon. After the more recent modern shakeups, the deck no longer has the same target on its back and that’s precisely when it is at its best. Feel free to reach out to me on Twitter, @bstee with any questions or thoughts and check out my stream when I’m live at twitch.tv/bsteeboi.