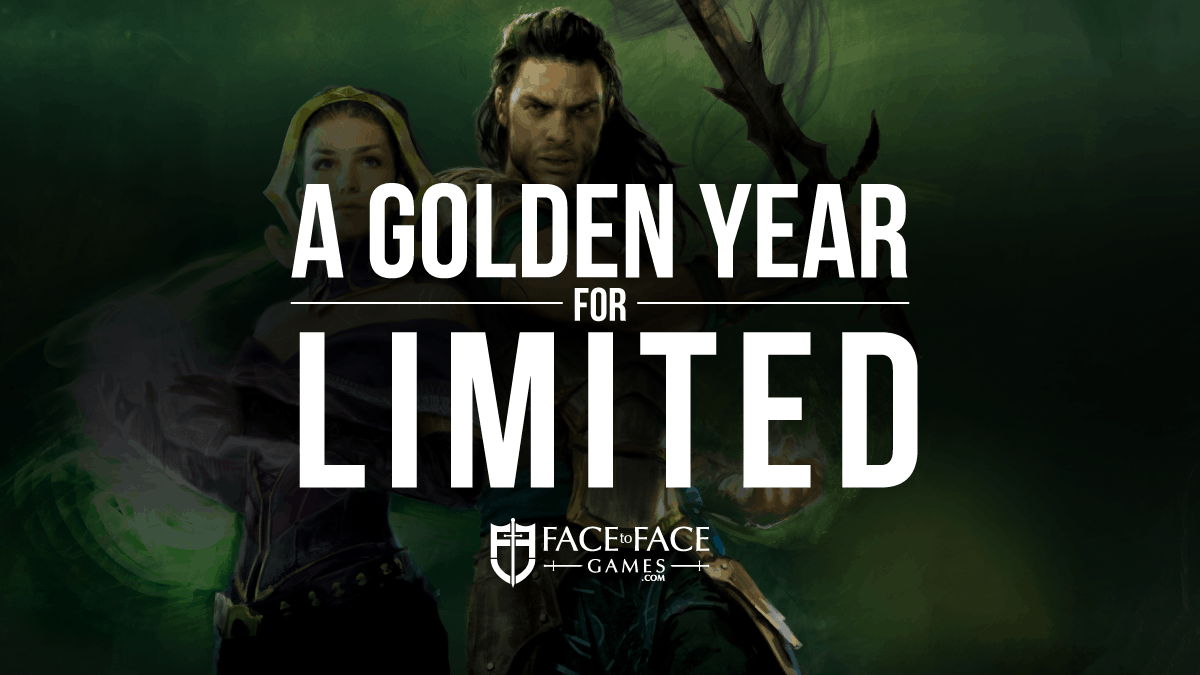 2019 was a turbulent year for Magic, between the radical restructuring of Organized Play and bannings that surrounded every Constructed format’s dysfunctional metagames and play-patterns. But, if there’s a feel-good take in me right now, it’s the following: Wizards is on a roll with their Limited set design. Every set in 2019 was a fantastic Limited experience. Ravnica Allegiance, War of the Spark, Modern Horizons, Core Set 2020 and Throne of Eldraine all felt different, yet they are united by their richness and replayability.

We are in a golden age of Limited set design, and we should appreciate that.

What I don’t mean to argue is that every set in 2019 is an all-timer. Simply, this is the most consistently above-par run of Limited environments Wizards has managed to string together in a while. What constitutes the best Limited sets of all time is a subjective question that says as much about the player as it does the set.

Certain sets show up more often than others when we talk about the great formats: triple Innistrad, triple Khans of Tarkir, 2x Hour of Devastation 1x Amonkhet, and so on. However, what I can tell you definitively is that after Hour of Devastation came Ixalan, the worst Limited format in a Modern card frame, and in the spring after Innistrad came Avacyn Restored, which was almost as bad. After Khans of Tarkir came Fate Reforged, which was notoriously and unpleasantly dominated by rare-slot bombs, and until this past year, core sets were defined by the simplicity of their play and the drabness of their mechanics.

Every 2019 format was solid. They all got on base. So what were some of their recurring features?

More than anything else, this year’s formats were balanced by colour intensity. They asked you to think critically about colour requirements in your deck in both draft and construction.

The Ravnica sets were a subtle prelude to this new verve, with an obviously pushed collection of uncommons and rares tuned by their onerous colour requirements. In a format where every pack had a minimum of one guildgate, you had to be strict about picking fixing and weighing the obvious power of any [Card]Kaya’s Wrath[/Card]s or [Card]Frilled Mystic[/Card]s in your pile against the contents of any pack. Where guildgates fell in your pick order, in anticipation of these cards, was a compelling feature of the third tour through Ravnica. Elsewhere, Eldraine very obviously pushed players towards mono-colour whenever possible with the Adamant mechanic, the colour intensity of double-spelling Adventure cards, and the quad hybrid uncommons like [Card]Resolute Rider[/Card] and [Card]Arcanist’s Owl[/Card]. We all got to debate the virtues of [Card]Golden Egg[/Card] and [Card]Scalding Cauldron[/Card] and of pushing our colour commitments further and further into the packs. Yet, quietly, the new trend of pushing power level higher with colour commitment extended to formats and cards where it wasn’t an explicit theme, like Core Set 2020’s triple-pipped rares ([Card]Gargos[/Card] and [Card]Drakuseth[/Card]) and [Card]Nicol Bolas, Dragon-God[/Card] in War of the Spark.

All the sets this year felt a lot like Cubes: the packs are deep on playables, with almost every card, no matter how fringe, having a home in someone’s deck. Sharply synergistic formats like Modern Horizons and Eldraine made 1/1s for one with upside actually playable, even coveted. Tacking on a 1/1 Zombie Army token made [Card]Tormenting Voice[/Card], a filler card at best, into [Card]Honor the God-Pharaoh[/Card], a card I was always happy to pick up late in the pack.

This higher power level helps both the experienced drafter and the newer player finding their footing, because the freedom to spend picks on cards you don’t play benefits everyone. Less polished drafters can dive in knowing they won’t trainwreck their draft by wasting some picks here and there—the depth of packs guarantees a deck with playables—yet experienced players will feel the rewards for finding their lane. Now more than ever, good drafting pays off. As long as you find your lane, you will accrue a surplus of playables enabling you to construct your deck as a coherent whole with a focused gameplan rather than a smattering of good cards and whatever other filler you could scavenge.

Maybe the most in-your-face pivot from old design paradigms in 2019 was a return to even older design paradigms: removal is now closer to the days of [Card]Doom Blade[/Card] at common. To see the substantial upgrade in common removal, compare [Card]Eviscerate[/Card] or [Card]Daring Demolition[/Card] or [Card]Walk the Plank[/Card] to [Card]Bake into a Pie[/Card] and [Card]Ob Nixilis’s Cruelty[/Card]. [Card]Murder[/Card] made the trip from core set common to core set uncommon back to core set common. Removal is now faster, more available, and more total. It is now easier to fashion decks from commons and uncommons that can answer any number of bombs.

Shell-shocked from pre-release weekend, everyone declared War of the Spark a glacial format where bombs decided games. [Card]Tamiyo’s Epiphany[/Card] was the best common. Fast forward a month or two, and I was soft-forcing RB decks with [Card]Burning Prophet[/Card]s, [Card]Lazotep Reaver[/Card]s and [Card]Toll of the Invasion[/Card]s, with a rare or two when I got lucky.

Early on in Core Set 2020, people were declaring white unplayable and setting up durdling loops in the Sultai wedge. Fast forward to the end of the format, and Ari Lax was writing a primer to white-based aggro (here) and I was addicted to making my [Card]Lavakin Brawler[/Card]s un-blockable with [Card]Goblin Smuggler[/Card]. I still lost sometimes to [Card]Risen Reef[/Card] value engines.

In the first impressions of Eldraine episode of the Limited Resources podcast, Marshall Sutcliffe and LSV declared that drafting white and aggro were losing strategies respectively (here). The pop you may have heard in your mind was [Card]Ardenvale Tactician[/Card]’s music. It may also be the striking of a [Card]Midnight Clock[/Card]. In one of the last Eldraine drafts LSV streamed, he trophied with Boros, taking every [Card]Rimrock Knight[/Card] he saw.

You truly could draft whatever you wanted this year. Do you like tribal aggro? Do you like prison? Do you like engine decks and durdling buildarounds? Do you like one colour or four? This year, you were never pigeon-holed into blitz-speed aggro (e.g. Zendikar) or meandering toward an explosive end-game (e.g. Rise of the Eldrazi). The simple truth was every set this year was receptive to fast beatdown, plodding control, and everything in between.

I sing their praises, yet the 2019 formats were obviously not perfect: War of the Spark Sealed was unpleasant, and while every format has their bombs, the current design template now earmarks a six-mana rare slot for a card worth so many more wins above replacement relative to any other possible card you could put onto the stack (e.g. [Card]Ethereal Absolution[/Card], [Card]Liliana, Dreadhorde General[/Card], [Card]Chandra, Awakened Inferno[/Card], [Card]Garruk, Cursed Huntsman[/Card]).

However, if you are reading this article and thinking that these draft formats were homogenous and warped by the existence of one dominant archetype, I recommend that you organize a draft with real people and stop drafting on Arena. The consistent exploitability of the bots has reduced a very strong, above-par run of Limited formats to a bunch of meme decks: Gates.dek, the [Card]Heart-Piercer Bow[/Card] Deck, Ux Mill, etc. If you are drafting Eldraine on Arena after the most recent update, know that you will wheel every [Card]Gingerbrute[/Card], [Card]Rosethorn Halberd[/Card] and [Card]Wildwood Tracker[/Card].

Besides, it’s been a tough, bittersweet year for the community—and the holidays have just passed. I don’t know if it’s the pitter-patter of snow and its promise of a new year, of new and better things, but I would recommend pulling together some friends with a box of literally any set from 2019. You’ll be glad you did.