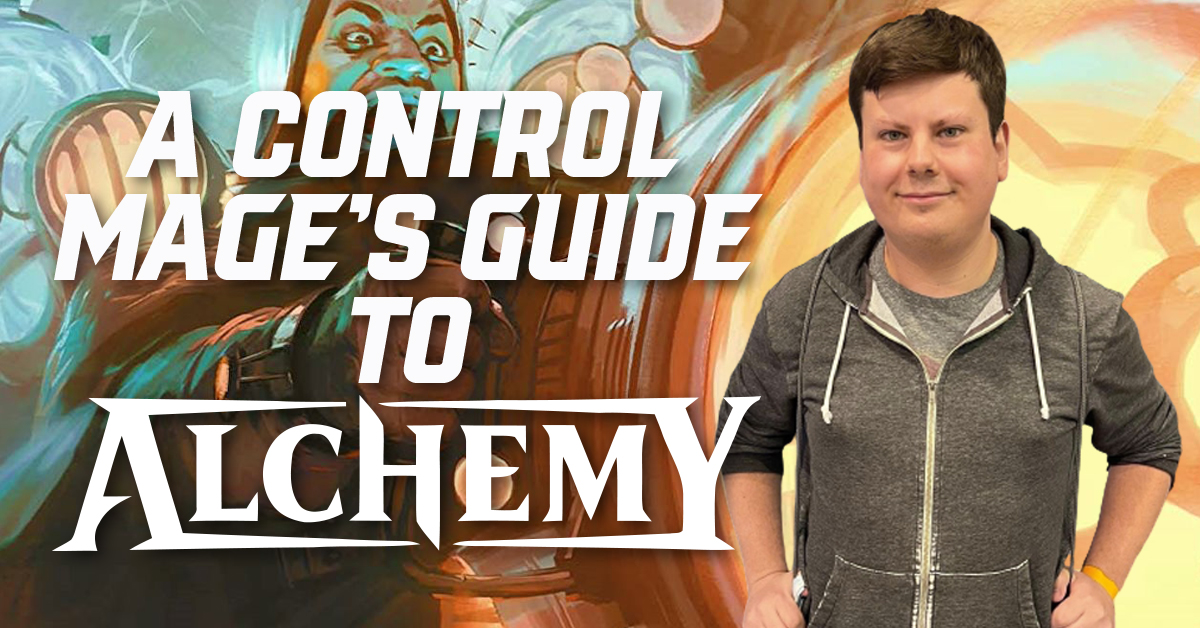 MTG Arena fans were hit with an unexpected reveal last week: the announcement of a brand new Arena format, Alchemy.

Wait – first off, what even is Alchemy??

Alchemy is a new Arena-exclusive format that is essentially Standard with re-balanced versions of cards as well as brand new digital only cards. For more info check out the official announcement:

Honestly, while Alchemy is definitely a controversial addition to Magic: The Gathering (for a variety of reasons), ultimately I believe it’s a step in the right direction for digital Magic. Magic is a complex game with a variety of formats. As more sets release it becomes harder to balance formats such as Pioneer and Modern when new powerful cards are printed. While I disagree with the F.I.R.E. design philosophy, I do agree that one of Magic’s limitations has been its inability to correct problematic cards after they’ve been printed. Unlike games such as Hearthstone and Legends of Runeterra, Magic has been unable to properly balance cards and metagames – until now.

Alchemy provides a way for Arena players to enjoy a more-balanced Standard format. While I believe Magic should adapt its design philosophies (due to the number of bans in both Standard and Modern over the last few years) this was an inevitable feature to Magic’s premier digital platform. Alchemy will provide a unique and refreshing version of Standard for its digital clientele.

One positive aspect about a format like Alchemy is that the more balanced it is the higher deck diversity will be. I remember in recent times how Standard deckbuilding was stifled by the ludicrous amount of powerful cards in the format. It was nearly impossible to construct a Control deck during Zendikar Rising and Kaldheim Standard. It was only until recently with the sunsetting of Emergent Ultimatum decks and the rise of Lier and Hullbreaker Horror decks that Standard saw more dominant Control strategies.

With Alchemy: Innistrad already spoiled I’m excited by the deckbuilding potential the format has. Let’s look at the rebalanced cards and new additions that I think will make Control a viable strategy.

Before we can begin to talk about new cards it’s important to understand the rebalance changes that come with the Alchemy format. First, Alrund’s Epiphany, one of the most dominant cards of the current Standard format, is considerably nerfed with this rebalance update. Instead of guaranteeing you two 1/1 Bird tokens, Alrund’s Epiphany now has to be foretold in addition to paying the full seven mana to get the full effect. This is an important update because the strength of Alrund’s Epiphany was the ability to put immediate pressure on your opponent. The snowballing damage from the Bird tokens on top of cards like Goldspan Dragon and Hall of Storm Giants could easily end games on the spot. Now, the card costs an additional mana while not guaranteeing immediate pressure. While I’m not sure if this change will considerably nerf the card, it’s definitely a major change that will have resounding effects on the Standard format.

Cosmos Elixir gets a bit of a buff in Alchemy. Now, Elixir allows you to scry 1 if you were to gain 2 life. This is a solid upgrade for a Control strategy for a few reasons. Against creature decks the scry can help you dig for your wraths, while against a mirror it can help scry away a removal spell in turn for a Hullbreaker Horror or countermagic. However, the unchanged mana cost of the card is probably too expensive for it to be a viable consideration, but it is an upgrade to consider.

With Alchemy we get a variety of cards with brand new keywords:

Alchemy builds upon keywords introduced in Historic Horizons and it’s worth noting the implications these keywords can have on deck construction. “Draft” is a mechanic that allows you to pick from a curated list of cards when the ability is triggered. For example, when you Draft a card with Ishkanah, Broodmother, you’ll be given three options from a curated list of spider-themed cards to choose to add to your hand.

Conjure is an ability that adds cards to your hand or deck. Toralf’s Disciple, for example, adds four copies of Lightning Bolt to your library whenever you attack, talk about value! Imagine pushing through a reasonable amount of damage with your Mono-Red deck in the early and mid-game, and then topdecking any number of your four or eight copies of Lightning Bolt in your deck to close out the game. To be a master in the Alchemy format you’ll have to commit to memory the various cards that can be Drafted or Conjured to have an expert read on a given game.

While Alchemy provides a variety of new exciting creature cards I’m ultimately most interested in how Control decks will look in the format. Nothing gives me more pleasure than playing draw-go, or wrathing an opponent’s full board. Let’s talk about the key cards that will be vital for Control strategies in Alchemy:

Let’s go into a little more detail about why this is incredibly powerful in a Control deck. Take Hullbreaker Horror for example. Hullbreaker is at its best in decks with cheap instants, such as Consider and Fading Hope. Hullbreaker pairs well with cards like The Celestus that make it so on turn seven you can play a Hullbreaker and protect it or bounce a spell or permanent by casting a cheap one mana spell. Absorb Energy discounting Hullbreaker Horror by just one mana ramps you an entire turn ahead of your original gameplan. This allows you to cast a Shadows’ Verdict or Doomskar on turn five while flashing in a Hullbreaker on just turn six. With more mana at the ready you’re up a turn to flash in Hullbreaker with Consider or Fading Hope as backup. And hey, if that wasn’t convincing enough just think about the implications the mana discount has with Lier, Disciple of the Drowned.

Next up is Divine Purge. Divine Purge is a nice answer to hyper-aggressive creature decks, such as Mono White, that aim to supplant Control strategies early on in the game. Divine Purge also completely destroys any Clue tokens you might give your opponent off of a Fateful Absence. While your opponent does get to replay their creatures eventually, putting them off a few turns is well worth the investment.

Kindred Denial is an interesting iteration on Counterspell. For four mana you get to counter an opponent’s spell and then draw a random card from your deck with the countered spell’s same mana value. In decks that have a variety of spell costs, such as a Lier or Hullbreaker Horror deck, this might actually be some good value. Countering a three drop might give you an Absorb Energy or Divide by Zero, whereas countering a spell with a higher converted mana cost might give you a wrath or Lier. Firing this off against an Alrund’s Epiphany allows you to immediately grab your own copy of Epiphany or a Hullbreaker Horror. Four mana is definitely expensive for a counterspell but having one copy might be the trick. You’d want to be able to seek cards from every mana value in your deck, and while Lier decks don’t usually play six drops…

…Discover the Formula might do the trick. Discover is an interesting draw spell that gives you three guaranteed nonlands that cost one mana less for an initial investment of six mana. This card plays extremely well already with Absorb Energy, keeping the discounts flowing. I’d much rather be casting this card for five mana than six, but it may be a nice one-of to include in your Absorb Energy control decks. This card plays super well for Control decks in the late game since it gives you a higher probability of finding one of your finishers. Finding a discounted Lier of Hullbreaker is big game since it gives you an extra mana to cast a spell in addition to your threat.

While Geistchanneler may not be a Control card per say, it’s worth talking about. Channeler may not be the most powerful card on the surface, but being able to discount your Alrund’s Epiphany, Divide by Zero or Unexpected Windfall seems huge. The power of this card comes from being able to get your engine rolling earlier in the game than usual. While this card is in line with the other discount Blue cards it seems like a better fit for Izzet Epiphany. Topdecking a 1/3 is not ideal by any means, but the early mana advantage this card gives might make it worthy of building around.

Key to the Archive is another weird card that’s a bit difficult to evaluate. While we’ve seen similar cards like this one see play in the past, such as Hedron Archive in various ramp decks, Key to the Archive allows you to loot, giving you a card you draft from its specific spellbook.

Here are the cards included in Key to the Archive’s spellbook:

This is a weird variety of cards to choose from. Drafting from Key’s spellbook is awkward because you might want Day of Judgement in a given spot but end up having to choose from a selection of Approach of the Second Sun and draw spells. The card you need in a specific spot is never guaranteed. However, if you can justify having a four mana artifact that simply adds two mana to your deck that loots upon entering the battlefield, the spellbook is just an added bonus at that point. It’s also worth noting Key is a great flicker target as well.

And if you’re looking for a place to start, don’t worry – I got you covered.

Overall it’s difficult to predict Alchemy’s metagame with the addition of so many new and powerful cards as well as returning, rebalanced cards. Cards that Conjure or Draft from a spellbook are also weird in their own right since their value is sometimes based on luck of the draw. However, I have hope that Alchemy will be a nice alternative to Standard that allows the MTG Arena team to balance the format as they see fit. Here’s to hoping a traditional draw-go strategy will be viable!