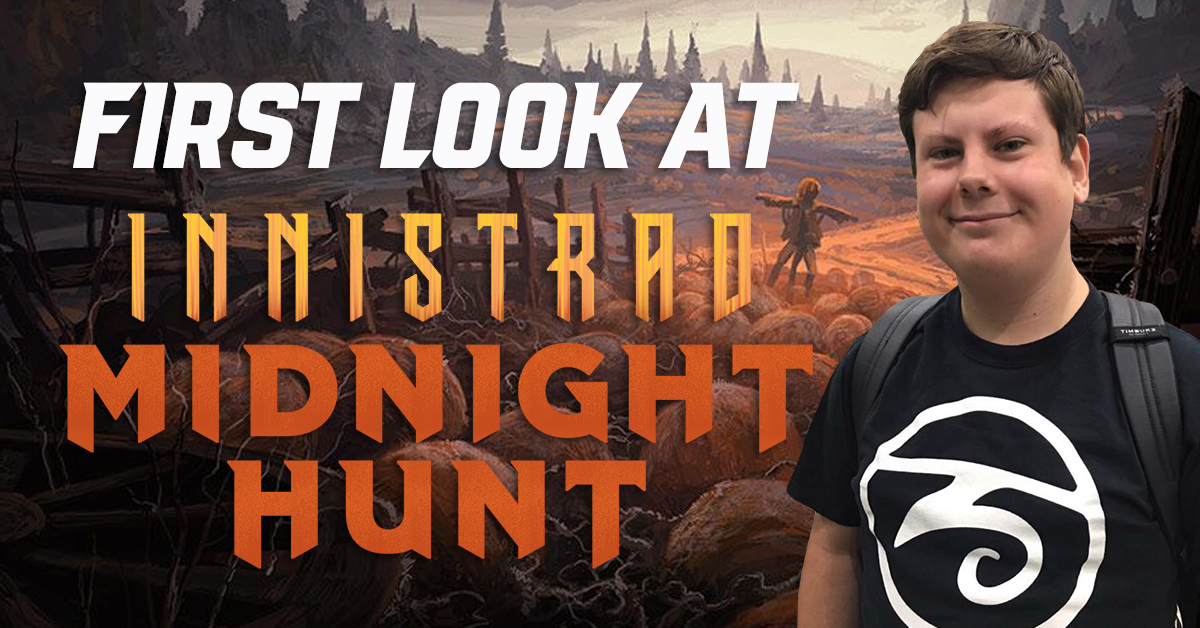 Like many other Magic players, Innistrad is without a doubt my favorite plane. I first began playing Magic casually during Scars of Mirrodin block, where I dabbled a bit in drafts and prereleases with my highschool friends. I wasn’t all too invested in Mirrodin as a plane, since I wasn’t playing during its original release. It wasn’t exactly the best fit for someone brand new to Magic. However, when Innistrad rolled around in the fall of 2011, I became way more invested in Magic. I remember scouring the spoilers, being mesmerized by both the interesting transform mechanics and the macabre and haunting art. With Innistrad: Midnight Hunt and Innistrad: Crimson Vow both coming out this fall, you could say I’m just a little excited. Okay…VERY excited.

While Midnight Hunt doesn’t officially release until September, Wizards shared a couple of preview cards to generate some hype and give us a glimpse into what cards are joining the next Standard format. While only a handful of cards were previewed, I’m actually really hopeful of the influence they’ll have on Standard upon release. Let’s take a look!

Back when Adventures in the Forgotten Realms released, I expressed my dismay at Power Word Kill. With Heartless Act leaving Standard upon rotation, there were no answers at two mana in the four remaining sets to the remaining potent threats of the format. In my article about Standard 2022 decks (link), I talked about the power of Izzet Dragons. Izzet Dragons loses very few cards upon rotation, and keeps its core threats in Goldspan Dragon, Galazeth Prismari, Inferno of the Star Mounts, and Faceless Haven. While Black has access to cards like Poison the Cup, Baleful Mastery, and Flunk, it doesn’t have a clear and easy way to kill a dragon at two mana. Enter: Infernal Grasp.

Infernal Grasp is going to be such an important removal spell in the next format due to how cheap and effective it is. In addition to Izzet Dragons, Standard 2022 has shown us a variety of mono-colored aggro decks, such as Mono Green and Mono White to be effective. Both decks, whether snow-based or not, utilize the power of creature lands such as Faceless Haven and Lair of the Hydra to close out games even through wrath effects. Infernal Grasp gives midrange and control decks the reach it needs to take down some of the haste and wrath-proof threats of the format, which is why I believe it’ll be a pillar of the next Standard format. Two life is but a cheap price to pay in the face of a flying, lethal dragon.

Play With Fire is a nice upgrade to Shock, which gives Red a way to control their draw step if they decide to hit the opponent for two damage. While this seems like an easy fit for a Mono Red deck, I’m not sure if Red Midrange decks such as Izzet Dragons will adopt it over cards like Frost Bite and Dragon’s Fire. This card probably has more influence in Pioneer and Modern, but in Standard I can see it being a nice inclusion in Mono Red.

Consider this: play this over Opt in your Modern decks. All joking aside, Consider is a nice cantrip that I think could have some Standard implications depending on what cards we see in the Innistrad sets. Flashback is confirmed as a returning mechanic and the value of Consider will go up depending on what graveyard-centric cards are revealed. We could also see an Izzet cheap spells deck with Play with Fire and Demilich as well. We’ve had Standard formats where Opt has seen play and hasn’t, so only time will tell how useful Consider will be.

Similar to Consider, the value of this card in Standard will depend on what other Zombie creature cards are printed in the near future. Zombies was a Standard-viable deck with the release of the first Innistrad block during 2011-2012, but that deck had Zombies such as Gravecrawler and Geralf’s Messenger and topped out at Falkenrath Aristocrat and Thundermaw Hellkite. There are a couple of aggressive Zombie creatures currently in Standard 2022, such as Dungeon Crawler and Wight, with a lord in the form of the five-mana Narfi, Betrayer King. However, I’m not convinced Champion of the Perished will be Standard-playable until better Zombie cards are spoiled. I’ll leave this one to the Modern and Pioneer players for now.

Triskaidekaphile is definitely…a weird one. This card seems too niche for a format like Standard, but it may have some potential applications. Standard already has access to similar cards with better effects, such as Gretchen Titchwillow. Having thirteen cards in your hand at the beginning of your upkeep isn’t the easiest thing to accomplish either. If anything, I could see Triskaidekaphile as a sideboard card for potential Control mirrors, where decks are boarding out part of their removal package after game 1. You could try to get to thirteen cards through casting Sea Gate Restoration, but that’s still just wishful thinking. I don’t think this card will see much play in Standard, but I’m willing to be proven wrong.

Did I read that right? Wrenn and…Seven?? Good for them. Wrenn and Seven is a planeswalker I’m actually really excited about – for a number of reasons. In the last half decade or so of playing Standard, there have been very few mono Green planeswalkers designed that have not been creature-based, save for Nissa, Who Shakes the World and Nissa, Vital Force. (images)

The other Green planeswalkers have been unsurprisingly designed to interact profitably with creatures, either through tutoring for them, giving them buffs, or providing an Emblem to give them a buff or permanent effect. Wrenn and Seven reminds me a bit of both Nissas pictured above, yet seems perfectly balanced for the upcoming Standard.

The first test Wrenn passes is that it can protect itself. Wrenn’s -3 to make a Treefolk token (with reach!) protects Wrenn from almost all the creatures in Standard, save for threats with Menace. I love that on turn five you can play Wrenn and immediately protect it profitably from an incoming Goldspan Dragon, and on turn six it blocks Inferno of the Star Mounts. While there aren’t any big cards in the current format that I’d want to ramp into with Wrenn, Wrenn provides a great value engine, allowing you to gain a mana advantage. Wrenn also interacts well with lands with sacrifice abilities, such as the cycle from Kaldheim, and the creature lands from Adventures in the Forgotten Realms. It can also find the scry land cycle from Strixhaven. Finally, with the return of Flashback and potential other graveyard interactions, I’m hopeful there will be even more cards for Wrenn to profitably interact with. All in all, if I were to build a deck with Wrenn I’d definitely want to focus on maximizing its +1 ability.

While I’m excited for the future of Standard with the rotation of Throne of Eldraine and the addition of Midnight Hunt, I’m also just happy to return to my favorite plane of unspeakable Victorian and cosmic horror. I’m hopeful both Innistrad sets will be a much awaited return to one of Magic’s most iconic planes and will pave the way for a new and exciting Standard format. What are you hoping to see from the upcoming Innistrad sets? Let me know!