A First Look at Phyrexia All Will Be One Standard 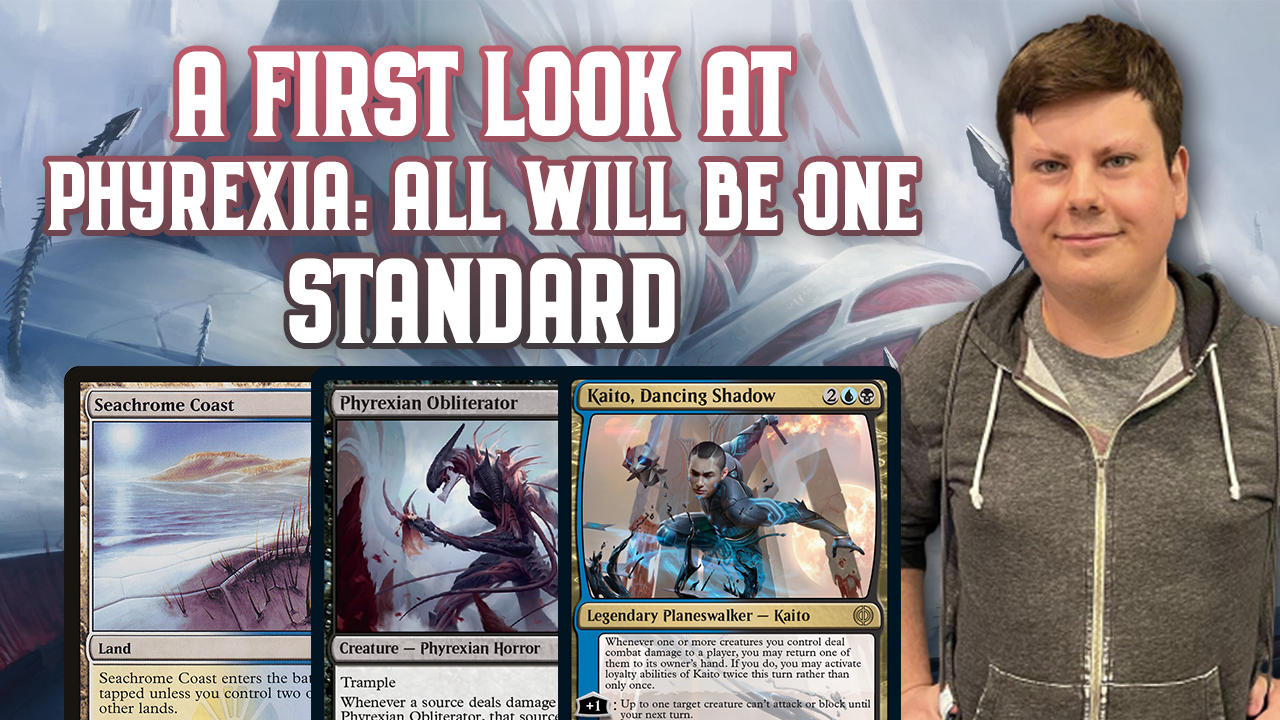 While it feels like The Brothers’ War only came out a few weeks ago (which I guess it kind of did), Phryexia All Will Be One is looming on the horizon with a release date in early February. While only a small part of the set has been officially revealed, major leaks have found their ways on social media.

Phyrexia Standard is going to be important for me as a competitive player. I’m currently qualified for Dreamhack San Diego in April, the Standard Regional Championship where I’ll be aiming to snag a Pro Tour invite. While I don’t play as much Pioneer and Modern, Standard is wildly available to me on MTG Arena, and I’ll be using Arena to test. That being said, I want to do some analysis on cards I think could be major players in the new format.

It’s also hard to ignore the fact that Standard already has six sets in it currently. In past times once Standard has the majority of sets in it, it’s harder for new strategies to break out. By this point in the Standard rotation cycle, decks begin to change adding cards here or there, rather than scrapping or creating entirely new archetypes. In recent releases though, sets have been pretty large, meaning that there could be enough cards in a given release to shake up the format.

Let’s take a look at some of the cards from Phyrexia All Will Be One that might have some impact on the current metagame:

Kaito is a card that I believe could make an appearance in Grixis Midrange, what is regarded as Standard’s current most popular deck. The four-drop slot in Grixis is already heavily populated by three copies of Sheoldred the Apocalypse, as well as fringe copies of Ertai Resurrected or Saheeli, Filigree Master. Here are a couple of notes on Kaito that make him relevant:

Overall I think the card does just enough that it’s worth of a 1-2 slot inclusion in the maindeck of Grixis. With Standard being as midrange-y as it already is, this is a card that can help break board stalls and pull you ahead. While it’s premier home is Grixis it might just be good enough as an auto-include in Esper as well.

Bitterblossom this is not, but it’s still a very powerful card in my opinion. One key difference between this and Bitterblossom is that you can mitigate this card’s shortcomings once your opponent has three poison counters. I can definitely see games where you’re on the play and draw two copies of this card and just bury your opponent.

White midrange decks also have some fringe ways to gain life which can offset the life loss. I think this card is also flexibile in that it could show up in control, midrange, and aggro decks as a 4x sideboard card. I’m curious to see if this set will have more solid White cards that grant poison counters, but as it stands this card is definitely scary.

While I don’t think this card is going to be particularly playable I want to at least address why. In modern day Magic this card just seems unplayable. Tapping out on three to play an enchantment that might not live to tell the tale is pretty fragile. This card might net you a card or so, but with Invoke Despair seeing heavy play it’s doubtful this card will do much.

In modern Magic the cards just do so much. Why tap out for this on turn three when you could be playing Corpse Appraiser, Raffine, Fable of the Mirror-Breaker, or Wedding Announcement instead? Even in Mono-Black decks you have Gix which acts as an even better Phryexian Arena in that archetype. Don’t be fooled by this classic reprint making its way back to Standard!

Argentum Masticore seems fragile on the surface, but this is another card that might be playable in Midrange decks. I like the flexibility of this card, in that it can destroy a number of different kinds of permanents. It never feels like you’re truly out of cards in all the midrange mirrors Standard has to offer, so I wonder if this card can push through in the current meta. It artfully dodges around Sheoldred in combat, and pretty much most Standard creatures for that matter. It dodges Cut Down, Go for the Throat, and Void Rend, but does get got by Abrade and Destroy Evil.

I think this card has potential to swing games in midrange mirrors, being able to shoot down various permanents while also acting as a fantastic attacker and blocker. I’m not sure it does exactly enough, but this card is flexible enough that I’m going to keep my eye on it and at least give it a shot.

I’d be remiss in writing this article if I didn’t mention the return of Phyrexian Obliterator. The only home for this beast of a Magic card is in Mono-Black aggro/midrange, but at the end of the day I’m not totally convinced it’s better than Sheoldred. Maybe there’s a build of Mono-Black where you play this as a four-of maindeck and sideboard into Sheoldred in certain matchups. I think it’s hard to justify playing this card when there are so many flexible removal spells in the format, like Go for the Throat, The Wandering Emperor, and Destroy Evil.

At its worst, Nissa is a five-mana planeswalker that you also have to pay four life to cast. You can immediately destroy and artifact or enchantment, or start +1ing to create tokens that scale with Nissa’s loyalty. This isn’t the worst deal in the world, but it is pretty costly. The -7 ability is particularly scary, but it’s an expensive Overrun.

Nissa is flexibile in its casting cost, but based on the current Standard metagame I’m not sure this card really has a home. Ajani and Tamiyo are both in Standard and see little to no play. The format feels too tempo-oriented to where you have the luxury of paying life for Phyrexian mana. Also with Green being so weak in the current meta is there even a good home for this planeswalker? I do think this card is certainly powerful, but the expensive casting cost and current state of the meta make me think this will not be a gamechanger by any means. Maybe once rotation rolls around in the fall Nissa will have her chance to shine.

This planeswalker, however, I do think will make some impact on Standard. The Eternal Wanderer certainly has a pretty high casting cost, and also conflicts at six mana with Sanctuary Warden. However, I do think there are some implications that make this card worthwhile to play in Mono-White Midrange.

What’s holding The Eternal Wanderer back is its mana value. It’s a unique card in that it’s hard to remove, protects itself while putting threats into play, wraths, and can be a value engine. I think this card does enough that I want to play with it in Standard, but I’d be worried about having too many six drops in my deck, especially if I already want to play Sanctuary Warden. My other worry is that Grixis can get under this card too easily with countermagic, discard, and Invoke Despair. I do think it’s a card, however, that can give Grixis a pretty big headache if it sticks around. It’s a card I definitely think is worth playtesting and has a lot of hidden potential.

The fast lands are a huge win for Standard and Pioneer, but the clear victor here is Grixis Midrange. Back when I won my invite to Dreamhack San Diego, I remember playing my Rakdos Midrange deck against the two Grixis decks in top 8 before clinching my invite. One key interaction in our matchups was that I was able to pressure my opponents with cards like Tenacious Underdog, Bloodtithe Harvester, and Graveyard Trespasser while my opponents took multiple points of damage from their pain lands. I beat my quarterfinals opponent, a very talented magician I might add, mainly due to the fact that they drew four painlands that game.

Grixis gaining Darkslick Shores and Blackcleave Cliffs is a huge win in that Grixis now gets to cast their early plays scott-free. This slides the advantage bar further in Grixis’ favor against decks like Mono Red and the various Mono-White and Azorius soldier decks the format has to offer. Saving 3+ life a game is a big deal.

While I don’t expect Standard to have any major changes with the release of Phyrexia: All Will Be One, it is worth noting that this set brings a variety of new toys for preexisting decks to play with. Grixis seems like the clear winner here with the fastlands and Kaito, Dancing Shadow, but I do think there are other cards that could make an impact on the format. Mono-White has some new options as well.

With these two top-tier midrange strategies gaining more options, I’m skeptical if other strategies can keep up. While I do think Esper and other archetypes will exist in Standard I’m going to put them to the test once I can start playtesting with these new cards. In the end, who knows? We still have a big chunk of the set that’s yet to be spoiled!