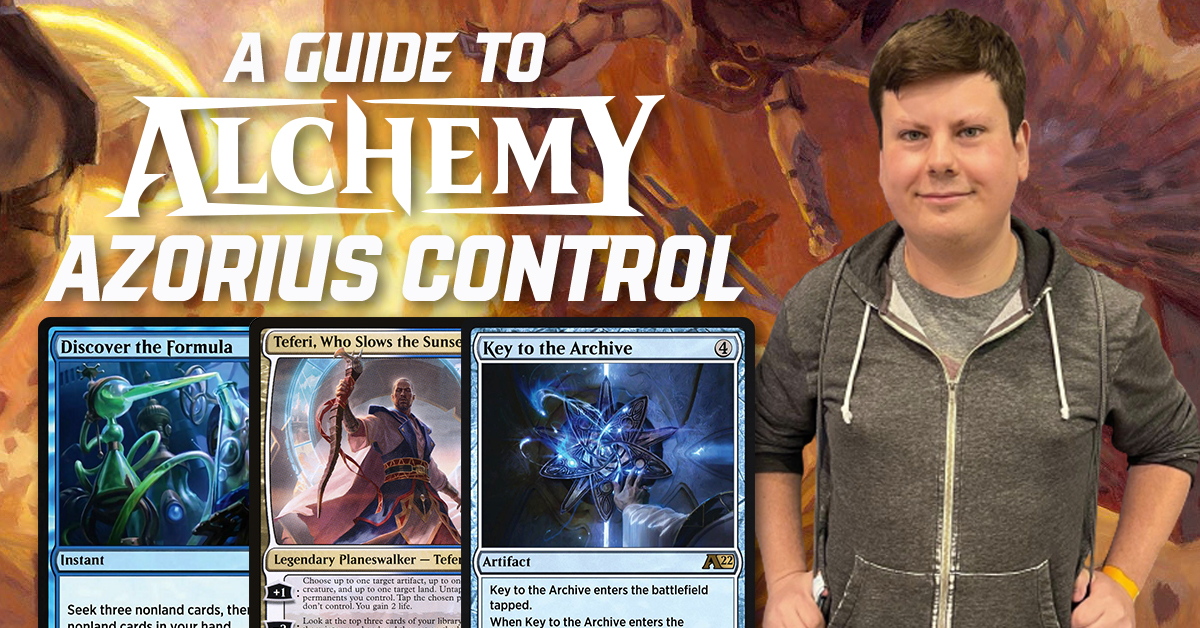 In my last article I wrote a primer on what cards from Alchemy: Innistrad I expected to make a splash in the format. After some tinkering and research, I found a deck that I thought I’d never get the chance to play again in a Standard(esque) format again: Azorius Approach.

For those of you who don’t know, one of my Magic ‘claim to fames’ is being the first person to Top 8 a major competitive event with Approach of the Second Sun. During the Starcity Games Syracuse Open weekend back in 2017, after sadly scrubbing out of the Modern Open with Burn, I was gifted this decklist Saturday night from a dear friend of mine:

My most powerful asset the Sunday Standard Classic was the element of surprise. A deck like this hadn’t been built before in the Amonkhet Standard meta, and I caught multiple people off guard on my journey to Top 8. Although Carmen Handy crushed me in the quarterfinals, I had a blast playing the deck and have since tried to make it viable in both Historic and Pioneer.

While Approach of the Second Sun isn’t actually legal in the current Alchemy format, there is one way you can get access to it…

Enter: Key to the Archive (and friends)

In my article last week Key to the Archive was one of the cards I mentioned in passing as a viable control card, but I failed to realize its full potential at the time. While Key can certainly be hit or miss, the majority of the time you’ll find a valuable spell in either Wrath of God, Demonic Tutor, Time Warp, or Approach of the Second Sun. Even though you have to take a whole turn usually to cast Key, there are multiple ways to effectively utilize it.

There’s a lot going on this decklist, but don’t worry. I’m here to give you the scoop on what makes this deck a great contender in the Alchemy format and what tips and tricks you’ll need to know if you want to climb the ranks of the Alchemy ladder. It’s worth noting that this deck is more of a Best of One deck, but we’ll get into some Best of Three options later on.

This deck essentially acts as a classic control deck, but leans on the power of Teferi, Who Slows the Sunset and Key to the Archive. Your primary goal when piloting this deck is to put these two permanents in play without dying first. Once Teferi and Key are active, you’ll be able to pull ahead on mana and eventually having a clean lock on the game looping Witness the Future.

It’s easy to get bogged down in the details, so let’s take this one step at a time. In a given game you’ll lead on your early interaction, Portable Hole, Sunset Revelry, and Fateful Absence, to put yourself off pressure. On turn three you’ll be able to Divine Purge your opponent’s board of creatures, and hopefully the leftover Clue token from your Fateful Absence. On turn four you’ll cast either Key to the Archive or a Teferi to find a Key. Once you land the second combo piece it’s mostly smooth sailing, as long as both stay in play.

Once you’re ahead on mana the world is your oyster. You can start double-spelling in a turn, using your card draw spells like Memory Deluge to find meaningful interaction in the form of wraths or more Key to the Archives to search for either Time Warp or Approach of the Second Sun. With Witness the Future you can endlessly loop Divide by Zero back into your deck to keep bouncing your Key to the Archives to eventually draft Approach of the Second Sun to end the game.

After playing this deck a ton on ladder I jotted down some thoughts I had on card choices and card interactions:

While Seth’s list is solid, there are a couple of important changes that I made to the deck. While you can’t be positive against every matchup in the meta, there are ways to protect yourself from some prevalent cards you can expect to face on the Alchemy ladder.

Here’s what I’m currently playing in Best of One:

Alchemy Azorius Control - Best of One

4
Teferi, Who Slows the Sunset

2
Portable Hole
4
Key to the Archive

Best of One versus Best of Three

While I do think this deck is a serious contender in the current Alchemy meta, I think it’s a far better choice for Best of One than Best of Three gameplay. Best of One heavily favors aggressive strategies, and with an appropriate amount of interaction with your wraths and cheap White spells, you can keep these decks at bay. Best of Three, however, showcases more powerful decks such as one of the format’s frontrunners – Izzet Epiphany.

The Izzet Epiphany matchup is honestly pretty awful for us. Izzet has the capability to discount its important spells such as Alrund’s Epiphany, Discover the Formula, and Unexpected Windfall with Gesitchanneler. Izzet also gets the upper hand with its ability to loot. Through cards like Unexpected Windfall, Izzet can churn through the deck faster, discarding useless removal spells while Azorius can get stranded with cards like Sunset Revelry and Doomskar.

Another issue is that Azorius doesn’t really get a lot of strong sideboard cards. Black-based control decks get Duress and Go Blank while Azorius has to settle for more countermagic. If you wanted to adjust this list for Best of Three, however, I’d include countermagic in the form of Negate and Test of Talents, threats in the form of Iymrith, Desert Doom and Hullbreaker Horror, and more creature removal in the form of an extra Divine Purge.

It’s worth noting that I think there’s also a version of this deck that includes cheaper spells such as Consider and Fading Hope and utilizes Lier, Disciple of the Drowned. However, Lier disables your plan of endlessly looping so I ultimately believe Lier is much better suited in a Dimir deck with Hullbreaker Horror at the top. I do want to try out builds with Consider and Fading Hope over Sunset Revelry and Portable Hole, however.

Overall, this deck is a total blast to play. I was skeptical of the Alchemy format at first, but I think it provides strong gameplay and a unique way to play Magic. Azorius Control is a deck that relies on skill, prompting you to sequence your cards correctly and plan multiple turns in advance. While the core of this deck revolves around Teferi and Key, the deck is definitely customizable and can be tuned for the Best of One or Three and evolving metagames. If you love casting Approach of the Second Sun as much as I do then this deck is for you.