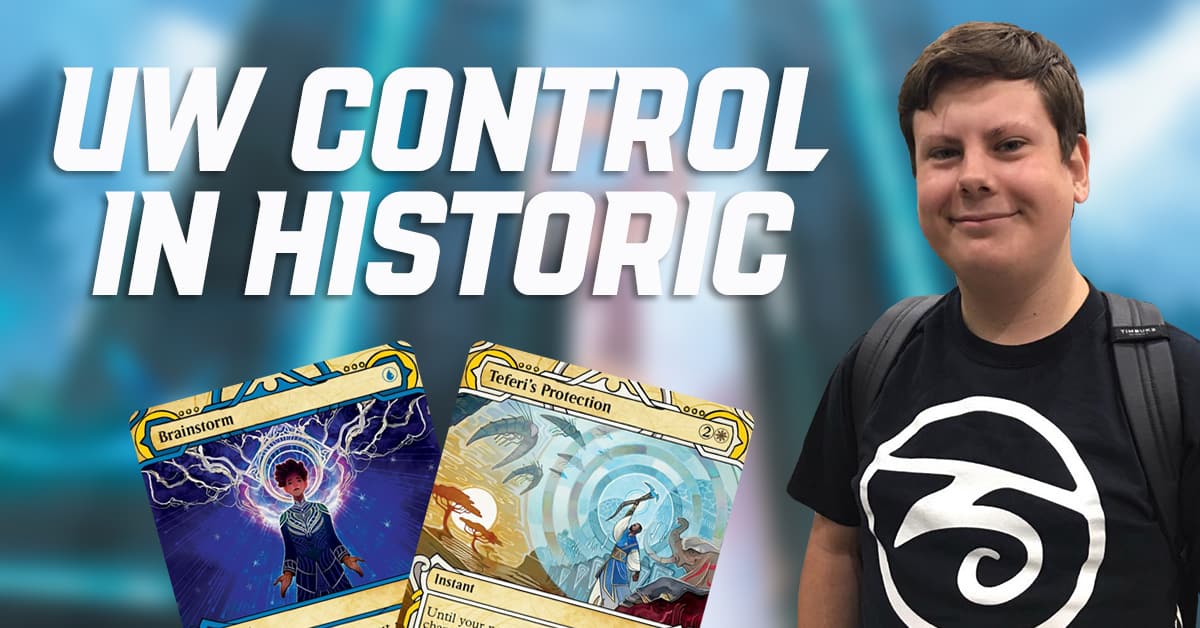 In the last Strixhaven Qualifier Weekend after a strong 7-1 start on day 1 I was posed to take down day 2, but after falling prey to multiple Toski, Bearer of Secrets, some poor plays and deckbuilding decisions I found myself 0-3 on the day. I was prepared to retire (temporarily) from my competitive Magic endeavors until I happened to check my email and found out by day 2’ing the March qualifier I had qualified for the April qualifier. Lucky me, I guess.

Unfortunately, I’ve only played one Historic tournament lifetime. I was visiting a friend in Charleston and had very minimal time to test, so going back to my roots I scanned the internet for a myriad of well-placing Azorius Control decks from the Kaldheim Championship and went to work.

The tournament went pretty smoothly, but after nine total matches I lost in the last round to end on a truly devastating 6-3 to miss day 2. Certainly not my best performance, but far from my worst. I was even a little surprised I was able to get so close to day 2 having only one Historic qualifier weekend prior, especially since I had focused so much on Limited the last two months.

Here’s what I ended up playing:

While I wish I could write more about this specific build of the deck going format and Historic as a whole, as of Thursday, the format will be completely turned on its head.

Strixhaven introduces almost 60 new cards into Historic, all spells from Magic’s past. With iconic Modern and Legacy cards joining the fray, such as Brainstorm, Faithless Looting, Lightning Helix, and Time Warp. While it’s not entirely clear which decks gain the most from the set’s release and which new strategies will take hold of the format, Izzet Arclight Phoenix is a clear winner of the addition of Faithless Looting and Brainstorm (which the deck never even had access to in Modern!).

Look, I love control decks, and I’m hopeful Azorius Control specifically will find a place in the new Historic format. I want to outline both cards that will be considerable additions to Azorius, regarding both their overall power level and how they interact with potential other decks in the format. Let’s jump in, shall we?

Brainstorm, Magic’s most iconic cantrip is an addition to Historic that I’m honestly shocked by. Brainstorm and Brainstorm-effects combo with library shuffle effects, specifically off fetch lands, allowing you to considerably alter the state of your hand in a given matchup. Drawing three new cards while pitching two un-needed ones can be life or death in certain matchups. In Azorius specifically Fabled Passage makes for a nice shuffle-enabler as does Field of Ruin.

Teferi’s Protection is actually a card I’ve never cast, since it’s only been legal in Legacy and Commander. I’m not sure what implications this card has but it’s a great use of your Teferi, Hero of Dominaria “untap” mana. This card might end up being a crucial answer to cards with potential one-turn kills, such as Izzet Phoenix, Goblins, and Embercleave decks, so I could see having access to it being a major advantage.

While Counterspell is banned, we get access to Memory Lapse as a two-mana counter. Lapse is another card I’ve actually never had the opportunity to cast, but it having a similar effect o Remand and putting the card on top of the library instead of back in hand makes for an extremely efficient two-mana counter. I’d be more than happy to have this in hand on turn five after untapping two lands with my Teferi.

Looking at Izzet Phoenix, there are a couple of cards I want to highlight that Azorius has access to that can help even the playing field:

Narset isn’t a new addition to the Azorious deck, but I’d highly recommend playing 3 if not 4 copies. When both Narset and Phoenix were legal in Standard I remember playing games as Esper Hero and Control where I would cast a Narset and never activate it, forcing my opponent to find enough damage to put on the Narset while at the same time blanking their draw spells.

I’ve always loved playing a Settle in every Azorius deck I register, regardless if I’m playing Modern or Pioneer. The surprise factor has always been immensely valuable to me, and in open decklist formats playing one copy can put mental strain on your opponent. Settle is one of the few favorable ways Azorius can interact with multiple Phoenixes at instant-speed.

Rule of Law was a card that won me one of my Auras matches in the qualifier weekend. Rule combined with Narset is a sure way to put your Phoenix opponent in a bind. Rule is also considerably harder to remove than a Narset for the Phoenix player, and shuts off both their Arclight Phoenix triggers and their Stormwing Entity discount.

This is a card that I’m not sure is good enough to defeat Phoenix, since it is a Sorcery, but like Settle the Wreckage, it’s another way to deal with multiple permanents at once. Since the Phoenix decks might only play 2-3 different creatures total, it can be a sure way to clear a board for only two mana. It’s a cheap answer that might turn the tables when you have five mana and a Narset in hand.

This is a new addition via Strixhaven that might match up well against some of the more notorious instants and sorceries in Historic. This is a primary answer to Emergent Ultimatum, but it also might be reasonable versus Faithless Looting, robbing your opponent of some of their resources for the long game. It also lines up well against potential decks with Grapeshot or Tendrils of Agony as their win condition.

Taking all of these cards into account, and focusing on an early metagame where Phoenix may in fact be the defacto best deck, here’s what I’m going to jam:

I believe this is a good starting point for the deck. It takes into account the hallmark cards of previous well-performing Azorius cards while testing out the power of Brainstorm and Memory Lapse. With all of the cycling cards I’m tempted to run a copy of Search for Azcanta. Memory Lapse isn’t a hard counter which is worth noting, so the deck may want access to a Dovin’s Veto or Saw it Coming as well, although the sideboard contains a couple options to choose from. Going forward I want to continue to test the Strixhaven Archive cards, looking at potential Jeskai builds with Lightning Helix and Electrolyze.

Only time will tell if Azorius is a prime contender in the Strixhaven Historic metagame. The deck’s contents will ultimately revolve around which decks are dominant. If Izzet Phoenix takes hold of the format I’ll go all-in on some of the more potent sideboard cards such as Rule of Law. However, if the format remains much more diverse you’ll have to adapt accordingly. I do think that with the addition of Memory Lapse and Brainstorm Azorius Control has what it takes to take on some of the titans of the new format. Azorius has a lot of tools at its disposal, but the question remains if it is efficient enough to fight some of the emerging strategies Strixhaven has brought.