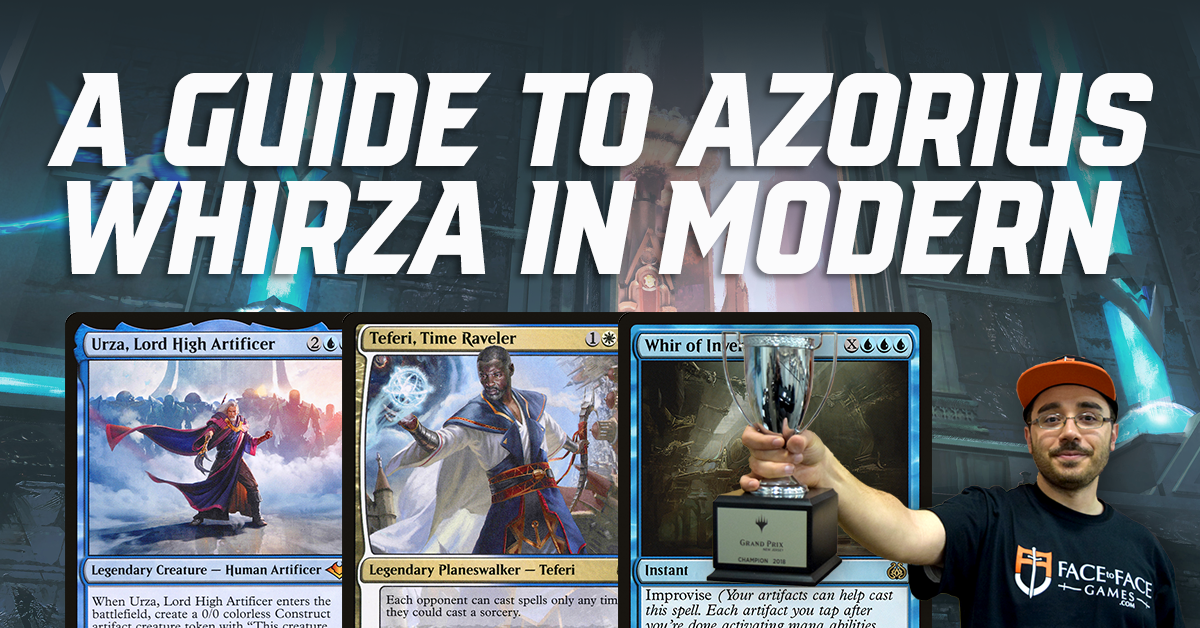 I want to say it was late January or early February of 2019, right before the Covid outbreak. I was playing a Team Constructed SCG Open with the spiciest of squads: Corey Baumeister on Standard, Pete Ingram on Pioneer, and myself on Modern.

I was still actively streaming Modern at this time. Since we were between Horizons sets, Modern had been a bit stagnant. Opal had been banned around that time and Urza, High Lord Artificer, had been relegated to the back of the binder for most players.

I was determined (and somewhat stubborn) to make Urza work. So week after week on my stream I had been crafting a Dimir Flash control/combo version of the deck. Aided by Mystic Sanctuary the deck felt like a two-card combo, with one part of the combo (Whir of Invention) being at flash speed. Did someone say Splinter Twin?!

For those curious, here’s what that deck looked like:

There were fifteen rounds of swiss and three more rounds in the top 8, of which this trusty sidekick of a deck only lost one match for me. The kicker for me was that I probably could have won that one loss as well if I had played tighter. We won that tournament and a new archetype entered the Modern scene, Dimir Whirza it had been titled.

I feel like I just re-lived some glory days in the times before the end times (covid). The point of that rambling introduction was to bring you to the next evolution of the archetype. Modern has been completely turned on its head since the release of Modern Horizons 2. During this time Arcum’s Astrolabe as well as Mystic Sanctuary got the boot.

This archetype managed to pick up a few friends along the way however in Portable Hole and Counterspell. One of the many ways to lose matches before was to an unanswered Rest in Peace or even worse – Stony Silence. Having a tutorable one-mana answer to these hate cards and also a method of early removal that also enables Whir of Invention is huge. Huge enough that I abandoned Black (almost) and opted for White cards instead.

Having Counterspell as a good/cheap interaction spell improved upon having to overpay for Cryptic Command. The drawing of the extra card was nice, but the high converted mana value was a regrettable price to pay. Having just one artifact on the table and then playing Urza on turn four is usually enough to have counterspell ready as backup.

Since we are on White cards we also get to play Teferi, Time Raveler, AKA the best planeswalker in the format. The Destroyer of Cascade decks! We also get Sunset Revelry, the very specifically targeted Mono Red hater. Then we also have Fateful Absence, which conveniently destroys some pesky planeswalkers. Karn, the Great Creator had been a thorn in my side for far too long up until this point. Now we have an excellent answer to Karn that’s also a flexible removal spell as well.

Let’s look at the deck so we can discuss the card choices a little more:

Let’s start with answering the easy questions like “Hey Eli, how come no copies of Emry?” As you can see we are not playing creatures. Urza is the exception because s you can also win through removal spells if you’ve put Thopter Foundry and Sword of the Meek onto the table. Even against one to one removal spells, Urza still ends up being a two-for-one in terms of card advantage. Also the fact that it generates extra mana, means you can protect it with countermagic at later stages in the game.

“Where’s the fourth Mishra’s Bauble?” Well, we need enough artifacts to enable Metallic Rebuke and Whir of Invention. We have exactly twelve artifacts that cost one or zero mana to do so. We can get by with one artifact. Mishra’s Bauble does not provide much extra value in the deck. Therefore, we are down to three copies to make room for other important spells.

“Why is there one copy of Wishclaw Talisman?” Well sometimes you have Sword of the Meek, Thopter Foundry, and Whir of Invention. You really need to find an Urza to win. Wishclaw allows you to do so, but also lets you get a free tutor with the aid of a Thopter Foundry already on the table. As people born in my generation may say “It lets you be cheeky.”

“Why is there a second copy of Sword of the Meek?” Well Prismatic Ending is a card and I’d like to be able to run it out on turn two without worrying about losing to Ending on the spot. This may feel a bit loose and maybe it is. However, the extra copy is rarely bad unless you draw both or too many Whirs and not enough enablers. Luckily, you’ll rarely find yourself in that spot.

Then there’s the harder questions to answer, like “No Urza’s Saga?!” If we add in four colorless producing lands then we also have to change the mana to make our six triple blue spells effective. You could try to make it work, but essentially it means we cannot have both. Unless we want to lose a great deal of momentum in our matches.

“Why so many random one-ofs?” Well that’s just me, get over it. Here’s how it works in my head though. Nihil Spellbomb is the best graveyard hate card because it cycles and sacrifices to Thopter Foundry well. However sometimes grabbing a Relic of Progenitus works better in the long game. The Aether Spellbomb is good because it saves Urza, but can also bounce a huge Murktide Regent. Ensnaring Bridge isn’t good anymore because of the existence of Prismatic Ending, and usually fetching out Thopter or Sword is more effective.

Ulamog, the Infinite Gyre in the sideboard is a hedge against Mill, but it’s also effective against Azorius Control. It’s more easily castable than Emrakul and effectively an answer to sticky permanents while “going off.” Void Mirror is also in there because take that Tron!, but also it’s good against Ephemerate Elemental shenanigans. Ratchet Bomb is a bit cute, but it’s an answer we can Whir for while dodging Pithing Needle and Engineered Explosives at the same time. Damping Sphere is another take that, Tron! Piece, but it’s also effective against fringe matchups like Storm and Amulet.

Grafdigger’s Cage is solid against Chord of Calling type effects, but also great versus Dredge. The variety of the sideboard cards is excellent when you are playing four copies of a tutor spell. Pithing Needle is for troublesome planeswalkers, but sometimes I I use it just to name Devoted Druid. Look, I get paired against Devoted Druid decks way more than I should, ok?. Aether Gust works around Cavern of Souls when they go for the Primeval Titan kill. This may only buy you a turn, but sometimes that’s all you need to assemble your combo.

Okay, I think that’s enough for the deep dive into the deck and the rationale of card choices. You’re ready to battle. Last piece of advice: do not over-sideboard. Know which cards you cannot go too low on and keep in mind your maindeck artifact count. Know when countermagic is good and when it’s least effective. Know when to go reactive and when to be as proactive as possible. If you can keep track of all these things, you’ll have the road to success paved for you.

Until next time, thanks for reading!