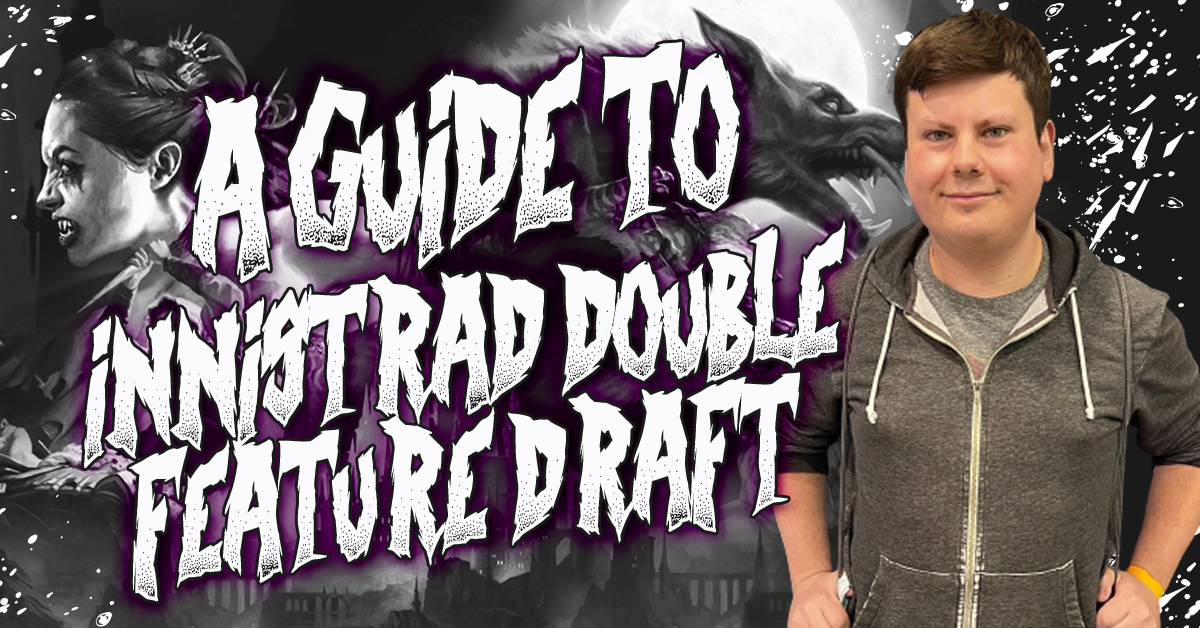 It should come to no surprise that I’m more invested in Limited than any other format right now. While I’ve had success with Innistrad: Crimson Vow, Innistrad: Midnight Hunt still remains my favorite Limited format of the two. I love Midnight Hunt so much more than Crimson Vow due to the ample amount of removal found at common and uncommon and how underpowered most of the rares are. Midnight Hunt also had lots of fixing, so it was easy to get away with building three, sometimes four-color decks. Ultimately, both formats have been very fun to play and very skill-testing (save for a few games that end on the spot due to certain Vow bombs…).

Innistrad Double Feature is a special draft set that releases both online on Arena and in paper this week. Each booster pack includes a random assortment of cards from both Innistrad sets, the catch being that packs will have two rares instead of one. On Arena in particular, Double Feature will be run as a ranked Best of One Draft option from January 28 to February 10. This means for two weeks you’ll have a competitive option to draft the set.

More details can be found here.

That being said, having a firm grasp on both Innistrad formats will allow you to take advantage of this special format and boost you to Mythic in no time! Look no further, because here’s what you need to know about drafting Double Feature, whether it’s in-store or on MTG Arena.

The first thing you need to know about the format is its consistency. While in Midnight Hunt you may have been drafting dedicated Dimir zombie-themed decks with lots of Decayed cards, in this format you’ll find less Decayed cards on average. The same goes with drafting a dedicated Blood deck. The first real winner of the format is Azorius Spirits, since Disturb is a mechanic that was featured in both sets.

Going off of my last point it’s also vital to know how certain mechanics synergize with each other over both sets. The prime example of this is Exploit and Decayed. It’s no wonder that Decayed wasn’t included as a mechanic in Crimson Vow. Exploit is just a busted mechanic when you get free resources to exploit that are trading for actual cards from your opponent. In Crimson Vow you had to work to draft a workable Exploit deck, making sure to pick up both enablers such as Doomed Dissenter, and payoffs such as Rot-tide Gargantua.

However, Double Feature turns this completely on its head. Imagine countering your opponent’s spell with a Flip the Switch, then buying it back the following turn with a Repository Skaab – now that’s value.

Exploit and Decayed are clear winners of this format. Going forward however, there are tons of cards that interact profitably with each other. Take Sigardian Paladin for example. This card benefits greatly off of drafting cards like Homestead Courage and Hound Tamer.

For a more detailed list of some cool card interactions, scroll down!

Another lesson to learn about the format is to prioritize your rares and powerful spells. Since this format is a random mashup of both sets without curation, it means that you should focus on the power of your deck rather than trying to make certain synergies work. Since packs contain two rares instead of one you’ll have more chances of opening a bomb. Let your rares be the guiding light of your draft as build-arounds. I think it’s rare that you’ll first pick a common removal spell or gold uncommon.

While there are powerful cross-synergies in this format, due to the randomness of the packs and the double rares, make sure to prioritize the powerful cards first before jumping into a specific archetype. If you’re drafting in paper I’d also keep an eye out for what rares you might be passing around the table, and what rares you might want to hate pick.

While Crimson Vow only had a couple of fixing cards, most notably Evolving Wilds, Weaver of Blossoms, and Foreboding Statue, there are a multitude of fixing cards in Midnight Hunt. Midnight Hunt also gives access to Evolving Wilds, but includes Path to the Festival, Crossroads Candleguide, Rootcoil Creeper, Eccentric Farmer, Dawnhart Rejuvenator, Jack-o’-Lantern, and Moonsilver Key. This means that on average you’ll see more fixing spells than in Crimson Vow. With two rares per pack and a bevy of fixing, it’ll be easy to splash either powerful rares or key removal spells.

Speaking of removal – don’t skip out on removal! This usually goes without saying, but removal is going to be a key piece of this format due to the amount of rares that will be opened at each draft table. One big difference between Crimson Vow and Midnight Hunt was the availability of removal at common and uncommon. While Crimson Vow had a decent amount of removal spells at these rarities, one major issue of the format was that the removal was very narrow and situational.

One example of this is Halana and Alena. I remember in my first game of the format during prerelease, my opponent had a turn four Halana and Alena. My deck (and pool) had no spot removal for this card outside of Valorous Stance, and my other key piece of removal was double Sigarda’s Imprisonment. This meant the only way of cleanly removing this bomb rare was to spend eight mana total for an Imprisonment – not a good trade off!

One positive about Midnight Hunt as a format was the availability of removal at common and uncommon. The prime removal spells of the format in Black are: Infernal Grasp, Olivia’s Midnight Ambush, Defenestrate, and Foul Play. You also have various more narrow removal spells in the other colors, such as Clear Shot, Candletrap, and Burn the Accursed to name a few.

In Double Feature I would highly prioritize hard removal spells. In a format where there are more bombs going around the table cards like Defenstrate, Infernal Grasp, and Hero’s Downfall will be perfect weapons at taking out bombs such as Halana and Alena, Tovolar’s Huntmaster, or Olivia, Crimson Bride.

This is an important lesson when playing this format – know your combat tricks! Double Feature draft has a pretty immense card pool, meaning there’s way more combat tricks to play around on average. If you’re really looking to make a splash in this format make sure you familiarize yourself with both sets’ spoilers so you can get a potential read on your opponent if they have open mana. You won’t be able to always play around every single trick, due to the nature of the format, but you’ll at least have a step in the right direction memorizing both sets’ card pools.

As an avid drafter I’ve been lucky enough to cultivate a great Limited group in the north Los Angeles area. Chaos Draft is usually the format of choice for late night shenanigans, and I’ve found the format to be a blast. The key pieces to any Chaos deck that I’ve found are power cards, removal, and fixing, all in that order. While Double Feature will certainly have lots of cards that synergize with each other, either from the same set or overlapping, taking the Chaos approach is a safe bet in this format.

Last week in a Chaos draft there was a Crimson Vow in the pool. I speculated on a Biolume Egg late in pack one as I began the draft in Dimir colors. I luckily opened Cavalier of Knight in Core 2020, pack two, and gained incredible value from this two-card combination. This is an example that’s actually completely applicable to Double Feature. Say you get passed a Biolume Egg in pack one. While you’ll most likely be able to pick up an Exploit card somewhere in the draft, you can also be on the lookout for cards like Ecstatic Awakener, Corpse Cobble, or Eaten Alive from Midnight Hunt.

Before we wrap things up here’s a quick easy visual guide for some of the interesting interactions between cards from Crimson Vow and Midnight Hunt that are sure to show up in your Double Feature drafts:

Here are a couple of interesting card interactions that will show up in Double Feature Draft! Some cards that didn’t see much play get a huge boost with the marriage of these two Innistrad Sets.

Consuming Blob is pretty weak versus Honored Heirloom, which appears at common.

Flashback Spells are great spells to discard to Blood tokens if you can’t or don’t want to discard a land.

Look out for high toughness creatures from Midnight Hunt, such as Bird Admirer and Drownyard Amalgam if you pick an early Catapult Fodder.

Many zombie cards from Crimson Vow interact well with Decayed tokens, such as Archghoul of Thraben and Chill of the Grave.

In Double Feature draft Child of the Pack and a flipped Kessig Naturalist are best friends!

I’m very excited to draft the horrors that lurk in the night one last time in Innistrad: Double Feature. Innistrad remains my favorite plane in Magic to date, and I’m so happy that I’ve greatly enjoyed both Limited formats and had some competitive success. I hope you found this guide helpful regardless of what version of Double Feature you end up playing. Feel free to tag me in some of your sweet draft decks!

As always, thanks for reading.