A Guide to Izzet Indomitable Creativity in Modern 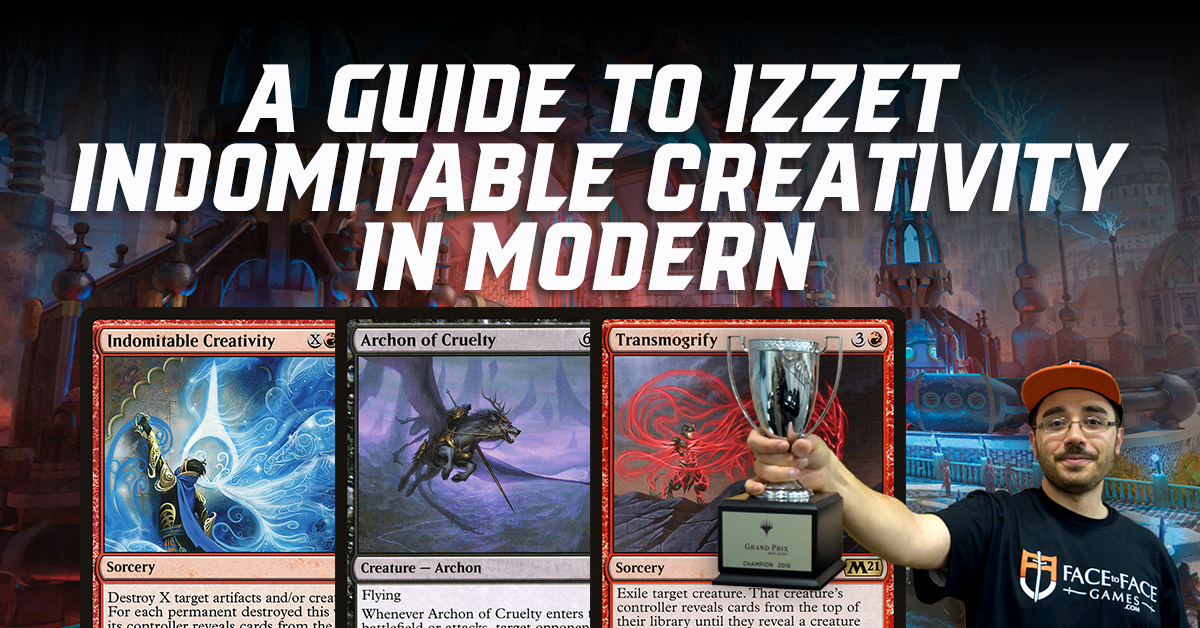 Indomitable Creativity has been shaking up Modern in a big way. The world has seen it go from being a fringe deck to Tier 1 spice in a short time frame. Many players originally built it as a 5-Color variant, but ultimately these versions had issues with consistency. In a world of Death’s Shadow decks, inconsistency is easy to punish.

Full disclosure? Indomitable Creativity more of a Grixis build than Izzet. Theoretically you shouldn’t need to hard cast any Black cards in the maindeck to win though. The Blood Crypts are mostly free and help you to cast Archon of Cruelty or Leyline of the Void in games that go long.

As always, let’s go over the decklist so we can dig into the deck some more:

Valakut Awakening is some of my newer tech. It’s great for shuffling Archon of Cruelty back into the deck if you draw too many copies. Awakening has been a powerhouse and I’m curious if this list deserves more than one copy. Transmogrify is a spicy piece of tech that essentially acts as your Demonic Tutor. The thought process here is that there will be games where you don’t end up casting an Indomitable Creativity. It helps to have a slightly less-powerful backup win condition. The major weakness of Transmogrify is that it can only target creatures and is a singular target. This means that it’s easy to disrupt.

Usually this deck wants to jam an Archon of Cruelty as soon as possible. However, you should try to save up for an Indomitable Creativity that targets at least two permanents. You’ll often be victorious in these types of situations because everyone is playing Unholy Heat. If you draw two, they discard two, they sacrifice two planeswalkers or creatures, you gain 6 life and they lose 6 life. You’ll probably win through most board positions, despite how far behind you are.

Traditionally this strategy is weak to graveyard-centric decks because it is difficult to play a hate card that doesn’t mess up your Indomitable Creativity targets. Since we are already splashing Black for Archon of Cruelty why not also “splash” for Leyline of the Void. This card being able to take out top tier decks all on its own is a nice added bonus.

While we are talking about spicy sideboard cards, I brought an oldie but a goody back to play – Gigadrowse! This is my answer to those pesky Blue decks that don’t ever want to tap out. Forcing your Blue opponent to tap out completely while you go off is such a triumphant feeling. Alpine Moon is hardly a spicy inclusion, but necessary with Tron and similar style decks in the format. Alpine Moon is also great at dispatching Urza’s Saga decks.

Flusterstorm is for your combo matchups and Cascade decks. Dress Down is a flexible answer to some of the same types of matchups. Finally, Unholy Heat is an extra burn spell to help with aggressive matchups.

The mana base is traditionally this deck’s weakness because we need three Mountains to get the best value from our Dwarven Mines. So try not to find the basic Island early on with fetches. It’s more meant for after turn 3 or to play around a Blood Moon. Similarly, try not to use the clue token from Hard Evidence if you can help it, as it is typically the best target for Indomitable Creativity. In an ideal corner case, you can turn one cast Hard Evidence. Then on your opponent’s end of turn 3 you resolve Prismari Command to create a treasure token. Then you grab a Dwarven Mine and use the treasure to make Indomatible Creativity where X = 2 on turn 4. This helps you ramp faster to your combo.

Another benefit of this strategy is the amount of corner cases that come up durin gameplay. For example: using Prismari Command to draw and discard Emrakul, the Aeons Torn. This shuffles your graveyard back into your library and resets the amount of Archons in your library. Remand is another of those cards that has a lot of surprising utility. If they steal a spell with Ragavan and cast it, you can Remand it back to your hand and also draw a card. You can also do the classic trick of Remanding your own spell back to your hand if your opponent tries to counter it.

I actually helped a teammate in a GP win a match once by telling them this cool trick after they had cast a Lightning Bolt into their opponent’s counterspell.They were able to bounce it from the stack back to their hand, cast it again, thus removing multiple counters from their Thing in the Ice.

Another key piece of advice is how Indomitable Creativity interacts with Grafdigger’s Cage. It’s worded that the card gets put into exile and then into play. This means that Cage doesn’t stop a Creativity. Cage does however prevent Transmogrify, as that is worded in a way that matches Cage’s ruling. Indomitable Creativity is also an excellent way to transform your opponent’s Death’s Shadows into Mishra’s Baubles.

Against decks like Death’s Shadow, the Emrakul is typically the best way to ensure a win. It’s pretty rare you’ll want to board out Emrakul. A lot of people will try to Solitude your threats away so keeping the Emrakul to shuffle in your graveyard later might prove to be an efficient strategy in really long matches. This is relevant especially when you and your opponent play the “no tap out game.” I’ve enjoyed fetching out two Dwarven Mines to start chipping away in these cases. In these long games you can also rely on Lightning Bolt and Prismari Command to finish your opponent off instead of relying on enacting your combo.

That’s all for now, try the deck out! Feel free to reach out to me on social media and give me your thoughts. It’s still in its Beta infancy and has many more iterations to go before it’ll be optimal.