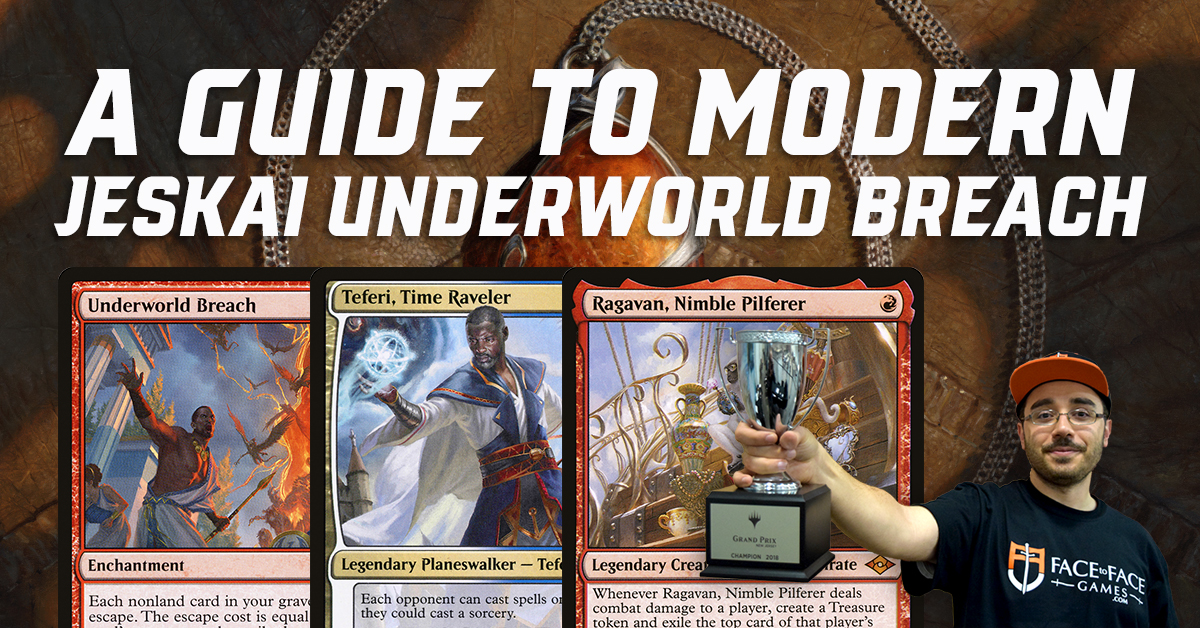 For those of you not as much in the know, Team BCW, in our short stint, was focused on trying to break Underworld Breach in Modern. In combination with Grinding Station, the deck would mill itself out and win with Thassa’s Oracle. The deck was an excellent performer for some time, but the occasional banning would usually throw the deck for a loop. However, now we’ve come full circle with the deck being a solid choice in the current metagame.

Breach is incredibly fun to pilot and offers a wide variety of angles. The difficult part of mastering the deck, however, is how to appropriately assess the various new cards that have been printed recently. There are various ways to approach building the right Breach configuration. Nevertheless, with the correct build aimed at taking down an expected metagame, you can find the path to success.

Fortunately, it seems that Breach is well positioned again! Yes, I know naysayers will come out of the woodwork and talk about how it has a weak Grixis Death Shadow matchup…and to be fair, they are not wrong. However, Grixis Shadow only makes up about 10% of the current Modern meta and the matchup is definitely winnable.

Let’s take a closer look at my current build of the archetype:

What I enjoy most about this deck is its built-in beatdown plan. Traditional Breach lists have been soft to Karn, The Great Creator in the past. Now, Karn decks only get to make one search before we can swiftly destroy the planeswalker. Typically, people will grab a Tormod’s Crypt and pop it in response to an Underworld Breach. If you’re new to piloting the deck – don’t fret. You can usually still easily win in these situations. Before casting your next Underworld Breach it’s important to cast Grinding Station first. When Station comes into play it actually triggers an untap off of itself. Then you can sacrifice whatever other artifact you already have in play. Then untap Station and do so again. This gives you the ability to play two spells out of the graveyard to start the chain going again.

Generally speaking, this deck either wants to go off fast, ideally before your opponent can setup their kill or the turn right before you expect to be killed. This gives you the most resources to play around any of your opponent’s shenanigans. There are extra tricks to be aware of as well. Keep in mind the fact that Urza’s Saga can net you two mana on the “go off” turn. It hits chapter three during your first main phase. Then, float a mana, search out either Mox Amber or Springleaf Drum (depending on what you have to work with).

The turn 3 win goes something like this: Turn 1 cast any generic artifact. Turn 2 cast Grinding Station. Turn 3 Land + Underworld Breach + 0 mana artifact. Begin milling yourself until you hit an Emry, play the Emry with Breach, and then mill more until you can play a Mox Amber. Mox Amber adds a Blue mana off of Emry, Grinding Station returns the Mox to the graveyard, Breach lets you replay the Mox. It’s not infinite mana, but it’s certainly enough to eventually play Thassa’s Oracle when your deck gets small enough.

If you’re comboing off on Magic Online, you’ll want to set your Grinding Station triggers to always say ‘yes.’ This shortcut will save you some time as it can be quite exhausting and repetitive to perform. Many opponents will not save you the trouble by conceding because they want to take a look at your whole deck as well. That being said, enacting it this way will help you better understand the fundamentals of the combo.

Dragon’s Rage Channeler is a powerful addition to the deck that I love. Ragavan is solid, of course, but in this particular deck, Dragon’s Rage Channeler can be a stronger turn one play.One of your most busted starts is: land + Ragavan + Mox + Dragon’s Rage Channeler. This start isn’t actually that hard to pull off and immediately puts a lot of pressure on your opponent. Dragon’s Rage Channeler’s Surveil ability is actually the clutch part here. The 3/3 flyer for one mana is just a sweet bonus. This lets you sift through the deck fast enough to find your combo pieces. One rule I abide by when playing DRC in this deck is: if it’s not a Breach or a land you need, put it in the bin. There’s always exceptions to this rule, however I’ve been rewarded by sticking to this philosophy. There are games where you’ll fill the graveyard and use a Breach to draw 7 cards off of a Mishras Bauble if you bin enough cards in the early stages of the game.

Sideboarding, like with all decks, can be difficult when first getting used to the deck. Over sideboarding can be self-destructive, but in some matchups we have a lot of options to bring in. For instance, Spreading Seas is primarily for decks with Urzas Saga, Tron Lands, and Valakut, the Molten Pinnacle, as I am sure most people are well aware. However, Spreading Seas is actually very powerful against Kroxa decks such as Grixis Death’s Shadow. There are times when it’s correct to cut the creature package from the deck, but these situations are few and far between. One example of this is if they’re playing Burn all of their removal is still present after sideboarding. On the flip side, if they are playing a deck like Grixis Death’s Shadow, their removal may get trimmed for other sideboard options. You can utilize the creature package in this matchup to power through some of their clunkier draws.

Metallic Rebuke gets people to make the most mistakes with sideboarding. This card should be brought in primarily against combo decks and decks with permission spells There are always fringe circumstances, but those are the typical prerequisites. When Rebukes come in, generally removal should come out in its place. This isn’t to say you don’t also bring in a card like Unholy Heat versus Amulet since easily killing a Primeval Titan is great. Nor is it the case versus a deck playing Karn, The Great Creator, as Unholy heat is a clean answer to the troublesome planeswalker.

Prismatic Ending is a nice answer to fast decks like Hammer Time and Death’s Shadow. The extra copy of Portable Hole fills this role as well. It’s nice to have Ending when you want to deal with a card like Chalice of the Void, but Portable Hole synergizes better with Emry and Metallic Rebuke. The Pyrite Spellbomb is nice for decks playing lots of creatures that cannot cleanly answer an Emry. It’s tutor able off of Urza’s Saga and can be used to machine gun down their creatures.It’s perfect against any Devoted Druid strategies or decks like it. Tormod’s Crypt comes in for any graveyard-based decks. Soul-Guide Lantern might be a more flexible option in this slot, but it’s nice to have an additional zero mana artifact for explosive Emry turns.

Some lists have opted to cut White in favor of going straight Izzet. There are advantages in that you have an overall smoother mana base. Unholy heat is a great card, but I find the White answers and Teferi, Time Raveler to be worthy splashes. Having Teferi buy you time while also protecting your combo goes a long way. There are games where people will have Nature’s Claim, and to play around it we generally have to cast Breach and then immediately cast a second copy of Breach out of the graveyard. Unfortunately, that’s often not feasible with mana limitations. Including White into the deck also gives us better tools to fight the Cascade matchup, which I’ve found to be worthwhile.

As always, thanks for tuning in readers! Give the deck a few runs before you start toying around with the card choices. You’ll notice others are playing only 3 Mox Amber and 4 Grinding Station.. I have found that having enough fuel to have strong early starts to be paramount for the deck’s success. Grinding Station, while important, can be replaced at first and then found by having a double Emry draw. Even if we mill Station away at some point, breach brings it back, so we really do not need to physically draw a copy. Oh and last thing – do not board out your Pithing Needle in matchups where it seems weak (Like versus Izzet). Usually your Urza’s Saga will tutor it out and shut down your opponent’s Relic of Progenitus or Engineered Explosives. Trust me, you’ll be quite happy you left it in.

See you next time!