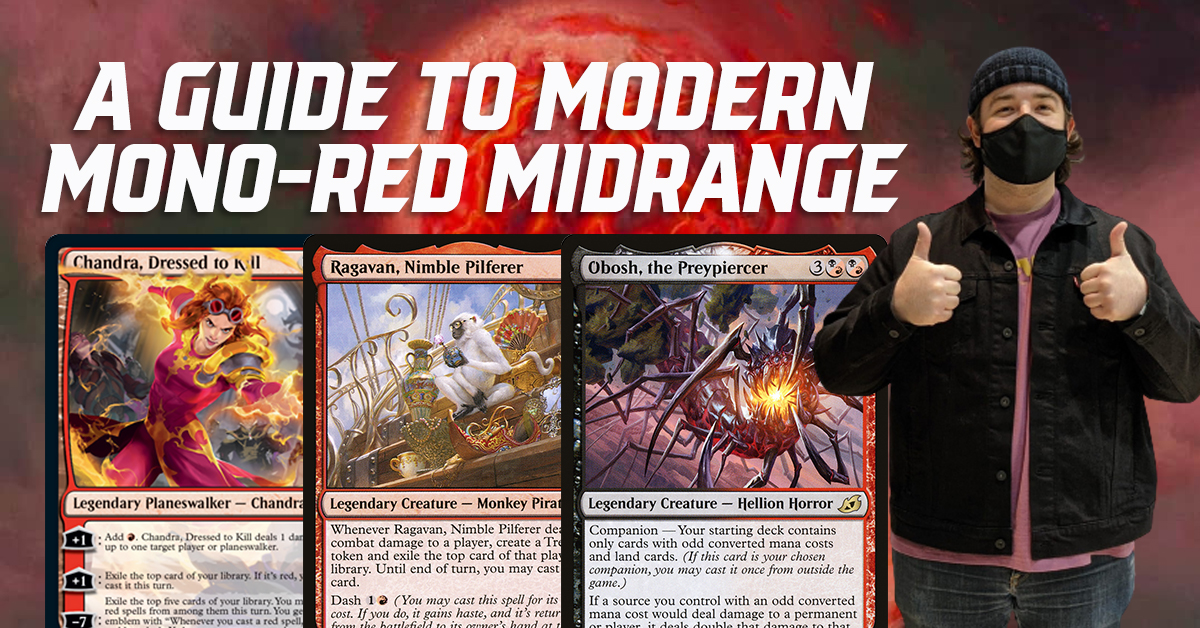 Since the release of Modern Horizons 2 the Modern format has been completely warped from what many once knew it as. Despite this, the format has been in a rather healthy place as of late, constantly changing from week-to-week as different decks fight for their position at the top of the metagame.

On Wednesday night, just days before the F2F Tour event in Montreal, I was playing some Magic Online leagues trying to settle on a deck for the weekend. During my testing, I was paired against a player playing a new version of Mono-Red Obosh, and was immediately impressed by the power of Chandra, Dressed to Kill. I did some digging and found a few different lists to base my ideas around. After tinkering with the deck through a few leagues, I found myself most impressed by the midrange, grindy version of Mono-Red that I ended up registering.

Chandra, Dressed to Kill, in my opinion, is the most powerful card to be released in Innistrad Crimson Vow. She quickly snowballs out of control, continuously providing you card advantage, accelerating you from 3 mana to 5 mana, bridging the curve in a deck that is unable to play 4 mana spells. One of the most powerful synergies in the deck is playing Chandra on turn 3, using her first ability to add R mana and deal 1 damage to your opponent, which enables you to play the spectacle cost of Light up the Stage in the same turn. Chandra consistently ran away with games throughout the weekend, and I found myself ultimating for the emblem in multiple matches, which often ended the game on the spot.

Aside from playing a slew of already powerful cards such as Dragons Rage Channeler, Ragavan, and Fury, the deck is also able to play main deck Blood Moon. This was one of the main reasons as to why I settled on Mono Red for the weekend. With Amulet Titan and 4-color value decks rising to the top of the metagame, Blood Moon is very well positioned to wreak havoc. Not only is it a card that can instantly win game 1s, it also forces your opponents to alter and slow their game plan in post sideboard games, which provides a lot of tempo advantage.

For a while I questioned if playing Obosh as a companion was worth the cost of not being able to play even CMC spells. However, Obosh has proved to be a sleeper companion that is a lot more powerful than it looks. Obosh allows your slew of removal spells to both deal with problematic creatures, as well as close out matches at lighting speed. Another benefit of having access to Obosh, is that it allows for you to always have a Red card that you can put in hand to evoke with Fury in a pinch.

As for the tournament itself, I managed to go undefeated in the Swiss portion on Saturday, locking first seed and losing my only match of the day in the finals of the tournament. I defeated a diverse array of strategies throughout the day, beating proven decks such as Izzet Murktide, and multiple 4-color value opponents. For the Sunday tournament, I was nearly able to secure a second Top 8 finish, losing an unfortunate win-and-in during the final round.

As for the sideboard itself, it plays very clean 3-4 of’s for consistent post board matches. Pyrite Spellbomb deals with Sanctifier En-Vec/Kor Firewalker, Shattering Spree beats Chalice of the Void and Urza’s Saga strategies, Soul-Guide Lantern helps slow down opposing graveyard decks, and Chalice of the Void counters Cascade decks such as Living End and Crashing Footfalls.

This is a matchup where you are the control deck. You want to slowly out grind them with removal spells, and your strength of card advantage. Shattering Spree does numbers against Construct tokens and Colossus Hammer itself, and Pyrite Spellbomb is an extra removal spell that is vital in answering Sanctifier En-Vec. Blood Moon has proven to be slow in testing, despite them being an Urza’s Saga Deck, and Ragavan is blanked by Ornithopters, Memnites, and various other cheap creatures.

This is a matchup that is very favorable. Having access to Blood Moon can be lights out in game 1. Amulet’s only reliable answer is playing a Dryad of the Ilysian Grove to fix their mana, which can easily be removed with Unholy Heat/Fury. Shattering Spree is your best post board option, as it can remove Amulet and help answer Construct tokens if they get out of control. If you find yourself in a position with a second Blood Moon in hand, I recommend waiting to play it as a backup, as having two on board has no benefit against Force of Vigor.

Between the two 4-Color value matchups, this is your best between the two. Having access to main deck Blood Moon allows you to punish your opponents greedy mana base. This is a match that plays out quite grindy, as similar to you they also have access to strong card advantage. Chandra, Dressed to Kill is extremely strong in this matchup, as your opponent often will have already used their Prismatic Ending on Dragon’s Rage Channeler/Ragavan. The only other real answer that your opponent has to Chandra is Fury the following turn, which means your opponent has to ignore your board of creatures. Shattering Spree comes in to help answer Chalice of the Void, as that card is able to shut off a large portion of our deck if left untouched.

Unlike the above matchup, the 80-card Yorion version has access to Abundant Growth, which results in Blood Moon being a less impactful card. Unlike the 60-card Kaheera version, the Yorion version favors a cheaper value engine between Abundant Growth and Ephemerate. Soul-Guide Lantern is a useful tool as it helps slow down the value engine of Ephemerate+Eternal Witness from snowballing out of control.

This matchup is quite favorable, as you have access to a lot of card advantage, and can often out- tempo your opponent. Blood Moon is excellent as it punishes heavy mana costs in Archmage’s  Charm, Counterspell and Supreme Verdict. Shattering Spree comes in to answer Chalice of the Void, as that is the card that hurts us the most in the matchup. An important line that comes up often in this matchup is after your opponent plays Teferi, Time Raveler. When they use the -3 ability to bounce one of your creatures, you can play Chandra, Dressed to Kill on the following turn and use her +1 ability to ping Teferi, taking it out.

This is a matchup that you are slightly favored against. This is another matchup where you definitely want to be the controlling player, using your removal to keep cards like Chord of Calling and Eldritch Evolution at their worst. Fury is an absolute all-star in this matchup, as it can wipe their entire board. Do not be afraid to be aggressive in dealing with their mana dorks. Soul-Guide lantern is the best card in post-board games, as it can help keep undying creatures dead. One interaction that comes up often is using Fury to take out multiple undying creatures, and using Soul-Guide Lantern to remove them with the undying triggers on the stack. Ragavan is at its worst in this matchup, and Pyrite Spellbomb comes in to replace our favorite monkey and provide more removal spells.

In: +3 Chalice of the Void +3 Soul-Guide Lantern +1 Obosh, the Preypiercer

This is a tricky matchup to navigate. The combination of Obosh+Fury can win you game 1, however surviving until that point can often be tricky if your opponent resolves multiple quick Crashing Footfalls. In post-board games, you have much more game as you have access to Chalice of the Void. It is important to note that when bringing in Chalice of the Void, you no longer have access to your Companion as it breaks the restriction of only having spells with an odd CMC. Soul-Guide Lantern is also brought in as Firebolt is at its worst in this matchup. This is a situation where our trusty Lantern is used more to help fuel Delirium and cantrip, however it is important to note that it can be used to stop your opponent from putting Crashing Footfalls back into their deck with Endurance.

This is a tricky matchup to navigate, as the games are often super close. Pyrite Spellbomb is necessary to answer Kor Firewalkers and Sanctifier En-Vec’s. Your best card in this matchup is Ragavan, as your opponent has to point their burn spells at your creature, or else Ragavan will start to snowball too much advantage.

I highly recommend that players try the deck out, as it is unsuspectingly powerful, and has a very consistent card advantage engine that Red decks typically lack. It is extremely grindy, and does not play like a typical Mono Red deck where you expect it to be hyper aggressive. Between Ragavan, Chandra, Light up the Stage and Seasoned Pyromancer, you find yourself constantly digging through 30+ cards in a game, and who doesn’t like seeing that many cards!?