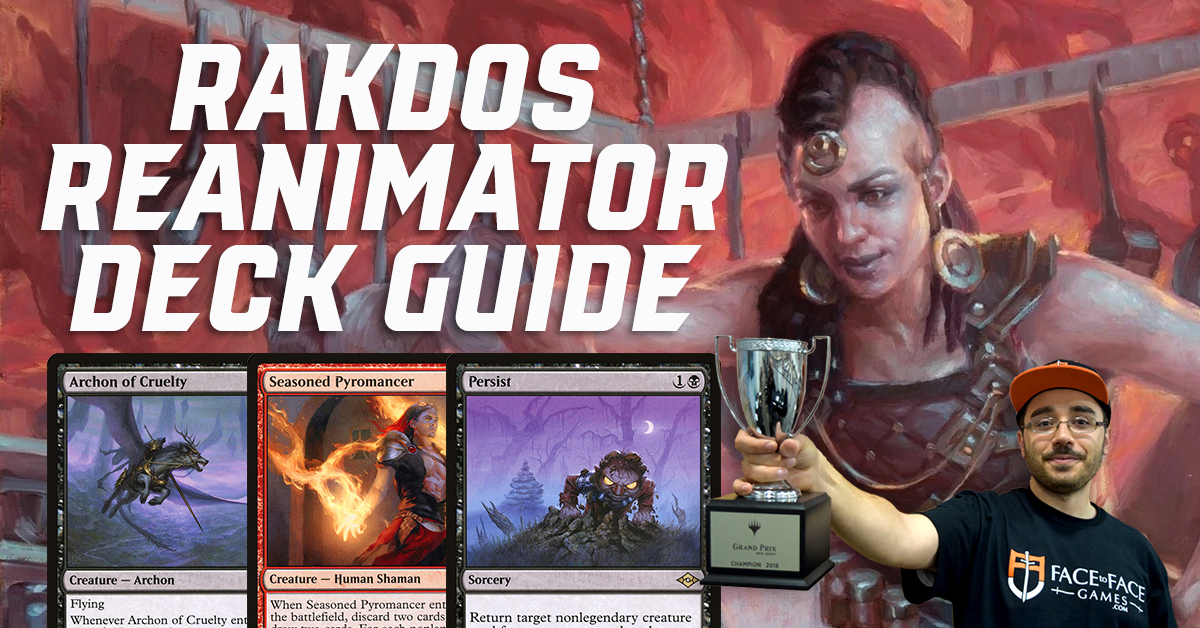 Ever since Modern Horizons 2 hit the streets we’ve seen a radical transformation of all the eternal formats. While I am going to be focusing on Modern for the purposes of this article, there are similar decks in Legacy that can borrow a lot from some of these innovations.

Coming to you fresh off a Magic Online league 5-0 with its debut performance, I present Rakdos Reanimator!

This deck is a ton of fun to play. It weirdly reminds me of when Survival of the Fittest and Vengevine were getting abused in Legacy together. Since you can go turn one The Underworld Cookbook, discard Archon of Cruelty, and then Persist it into play on Turn 2! This is cheat mode into getting free wins. The only problem is that it won’t happen very often. A previous Orzhov version of the deck did this and it was found to be somewhat unstable.

The problem with the original Orzhov builds was that the core of the deck wasn’t particularly enticing. Priest of Fell Rites died easily and was difficult to bring back for its Unearth cost. The Orzhov build did not have ways to sift through your deck or any real kind of backup plan in the face of graveyard hate.

So Rakdos 2.0 was designed with the weaknesses of the Orzhov deck in mind. I added in Urza’s Saga for another angle to attack from. Saga pairs especially well with The Underworld Cookbook for two reasons:

Red giving us Seasoned Pyromancer and Ox of Agonas is excellent because it allows us to churn through the deck while progressing our board state. Mishra’s Bauble gave very little additional boost to the deck previously other than to cycle, but now Bauble feeds the return of  Ox and also grows our Urza’s Saga Constructs. Discarding Ovalchase Daredevil to Seasoned Pyromancer is especially sweet since we can discard it to make an Elemental token and it’s very easy to return to our hand with Daredevil’s triggered ability.

Inquisition of Kozilek was a tough deckbuilding choice for me because most people would be running removal spells in this spot instead. Since Ragavan often requires immediate answering, it makes sense. However, the format seemed to favor Izzet decks, and thus, I had to take another deckbuilding approach to remove their countermagic. Then using Asmoranomardicadaistinaculdacar, I could catch up if I wasn’t able to just jam an Archon to steal the game.

I love that Archon’s ability can instantly kill a planeswalker. Unholy Heat is definitely an annoying cheap answer to Archon, but even getting the first ETB trigger off Archon can still be punishing – at least a three-for-one in terms of card advantage, a six point life swing, and overall a gain in tempo advantage.

Post-board games it’s important to watch out for cards like Sanctifier En-Vec, which royally beats down this deck. To that end we can use Kozilek’s Return to hopefully kill it or we can also Inquisition it before it hits the battlefield. Worst case scenario is that we tutor up Pyrite Spellbomb with Urza’s Saga to take it out.

We have a lot of Urza’s Saga tutor targets in the sideboard for various matchups. We Chalice of the Void against Cascade decks, Engineered Explosives against Cascade or Colossus Hammer decks, Pithing Needle for random threats you may encounter, and finally Nihil Spellbomb to counter the various other graveyard strategies in the format.

Next, we have one of my favorite new cards: Obsidian Charmaw. This big bad dragon solves the dilemma of our Tron, Eldrazi Tron, and opposing Urza’s Saga-based matchups. It can trade off in combat with a Thought-Knot Seer and is a viable target for Persist.

Since the Colossus Hammer decks are so fast and versatile, Kolaghan’s Command is the premier way to counter this matchup. Being able to kill Hammer and also take out a vital threat in one card is incredibly solid. Kolaghan’s Command is also just a fine card in a variety of other matchups.

If you’re picking up this deck for the first time, there’s a few things you should know. First, try not to over-sideboard. This is because the deck operates on so many different synergy angles and you’ll throw off the consistency if you bring in too many cards. Don’t bother sandbagging your Mishra’s Baubles, you should typically fire them off on yourself regardless if you have a fetchland or not. This will at least guarantee you get a useful scry.

Generally, you want to start off the game with a Rakdos dual land. This is so you can cast Seasoned Pyromancer on turn three with an Urza’s Saga in play. This allows you to churn through your deck while ticking up Saga. Cycling a Street Wraith also allows a turn one Asmoranomardicadaistinaculdacar. If you’re playing a matchup where you want to board out Asmoranomardicadaistinaculdacar, you can board out Street Wraiths as well – they tend to be a liability against aggressive creature decks.

When sideboarding you can be flexible with the cards Mishra’s Bauble and Ovalchase Daredevil. You don’t always need all four copies of Bauble and you should definitely board them out against decks that play Karn, The Great Creator. Ovalchase Daredevil’s primary use is to feed The Underworld Cookbook in grindier matchups. You can board them out against aggressive decks.

There are plenty of games where you’ll want to get Hellbent in order to abuse Seasoned Pyromancer or Ox Agonas so you can draw free cards. You can cast Persist on either creature just to generate some value. You’ll want to use The Underworld Cookbook’s sacrifice ability to bring back either Seasoned Pyromancer or Asmoranomardicadaistinaculdacar. With Asmoranomardicadaistinaculdacar and The Underworld Cookbook both in play they create a recurring short loop that allows you to dig for all four copies. This is useful when your opponent keeps trying to kill them.

That’s all for now, I hope you get to have fun with the deck. If you come up with additional innovations (which I know are out there)please feel free to comment or shoot me a message on social media about it! Rakdos Reanimator is my pet deck for now, but it’s a blast to play!