A Guide to Standard Rakdos Midrange 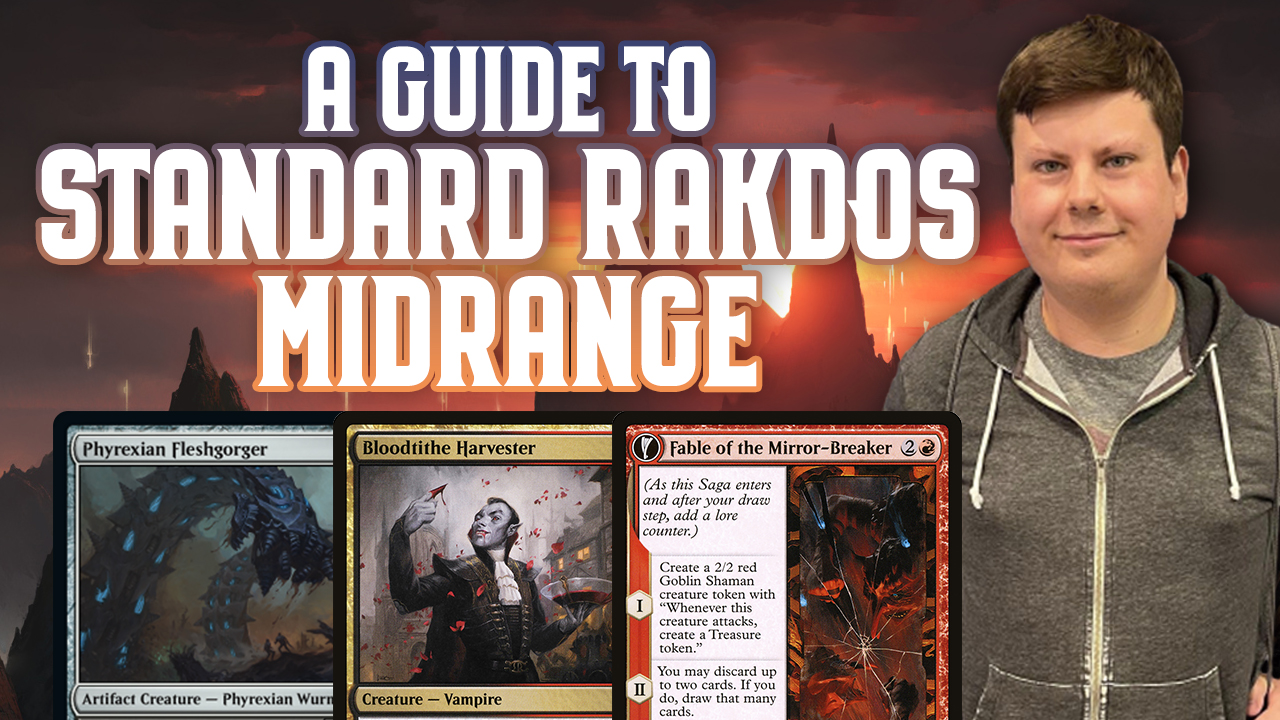 One of the most underplayed Standard decks in my opinion is Rakdos Midrange. While Standard has been dominated by Esper and Grixis midrange strategies, with Nathan Steuer winning the Magic World Championship with Grixis, Rakdos feels like a deck that has been sidelined in favor of the three-color version of the deck.

This is a thought I had the night before prepping for my Standard RCQ just a few weeks ago. I was conflicted on what deck to register. I had Grixis and various Azorius control cards at my disposal, but I couldn’t pull the trigger on a 75 that I liked. At around 6pm the night before the event I had a thought. Pioneer Rakdos is so good, what if I just built a Standard version of it?

While my list wasn’t revoutionary by any means I did curate it to combat the current meta. I wanted to mimic Grixis and Esper, but be a more beatdown version. By playing less painlands and having a more streamlined build I aimed to to take down these various midrange strategies. Luckily my thought process worked and I found myself wearing a “RCQ Champion 2022” lanyard at the end of the event.

Before diving into deck specifics, here’s what I played at that event:

2
Liliana of the Veil
2
Sorin the Mirthless

I took inspiration from Misplacedginger’s Rakdos Sacrifice deck that won the Standard challenge the day I built this deck. I copied the manabase, which included four copies of Ziatora’s Proving Ground – and copied over the singular Reposession. Reposession is almost like another copy of Sheoldred. I like that you can buyback and play a Sheoldred on turn five, in addition to getting back Bloodtithe Harvester or a Graveyard Trespasser.

At its best, Urborg Reposession also buys back a Fable of the Mirror Breaker, Reckoner Bankbuster, or Sorin the Mirthless. In more grindier matchups you get to get back draw engines and in the more aggressive matchups you can get back a threat or just a Sheoldred. This is a card I freely sideboarded out, but it was a role-player against the midrange matchups.

Ultimately I should’ve just been playing the full suite of this card, but that was before the World Championships happened and we got to see Nathan win with a whopping four copies maindeck. Invoke is definitely one of the most game-swinigng and powerful cards in Standard, and I think Rakdos is the perfect home for it with its streamlined mana base. Esper and Grixis can play this card but at the cost of a few points of life. Lucky for us, with the banning of The Meathook Massacre this card slots in easily as a replacement.

Trespasser is Rakdos’ Corpse Appraiser. While it doesn’t draw a card, you can have very aggressive starts with an Underdog or Bloodtithe on turn two followed up by this card. Trespasser is useful in turning off your opponents’ Corpse Appraisers and takes out Dennick and opposing Underdogs in the Esper matchup. The added bonus of the ward ability makes this card annoying to deal. Overall this deck has lots of ways of dealing incremental damage, and Graveyard Trespasser is one of the ways we can achieve that.

Liliana is another important part of this deck’s strategy. It can edict away an Underdog you can eat with Graveyard Trespasser. It nukes Haughty Djinn and Tolarian Terror from Mono-Blue and is a great follow-up on the draw against a Raffine. Ultimately Trespasser and Fable are more important than this card so you don’t want to play more than one or two copies.

Honestly, this sideboard is a random collection of cards that I like. On average you don’t really want to be sideboarding all that much with this deck since your indiviudal cards are so powerful and you have a pretty streamlined strategy. However there are obviously matchups where you want Duress, like against Mono-Blue and Azorius control. One card that should be in the sideboard going forward is Torch Breath for the Mono-Blue matchup. You mainly want to be flexible with discard and removal spells, but it’s hard to replace cards like Invoke Despair in your five-mana slot, when that card is just so good regardless if you’re on the play or the draw.

Here’s how my matchups went throughout the day.

Funny enough I lost to Magic God Ivan Espinosa in round five playing for seeding, and immeidately got the 2-0 in the quartefinals. While our games were definitely close, I definitely felt that the games I won were due to me having aggressive draws and him drawing multiple painlands. My match in the semifinals was similar.

I was super happy with my choice and confident in my card chocies. Even though the deck doesn’t have as high as a ceiling as Esper or Grixis I mainly love how you can be more of a beatdown deck in those grindy matchups and have better mana. I love the deck’s streamlined approach and besides the random sideboard I was happy with all of my maindeck card choices.

There’s a reason the Pioneer deck and this deck share so many cards. Ultimately I wanted to play “the good ones” and did just that. However with a new Standard release and a few more on the horizon before the next Regional Championship it’s important to know what new cards will make an impact on the deck.

While my original list is solid, it has to be adapated for a brand new Standard format. We’re only into a week of The Brothers’ War Standard and I expect the format to shift with the printing of cards like Urza, Teferi, and expensive artifact mythics.

This is one card I’m looking to try. My first thought is to replace all the Graveyard Trespassers with this card. Trespasser is more important against opposing Underdogs and Dennicks, but ultimately Fleshgorger may in fact be the better card. Menace is huge when you have ways of taxing your opponent’s board with Bloodtithe, Liliana, and other removal effects. Casting the non-prototype version of Fleshgorger is also doable with how grindy the format is and by making treasure tokens with Fable of the Mirror-Breaker tokens. I could also see playing a split of this card and Trespasser, it’s certainly something I’m interested in testing.

This card is already a mainstay in Pioneer Rakdos, and for good reasons. Misery’s Shadow is a great mana sink that already plays into the deck’s somewhat aggressive nature. Shadow also lets you freely kill off Dennicks, Underdogs, and Valiant Veterans for good. I’ve only played with Shadow in prerelease events but having it in play felt miserable for my opponent’s when they didn’t have an easy way to remove it. Another reason I like this card is that if Grixis is at the top of the metagame I’d rather have this in my deck than Tenacious Underdogs that are going to get eaten by Corpse Appraisers. I don’t think I’d commit to playing the full four, but I think two copies is a good place to start.

There are actually not many cards from the new set I’d want to include in this strategy. The deck isn’t aggressive enough for Gix, Yawgmoth Praetor, and you’re already taxed in your three-mana slot. Go for the Throat is probably a better option than Infernal Grasp, but it all depends on what artifact strategies are in the format as it settles down. Dreams of Steel an Oil might be a better Pilfer effect in the mirror and Esper matchups, especially since you can take a Bankbuster and exile a flashback creature with it.

Brotherhood’s End is a decent sideboard card I’m happy to board against aggro decks. With the Meathook Massacre banned this is probably your go-to wrath in Rakdos colors for the time being.

Obliterating Bolt is a notable new removal spell, although I’m not sure it’s better than Abrade. Bolt not killing Sheoldred makes me hesitant to include it. All in all, Misery’s Shadow and Fleshgorger are the cards I’m excited to play most.

If I were to sign up for an event tomorrow this is the list I’d probably register:

2
Liliana of the Veil
1
Sorin the Mirthless


Good luck in your Arena events and RCQs! As always, thanks for reading.